We have a gravel roof on our house and the other day some workmen were up there fixing it. They had a block and tackle rigged on the edge of the roof, with a rope reaching to the ground, for the purpose of hoisting the tar and gravel. Our girl went out washing in the yard at the time, and somehow the hook on the end of the rope caught in her hoopskirt as she walked pass it.

The man on the roof was discussing the Darwinian theory, or the tax on rum or something at that moment, and seeing the rope shake he considered it was the signal to haul up, so without looking over the edge he began to wind the crank with velocity.

A moment later the next door neighbors heard fearful screams, and as they rushed to the windows they perceived an athletic exile of Erin swiftly ascending toward the blue, ethereal heaven.

The man at the crank fairly ached to look over and see what the noise was about but he couldn’t stop, he thought, until he got the bucket at the top. But he put on more vehemence, and in a moment he was amazed to see a human head, adorned with red hair, looming above the gutter spout. His first impulse was to let go the crank and run. But overcoming the earlier shock of fright he held on to the crank with one hand, while with the other he seized a handful of warm red hair and hauled the owner upon the roof. 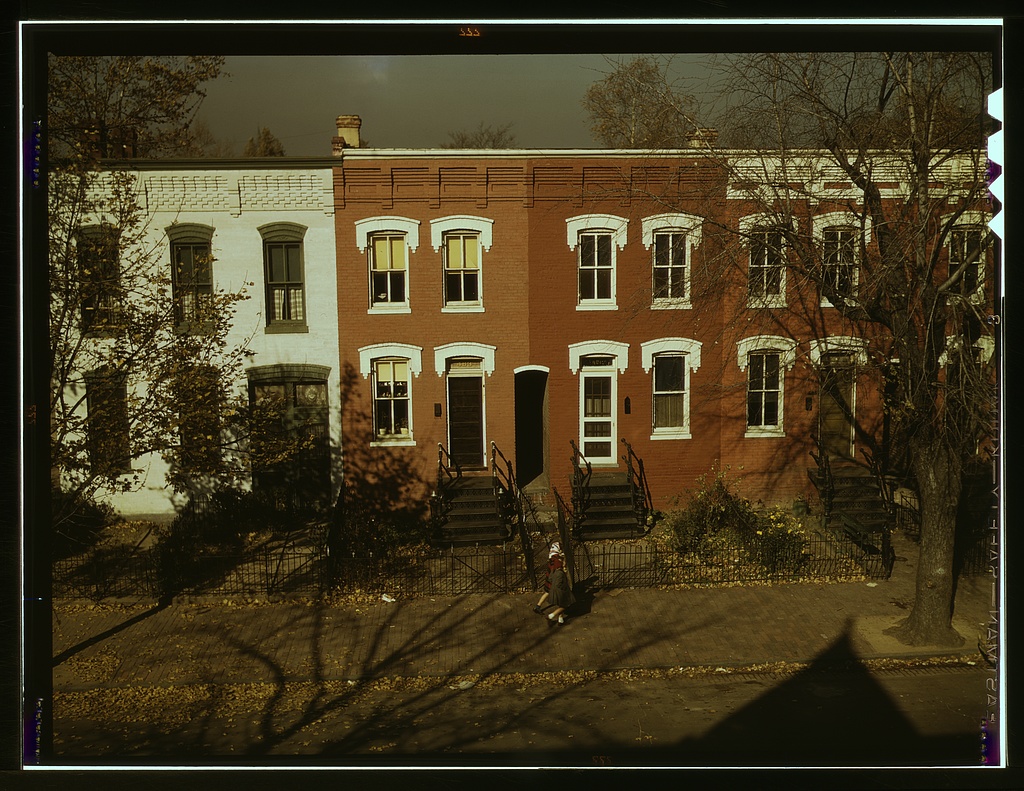 Row of houses (Library of Congress)

Row of houses joined together

We live in one of a row of houses which are all joined together, and they do say that the impetuosity with which that girl of ours charged upon the man who mussed her hair, and chased him over the roofs clear up to the corner, where he saved himself by crawling down the chimney flue was at once impressive and exhilarating.

She stood over that chimney expressing her views concerning the man’s present character and future prospects until she was exhausted, when she walked home to our roof, lifted the trap-door, descended – and went to bed. And when the man emerged and brushed the soot off him he confided to his colleague, while distributing the gravel, that he would rather dive at once into the bowels of a burning volcano than to meet that hired girl again in a place where there was no chance to run. (Max Adler)

VINEGAR OF THE FOUR THIEVES: Recipes & curious tips from the past a collection of household tips, medical cures, clothing care and old recipes from the 1800’s and 1900’s. Many of the tips, such as the household cleaners, cooking tips and ways to control pests, still work and are helpful in today’s ‘green’ environment while others such as ‘how to cure a dog of eating eggs’ will make you laugh. Either way, this book will help you appreciate the difficult life your grandparents endured.

Humor from 1910 United States census
He used bad English but got five dollars a second for talking?
Don't miss the stories, get a daily dose of history