(Note: The person interviewed was Mrs. Samantha Jane Turney, aged 85, a native of Harrison County, Arkansas, and a resident of Texas since 1881. Her husband was a doctor, coming into Brown County to take up the practice of medicine among the pioneer citizens of that county, settling near the little town of Blanket.)

We left Arkansas early in the spring of 1880. I didn’t want to leave my home, and I had heard so many awful tales of Texas that I just knew that it wasn’t safe to take three little babies to a place where Indians and outlaws ran free. Of course, most of the wild tales I had heard weren’t the truth, but I didn’t know that and I tried my best to keep the Doctor (her husband) from going. The Doctor thought that the pioneer country would have need of a good doctor and he believed that it was his duty to go out there and serve those settlers. Nothing I could say would cause him to change, so I had to come with him. 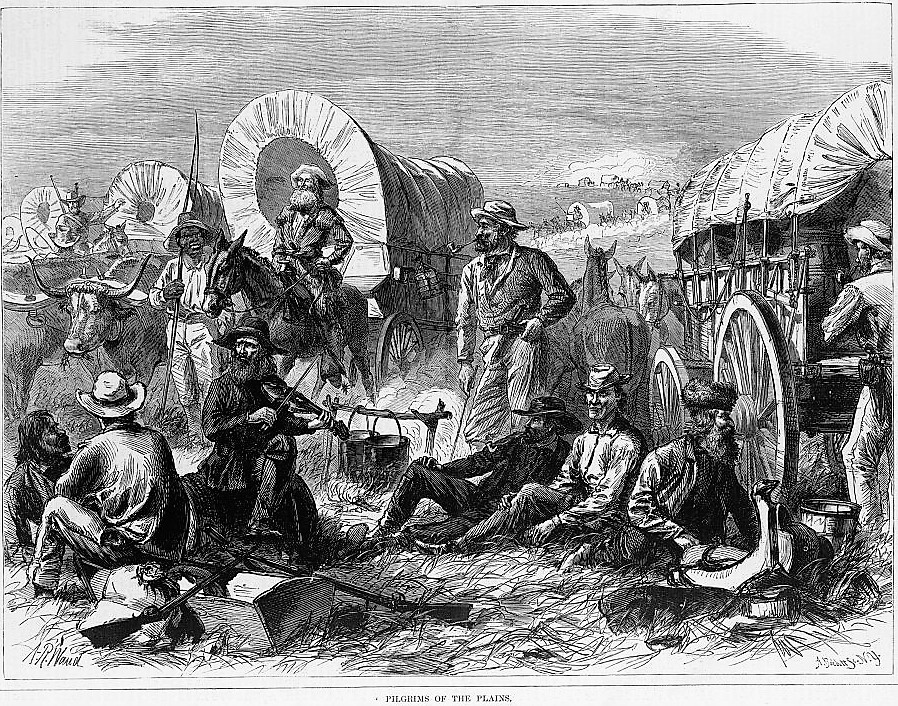 Didn’t get over crying for three days

I guess I was a baby because when we started (there were six wagons making the trip although some were just going to the edge of Texas, north of Dallas), I cried like a spoiled child. I didn’t get over the crying for three days and then there weren’t any more tears.to fall so I had to quit. Starting out really wasn’t so bad. There were flowers blooming everywhere and all the little creeks and branches were running full with clear, pure water. There was a lot of game and the men kept us well supplied with fresh meat.

Ten days out we were deep in Indian Territory (Oklahoma) and had turned south. I hadn’t seen a single Indian and was beginning to be ashamed that I had acted the way I did. On the evening of the eleventh day a band of seven Indians did ride up to the wagons just as we were camping for the night. All of our men folks held their guns ready but the Indians were friendly and just wanted to beg some tobacco. At least that was what they said they wanted and the Doctor gave each of them some of his “home-spun” and they left.

They were a friendly tribe

Those Indians didn’t look bad, just nasty naked and dirty. My babies had been scared pretty badly, not by the Indians but by having to hide in the bottom of the wagon. They knew that there was something wrong, and that scared them. The Doctor said that those Indians were from a friendly tribe, and that they wouldn’t bother anything except to steal anything that was loose. I couldn’t see why they would steal anything except food because they wouldn’t wear any clothes and they lived in tents and scanties and didn’t have any use for furniture, and they never did work so they didn’t need tools or harness.

On the morning of the fifteenth day another band of the Indians rode up. This time the wagons were strung out and I thought we would all be killed and scalped and my children carried off. Our men hurried to meet the Indians and all had their guns ready. I was in the first wagon and I loaded an extra gun of the Doctor’s and figured on protecting my babies.

We were jumpy the rest of the day

These were a different kind of Indians, they were just as naked, and just as dirty but they sat straighter on [their?] horses and were insolent. They didn’t ask for anything, they demanded it. They wanted food, tobacco, whiskey and some powder. The Doctor talked with them for a long time and I sweated like a nigger; afraid that those dirty Indians would start a fight and my husband would get killed. After what seemed like hours the Doctor gave them some biscuit and some tobacco and they rode off.

For the rest of the day we were all jumpy and the [women?] and children were scared. The men said there wasn’t anything to worry about, but they stayed close to the [wagons?] just the [same?] and we camped early. For the first time on the trip we made a circle of the wagons, but six wagons don’t make a big circle and the horses and a few cows that we had alone wouldn’t fit inside. These were hobbled and tied in a little [?] and one [man?] was left [there?] to stand guard. All night the men took turns standing watch and I guess the women were watching too, because none of us could sleep. I certainly did wish that I was back in Arkansas.

About an hour before day the men who had been left with the horses came running up and said [that?] he heard Indians off about a quarter of a mile. The men slipped down [to?] the draw where [the?] stock was tied, but when they got there, there wasn’t a single horse left. The Indians must have slipped up right close and had some other Indians make a noise off [somewhere?]. That was about the only way they could have cut the hobbles so quickly and got away. The whole thing didn’t take more than five minutes.

The men came back and laid under the wagons with their guns loaded and ready. Everybody was worried and more than a little scared. Then the sun came up and still nothing happened we seemed to get a little braver and did manage to cook up some breakfast. It was a sorry meal with everyone wondering what we [would?] do without any horses.

Said he would retrieve our horses

Around ten o’clock one Indian came toward the wagons, riding with his hand held up high in a peace sign. The Doctor went out to meet him and they talked for a few minutes and the Doctor came back. He said that the Indian said he knew who had stolen our horses and that he would get them back for us for a dollar a head. Our men talked a while but there wasn’t anything else to do so the Doctor went back and told the Indian to bring back the horses.

It didn’t take that thieving Indian an hour to bring back those horses. He had them staked out in the brush all the time he was talking to the Doctor and he probably helped steal them, too. There wasn’t anything we could do except pay a dollar a head for them and we did, although one [of?] the men wanted to shoot the Indian and get the money back. The [wagons?] were soon hitched up and we left as quick as we could, it seemed good to be leaving that place.

About five in the evening two Indians overtook us from behind and asked to talk to the Doctor. One Indian had gotten hurt and they wanted someone to cure him. I wouldn’t trust them, but the Doctor said that if they needed treatment he had to go. He didn’t get back until midnight, and I cried all the time he was gone because I thought I would be left a widow with my three babies and so far from home I never would get back. That was once in my life that I was [sorry?] my husband was a doctor.

When he did come back there was all the shouting you ever heard; the men grabbed up guns and waited for an attack, but the Indians were friendly and happy. The Doctor had cured the sick Indian (he had just had a bad stomach ache from swallowing tobacco juice) and the whole tribe had brought the Doctor to the wagons. Those Indians gave us back the money we had paid for the horses; gave us deer hides, antelope hides and more presents than you ever saw. They stayed around the wagons all the rest of the night, singing and dancing and eating. In the morning they helped us load up and harness and then the Chief of the tribe had four of the Indians to go with us to help us with the camp and to herd the horses at night so no other Indians would steal them and sell [them?] back to us. Those Indians stayed with us until we got to the Red River and we never did have any more trouble with Indians in Indian Territory. I changed my mind about being sorry my husband was a doctor and I’ve been right proud ever since.