In the 1850s, people would ride boats down the Tennessee River from Chattanooga to explore the famous Nickajack cave, then explore the cave for amusement. This is a description of one of those trips

A VISIT TO NICOJACK CAVE (NICKAJACK CAVE) IN 1852

‘Twas a damp and misty morning that we left the flourishing town of Chattanooga, destined to become the future Cincinnati of Tennessee. Our party were (was) safely on board the beautiful little steamer, the Ellen White, to whose gentlemanly Captain and Clerk, for their agreeable kindness, we pay the tribute of our thankfulness. 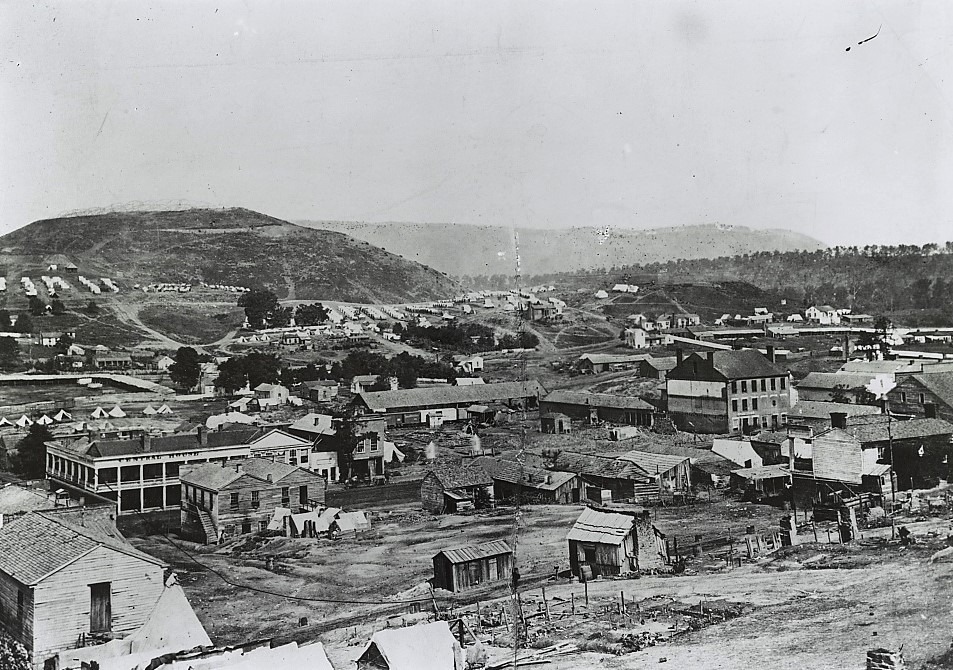 In the dim distance, old Lookout seemed bathing his greenwood locks in the dewy cloud that danced in airy motion around its summit, which parted at times by the cool breath of morning would reveal some tree-embowered spot, or some wild and romantic precipice. The sun had peeped out with its first sweet smile of affection on the woodlands and the wild flowers in the valley beneath, awakening them with its first warm kiss.

The dewy shroud that had slept all night in their embrace expanded in this holy vision and a little cloud rested tremblingly (as though it were sad and sorrowful to leave) within the branching trees and upon the flower’s swelling bosom. The sunlight beamed warmer and brighter, and the misty cloud winding around the mountain’s form kissed its giant brow and passed into the pale blue air of Heaven. 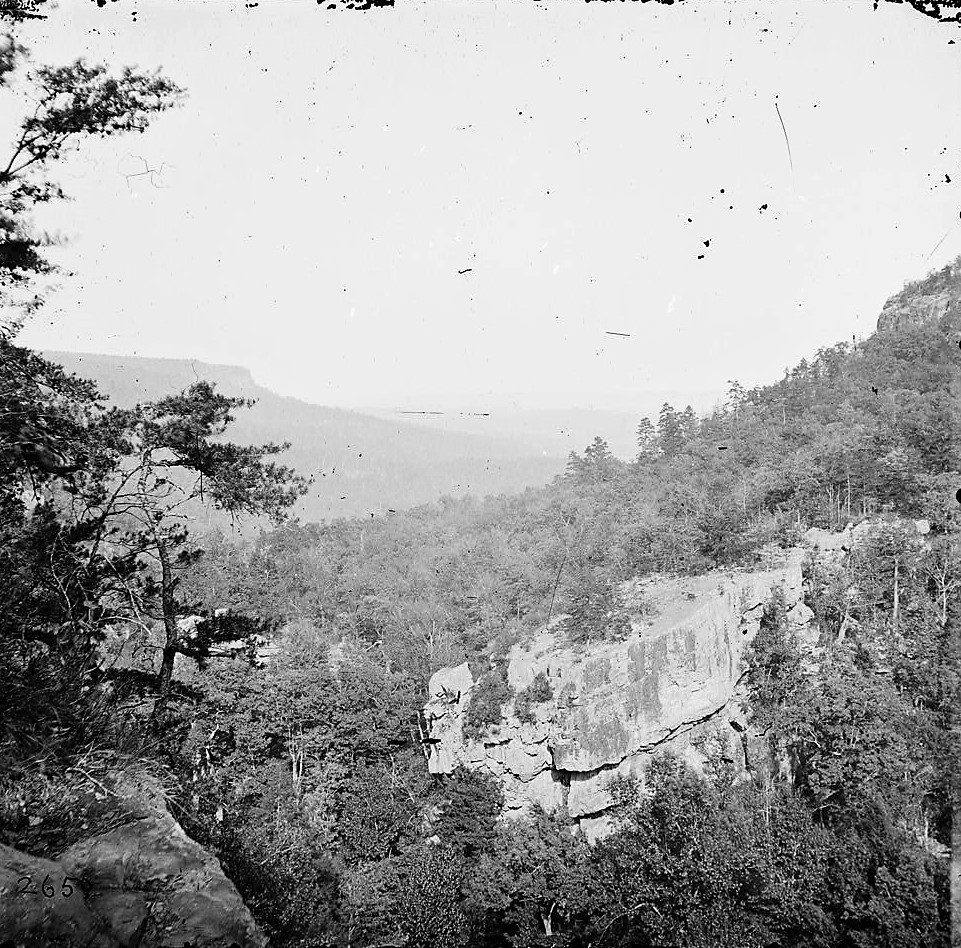 Steamer puffed on the waters of the Tennessee

The bell had tolled— the last plank had been shoved on board, and our steamer puffed and panted on the waters of the Tennessee. As beautiful as our imagination has pictured the “Castled Rhine,” with its legends of antiquity, its marvelous stories of superstitious terror, and its unequalled (sic) sublimity and grandeur of scenery, we would prefer for its home associations the rock-ribbed Tennessee. Its legends of antiquity may be buried in some deep cave near where its waters murmur, and its marvelous stories of superstitious terror may be engraved upon the rocky tablet beneath its peaceful bosom. We know the Indian character, but its lessons are too familiar to us. Years must pass away with centuries, and other generations must arise for whom tradition will invest with a garb of romance their life and their actions. Then will its beautiful and impressive scenery bear with it the charm of superstition and the

Its legends of antiquity may be buried in some deep cave near where its waters murmur, and its marvelous stories of superstitious terror may be engraved upon the rocky tablet beneath its peaceful bosom. We know the Indian character, but its lessons are too familiar to us. Years must pass away with centuries, and other generations must arise for whom tradition will invest with a garb of romance their life and their actions. Then will its beautiful and impressive scenery bear with it the charm of superstition and the traveller (sic) on its bosom will forget in its romantic existence the fabled greatness of the Rhine.

Stayed in a simple farmhouse

Our steamer continued on her winding way, making incessant echoes for the mountain sprites, who laughingly returned them. We passed down in safety the little falls known by such inharmonious names, and finally, after a trip of forty miles, we reached the place of our destination— the Nicojack Cave.

Soon after our landing, a lad made his appearance, and under his guidance, we set out on a path through the forest. A cornfield betokened civilization and a cottage, and soon we were pleasantly resting in those low seat, high-backed chairs essential to a country farmhouse. That afternoon we visited the Corner Stone of the States.

It is a simple block of limestone placed upright, bearing on three sides the names of Georgia, Tennessee and Alabama. It was here that our party performed the great feat of being in three States at the same moment. We spent a pleasant evening with our farmer host, who was a true specimen of the old school of independence. Simple and sociable, his manners would scarcely have been au fait in a city drawing room, yet he was pleasant and agreeable and his quaint remarks bore the charm of novelty. The accommodations here might not vie with those of the Pulaski, and the idea of sleeping in an open log house brings rather an amusing train of thought, while the comparative scarcity of doors leads one to suppose that he is a victim to appearances.

Visited the cave after breakfast

An early breakfast soon over, and our preparations all made, we started the next morning to visit the cave. A walk of about two hundred yards in a rocky path, winding around the base of. a mountain, brought us to our destination, where our guide instructed us as to its width, &c, which we here submit: width of Nickojack Cave at its entrance, 177 feet; height from the water to the roof, 48 feet; thickness of the roof above, 31 feet. The path we had followed led us into its upper entrance, on a ledge of rocks some 30 feet above the water. 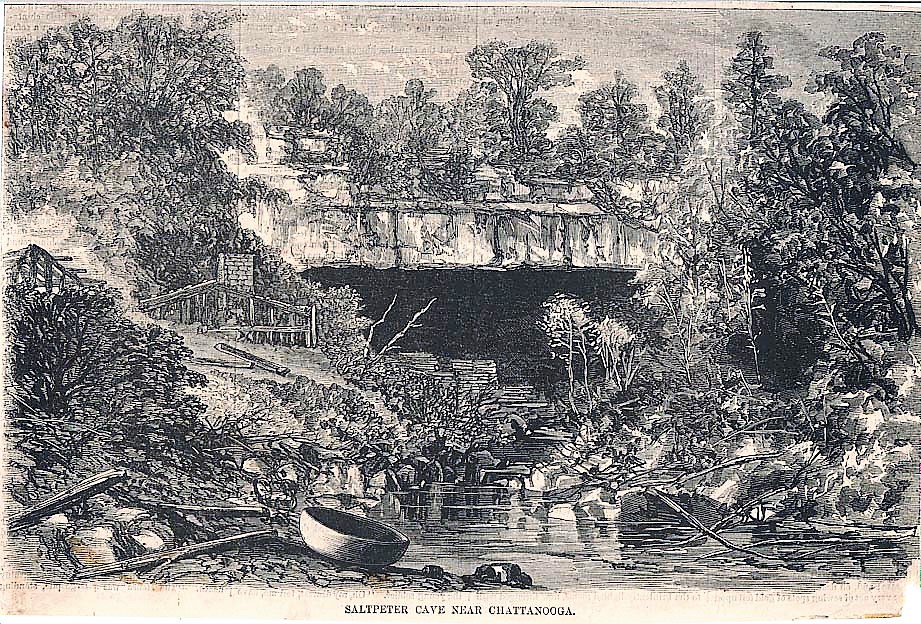 After lighting our pine torches, we descended the rocky hill to where our canoe lay in readiness; and after safely embarking, we commenced a more minute examination of the cave. We entered upon a little river, whose waters sleep uncheered by the sparkling sunbeams—silvered not by the moon’s soft radiance—nor awakened by the wind’s sweet sigh into murmurings; but with noiseless footstep stealing eternally through darkest night with no living companion to share its solitude, and so cold and icy in its embrace, that we fancied.

The dark-wing’d spirit of the flowing river

Of Death around us, with its ghastly smile

Placing an arrow in its open’d quiver,

From the slip’ry banks of some unseen isle.

Glided on the stream

Our feelings were peculiar while gliding over these hidden waters; the torch-light revealing its rough banks and the dim obscurity of its terraced halls, while beneath us the rocky bottom, varying in depth from two to eight feet, seemed clear and beautiful. The width of the stream we judge to be about 10 feet, with many a rocky cape and tiny bay. After proceeding in this way a mile or more, we were shut out by the rocks which had fallen into its bosom, forbidding us any further advance. We landed on an irregular pile, and ascending some distance, found ourselves on an even surface of rock, partially bounded, to which our party gave the familiar name of the Ballroom.

Continuing our explorations amidst scenery which afforded us no pleasure, on account of its sameness, we returned in our canoe and landed again about half-way to the entrance. Our party here divided, and taking one guide with us, we amused ourselves by climbing the rugged and slippery ascent from’ the river’s bank. The banks of this little stream, in some places, are composed of clay, which we found, by tasting, to contain a great portion of nitre, while the atmosphere of the cave is strongly impregnated with its gas. 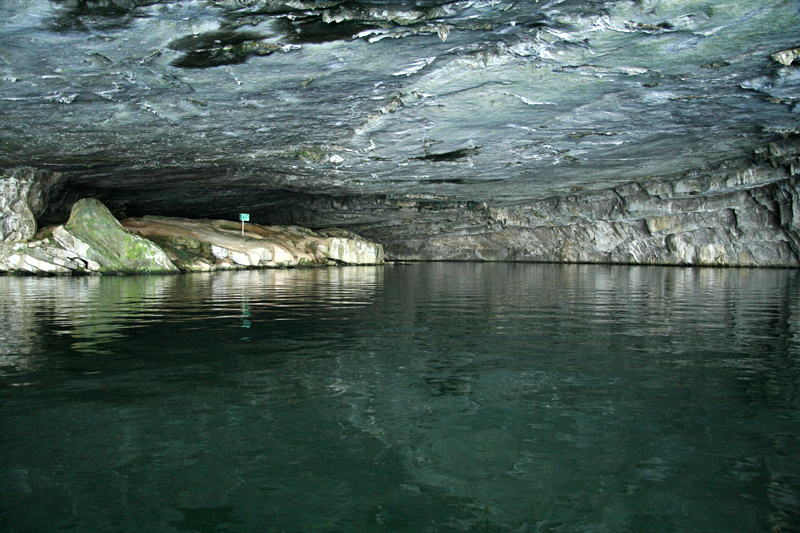 Guide had never entered the opening

We had now reached a little opening, which we essayed to enter. Our guide objected, on the ground that he had never visited it; but we overruled his objections. Ascending and descending from each rocky obstacle, winding around pillars perfect and graceful in their proportions, we reached finally (what seemed to us) the most beautiful part of the cave. A natural city lay before us, buried perhaps for ages. Two or more streets, parallel to each other, about one hundred feet in length, and wide enough for an Indian and his dark-eyed bride to wander in, wrapt in love’s deep dream, with an arched roof above and little caves on each hand, at regular intervals, resembling very much the habitation of man!

As we inscribed our names upon the rocky walls of this natural city, we thought perhaps the shades of the departed red men were gathered around us, anxious to decipher such strange hieroglyphics. We collected some few unpolished arrow-heads, to remind us of the city of the Past, and of the Indians who, perhaps, lived and loved within its rockbound limits. Having feasted our eyes upon this strange beauty, and our thoughts upon the past history, we essayed to return. The feeble torchlight cast but a lurid glare as we wound around pillars scattered in every direction! In this way many moments passed by, and as yet we could find no opening. The truth revealed itself that we were lost— the City of the Past had become our temporary prisonhouse. Our guide, a mere boy of 16, had become perfectly discouraged and frightened, but the ladies of the party — to their praise be it spoken—expressed but little fear, yet the pale cheek and anxious eye told more than words could express. We spent some time in anxious search and finally succeeded in obtaining egress.

Nothing daunted, we continued our explorations and visited the Batroom, where, we were told, at times, millions of these hideous creatures can be seen. We passed on and visited the Chalkroom, a large square room, so perfectly proportionate that it seems the work of art. We visited several other places of little interest and finally emerged once more into the glorious sunshine.

DYK: The phrase ‘Bites the Dust’ has a long history
A race war threatened to break out in Colorado in 1900
Don't miss the stories, get a daily dose of history