Do you know the name of the 26th most translated author in the world? You have probably read many of his books.

Here are some clues:

Can you guess his name yet? 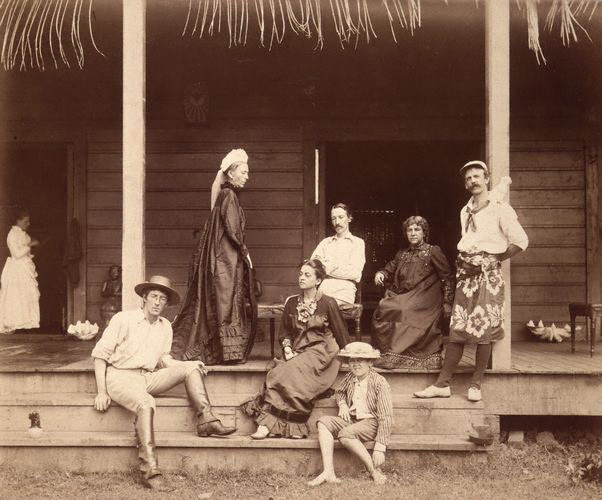 Robert Louis Stevenson with his wife in Vailima, Samoa, by J. Davis, photograph, circa 1891 (public domain)

How the Famous Novelist Died

Samoa, Dec. 4 – Robert Louis Stevenson, the eminent novelist, died at his beautiful home, Vaillma, on Monday last, the 2nd of December, in a very sudden manner. He had been busy at work until 4 o’clock, and had written what are said to be some of his finest passages, and he had left his work for dinner. He had gone into the kitchen with his wife to prepare some particular dish which he has a fondness for, and while there complained of a pain in the top of his head.

He went into his drawing-room, and almost immediately fell back unconscious in a chair. Medical advice was obtained; but it was useless, as he never recovered unconsciousness, and died at 8 o’clock. The community was greatly affected, and much regret is felt, although Stevenson met much opposition owing to his political views. Socially he was highly esteemed. Before his death, when in good health, he had expressed a wish to be buried upon the top of Vaca mountain, in a most romantic spot, 1,400 feet above sea level, known by the name of the “Praa, Sooalo” ( or pigeon-catching place at Sooalo), and his interment took place there yesterday in the presence of the intimate friends of the family.

Discordance: The Cottinghams Inspired by true events and the Cottingham family that resided in 17th century Somerset, Maryland, and Delaware, colonial America comes alive with pirate attacks, religious discord, and governmental disagreements in the pre-Revolutionary War days of America.

The Sound of a Diploma – an inspiring story of perseverance
The Umbenhauers – Pioneers of Pennsylvania – original farm stayed in the family for over 150 years
Don't miss the stories, get a daily dose of history