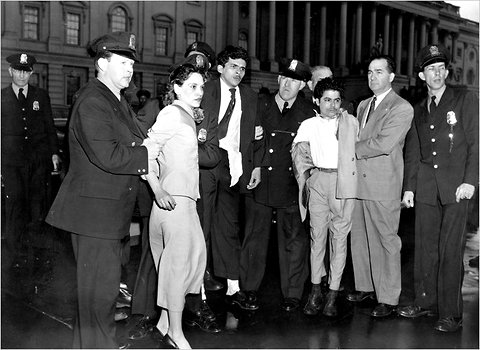 Capitol Police hold the Puerto Rican nationalists Lolita Lebron, Rafael Miranda and Andres Cordero as they were taken into custody on March 1, 1954, after a shooting from a House gallery.(Associated Press, NY Times)

This amazing film below recorded the event.

On the morning of March 1, Lebrón traveled to Grand Central Terminal in Manhattan, where she rendezvoused with the rest of the group. They took the train to Washington, DC, and went the short distance from Union Station to the Capitol. Rafael Cancel Miranda suggested they postpone the attack, as it was late and the weather was rainy. Lebrón said, “I am alone” and continued towards the Capitol building’s interior. The group looked at each other and decided to follow her.

When Lebrón’s group reached the visitor’s gallery above the House chamber, they sat while the representatives discussed the Mexican economy and issues of immigration. After Lebrón gave the order, the group quickly recited the Lord’s Prayer. She stood up and shouted, “¡Viva Puerto Rico Libre!” (Long live a Free Puerto Rico!) and unfurled the flag of Puerto Rico.The group opened fire with semi-automatic pistols directed toward the Representatives below.

On October 26, 1954, Judge Walsh found all of the defendants guilty of conspiracy, and sentenced them to six additional years in prison, for a total of 76 years each. Cancel Miranda, considered to be the primary shooter, received a prison sentence of 85 years.

DYK: True meaning of Moot Point
[vintage pictures] Some towns in the United States were declared unconstitutional in the late 1940s &50s
Don't miss the stories, get a daily dose of history