Today, when we cook on the stove or in the oven, we simply have to turn a dial or use the microwave and only push a few buttons to have our food ready in minutes. Our grandparents had much more to do when preparing meals. Simply starting and maintaining a fire in a coal burning oven was a major task as you can see by the directions below.

In order to manage a kitchen fire successfully, we must understand the construction and purpose of every part of the range. Much fuel is wasted, food spoiled, and time lost because women do not take the trouble to do this.

The range and its parts

A range or a cooking-stove is an iron box. It should stand upon a brick hearth, or a sheet of zinc, and the wall near it should be of brick or tiling, or else protected by zinc.

A range has the following parts:

Some ranges have other parts, – an oven for warming dishes, a water-front, more dampers, etc., – but the parts named above are all that are essential.

Distinction between a stove and a range. – A stove is movable, and usually, has one oven with two doors. A range may either be built into the wall (set), or stand out in the room (portable). 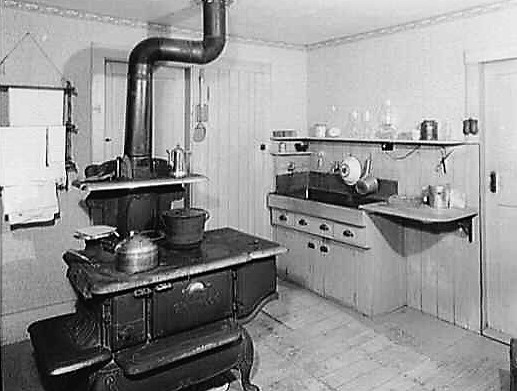 The range in detail

When the fire is out take off all the lids and as much of the top of the stove as is removable. Look first at the fire-box.

The fire-box is a rectangular space open at the top, lined on the sides with a fireproof material (fire-bricks), and having a movable grate for a floor.

Underneath the fire-box is the ash-pan. It should be emptied once a day, and the space around it brushed out.

The stove-pipe connects the range with the chimney.

The oven in a stove or a portable range is back of the fire-box. In a set range, there are generally two ovens, one on each side of the fire-box. An oven should contain a rack. Between the oven and the top, sides, and bottom of the range there is a space for the passage of air from the fire-box. This space must be cleaned occasionally to keep it from becoming choked with soot and ashes.

The dampers are slides or doors fitted to openings in the range. Below the fire-box is the front damper. In the stove-pipe is the oven damper, usually moved by a rod extending to the front of the range.

Management of the dampers

By opening the front, chimney, and oven dampers a direct draft is produced, the air passing from below the grate, up through the fuel in the fire-box, and out into the chimney. This arrangement of dampers is used to start the fire, or to increase the heat of a fire already burning. (Fig. 2. A.) If the front damper be opened, and the chimney damper closed, when a fire is starting, the smoke will come into the room. Why? The chimney damper should be so arranged that the opening in the stove-pipe is never wholly closed. 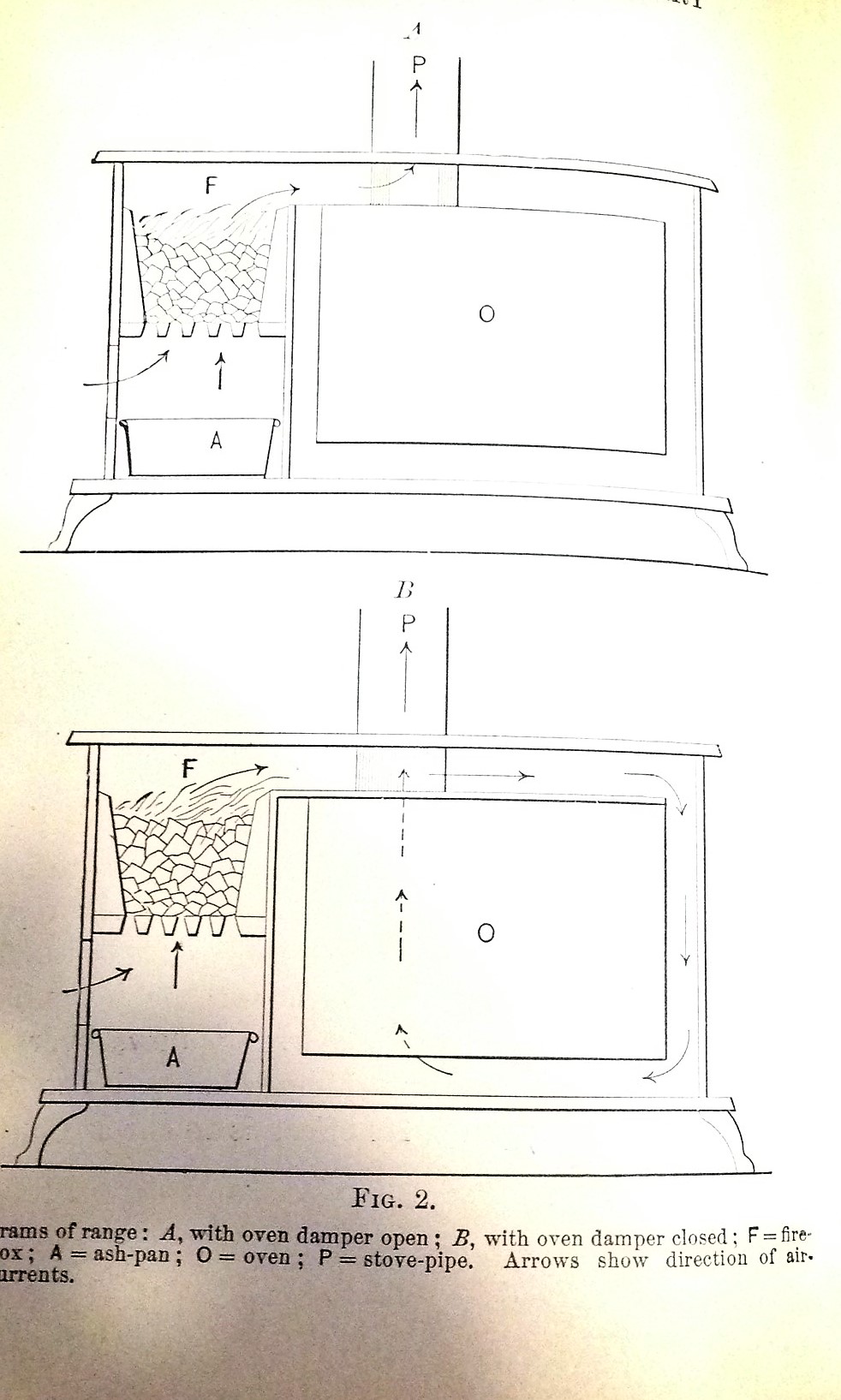 By closing the oven damper, the air heated in the fire-box is made to flow around the oven before entering the chimney. By this means the oven is heated, and the force of the draft at the same time lessened by its having to make its way around corners. (Fig. 2, B).

Observe carefully the mechanism of the chimney dampers. In some ranges, they are opened by pulling the handles out; in others by pushing in. The range in your home may differ in this respect from the one at school.

The check damper is in front

HOW TO MAKE A FIRE

Light the fire by applying a lighted match between the bars of the grate to the paper or shavings inside. (If the stove is to be blackened, do it now.)

When the wood is all ablaze, add coal until the fire-box is level full. (As the wood burns away the coal will settle. The fire-box should never be kept more than three-fourths full.)

What to do when the fire is well started 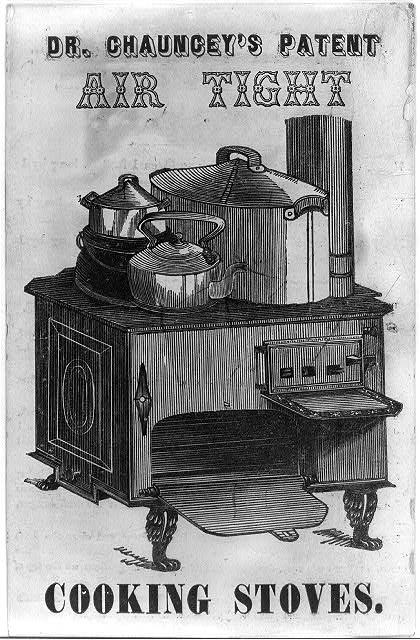 HOW TO MANAGE A FIRE

For a steady hot fire.

For a steady hot fire, rake out the ashes with a poker, from beneath the grate; or, if the grate is a revolving one, give it one turn. Fill the fire-box three-fourths full of coal. Open the lower front and chimney dampers. See that oven and check dampers are closed. When the coal in the lower part of the fire-box is glowing red, the top layer still black, and the flames yellow, close the dampers. When the top layer begins to glow, add more coal so that there will always be black coals on top.

To heat the oven – Open the oven and chimney dampers, keeping all others closed.

To keep a fire overnight – Fill the fire-box with coal; close oven, lower front, and chimney dampers, and open the check damper. 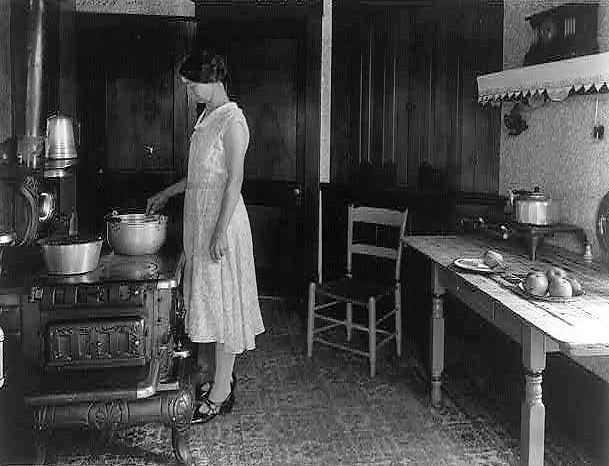 Farm woman cooking at stove in kitchen 1925 (Library of Congress)

Kindling-point – Why is it, with active oxygen always in the air, ready to devour, that chairs, tables, houses, do not take fire and burn? Simply because a substance must be heated to a certain degree before it will begin to unite with oxygen. Except for this, everything combustible should have burned up long ago. The temperature to which a substance must be raised before it will burn is its kindling-point. This point differs for different substances. See how we take advantage of this fact in starting a fire. We first light a match, the phosphorus1 on which kindles from the friction of striking, setting on fire the sulphur mixed with it. This, which has a somewhat higher kindling-point than phosphorus, in turn, ignites the wood of the match, the kindling-point of which is higher still. Coal will not take fire from a match, because its kindling-point is so high that the match burns out before the coal becomes hot enough to burn; but paper may be lighted from a match, wood from burning paper, and coal from burning wood.

1Phosphorus burns, though slowly, at the ordinary temperature. It must, therefore, be kept under water.

DYK: The phrase Katy bar the door dates back to the 13th century
DYK: Can you guess where the idiom to “Raise Cain” comes from?
Don't miss the stories, get a daily dose of history