I thought the whipping post and pillory days took place in colonial times but evidently, this punishment continued much longer in Delaware.

It wasn’t until March 1905 that Governor Preston Lea of Delaware finally signed a bill to abolish the pillory, but punishment by whipping post remained on the books in Delaware until 1972.

This is the story of a pillory and whipping that took place in 1890 from The Sunday Morning Star published on April 27, 1890.

THE “CAT’ IN SUSSEX

Biggest Game Since The Bank Burglars Hugged the Post

The whipping post and pillory of Sussex county, at Georgetown, had three victims of an unusual character, yesterday, when three men of good families and previously fair reputations were pilloried and whipped for horse stealing, of which crime they had been convicted. 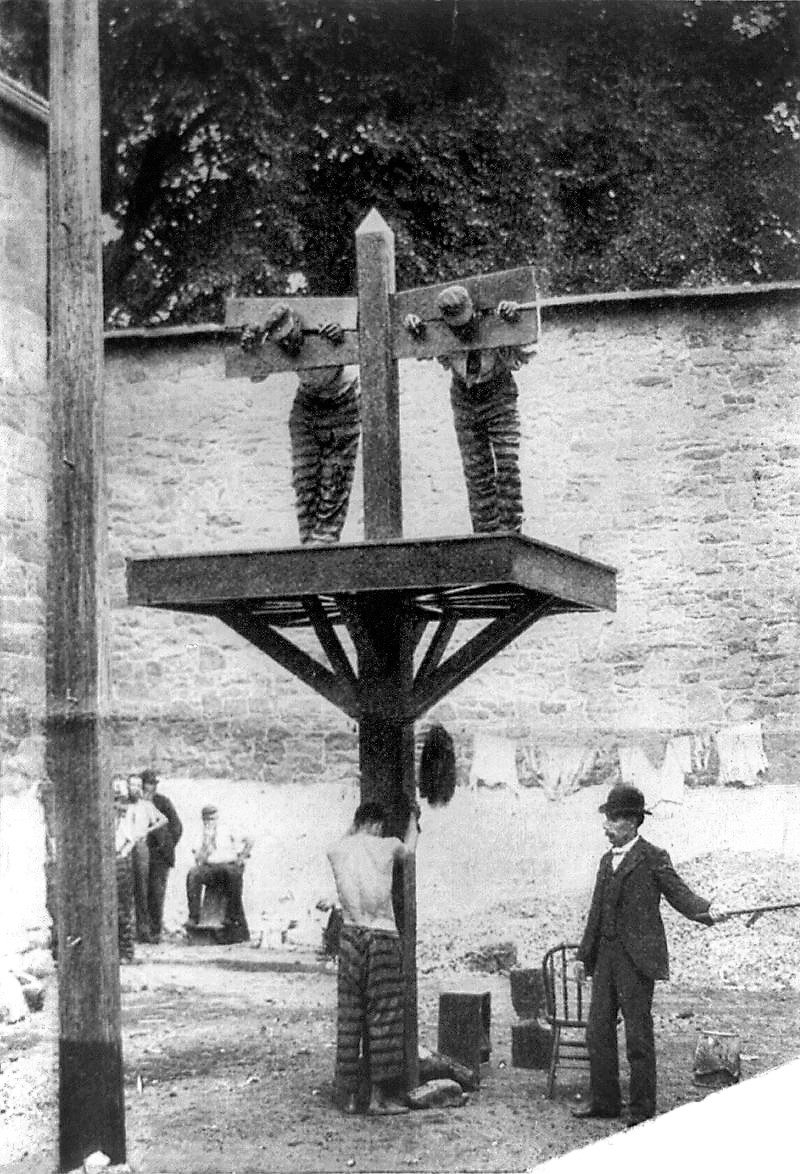 Combined pillory and whipping post in New Castle County Jail, Delaware, 1907. The pillory sits in an elevated position to increase its visibility, while the whipping post is at ground level to provide more room for the whipper. (Library of Congress)

The case was one of unusual interest. The victims were James Owens Isaacs, son of a respected farmer, who deserted his family several years ago, and has, it is said, been leading a wayward life; Joseph Hamilton, an old soldier, who squandered a bick (?) pension $1,200 about one year ago, and John T. Owens, son of a leading farmer, and heretofore of good reputation. The case was tried last week and occupied four days. The State had 40 witnesses and the defence about sixty. An attempt was made to prove an alibi, but the admissions and confessions of Hamilton before a justice of the peace, when the men were first arrested and given a preliminary hearing, were sufficient to insure conviction. The stolen animal was a mare, valued at $160, and was taken from the stable of Eli P. West, a farmer, living at Cross Keys, Dagsboro hundred, on the night of September 19, 1889.

The case was stubbornly fought and created much excitement among the farmers of Sussex county, by whom the prisoners are well known. The sentence of the court was: One hour in the pillory, 20 lashes, $200 restitution, costs of case, and one year in jail. Petitions were immediately drawn and every effort made to prevail upon the governor to remit the pillory and post, but without avail, and yesterday the corporal part of the sentence was carried into effect.

A crowd of over 300, the largest that ever assembled in Sussex county to see the sheriff wield the lash, assembled around the whipping post, and it was found necessary to stretch ropes to keep the people back. The pillory at Georgetown, unlike the one at New Castle, is not enclosed but stands in the open space in the rear of the Court House. It is in the corner of the public lot, and there is a street on two sides of the post. The post is directly in front of two newspaper offices, and close by are several lawyers’ offices. The pillory is also constructed differently from the one at New Castle and the change does not in any way add to the comfort of the victim.

Operations began promptly at 10 o’clock, when Hamilton was placed in the pillory. He bore his punishment without complaint and was then whipped.

Isaacs was then placed in the pillory. He complained with numbness in his hands after the first 15 minutes, and his arm and hand were rubbed during the remainder of the stay. He was taken out and whipped. As he was taken out he declared his innocence and said the guilty party would yet be brought to justice.

Owens was then placed in the pillory, and though restless he did not seem to suffer much. He was then whipped and, as in the other cases, the lashes were laid on lightly.

In the flagellation Sheriff Ward wielded a stout gum switch, instead of the cat-o’- nine-tails that forms the instrument of torture in New Castle. He used up two switches on each culprit’s back in administering the required number of lashes. All the men had reddened backs when they left the post, but no blood was drawn.

After the whippings the crowd dispersed and Georgetown soon resumed its usual condition of sleepy quietude.

VINEGAR OF THE FOUR THIEVES: Recipes & curious tips from the past Do you want to know Thomas Jefferson’s recipe for Vinegar of the Four Thieves or how to make Ox Tail Soup?
Have you ever had ‘blueberry pickles’, ‘batallia pie’ or ‘snow birds’? You will learn all this and more in “Vinegar of the Four Thieves.” This book is a collection of household tips, medical cures, clothing care and old recipes from the 1800’s and 1900’s. Many of the tips, such as the household cleaners, cooking tips and ways to control pests, still work and are helpful in today’s ‘green’ environment while others such as ‘how to cure a dog of eating eggs’ will make you laugh. Either way, this book will help you appreciate the difficult life your grandparents endured.

With Bonus: First two chapters of novel Ribbon of Love

One hundred and twenty years ago today, the modern Olympics first celebration took place in Athens
A lady’s dressing table in 1897 included borax, ammonia and sulphuric acid!
Don't miss the stories, get a daily dose of history