The Marais des Cygnes massacre was the last significant violence in the Bleeding Kansas events prior to the American Civil War. The violent confrontations took place between anti-slavery and pro-slavery factions between 1854 and 1861. At the heart of the conflict was the question of whether Kansas would allow or outlaw slavery, and thus enter the Union as a slave state or a free state. Missouri ruffians like Charles Hamilton led raids into Kansas to steal goods and harass freestaters.

Last Survivor of a massacre

By the death of Austin W. Hall, near Trading Post, in Linn County, the last of the six survivors of what is known as the Marias des Cygnes Massacre has gone. The massacre occurred on May 19, 1858, at a time when the border war between Kansas and Missouri was at its height. On that date Captain Charles A. Hamilton appeared in Linn County with a band of armed Missourians and captured eleven Kansas settlers.

These prisoners were marched in a body to the Missouri line and then at the command of Captain Hamilton they were lined up for execution. At the word “fire,” a volley was poured into them at close range and all fell to the ground. Five were instantly killed, five were seriously wounded, and one, the Austin Hall who has just died, escaped all injury. Hall and the wounded men had the presence of mind to simulate death, however, and the Missourians rode away without making a close investigation. 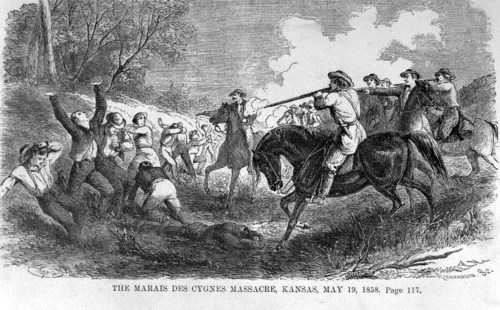 In 1863 William Griffith, one of Captian Hamilton’s men, was arrested in Platte County, Mo., on the charge of murder. He was brought to Mound City, Linn County, and given a trial in the District Court, the presiding judge being the late Solon O. Thacher, of Lawrence. The jury found the prisoner guilty of murder in the first degree. Thereupon Judge Thacher sentenced him to death, and on October 30, 1863, he was hanged, his executioner being William Hairgrove, one of the survivors of the massacre. The State of Kansas is erecting a monument at the scene of the Marias des Cynes slaughter.

Bestselling novel RIBBON OF LOVE: 2nd edition – A Novel of Colonial America (Tapestry of Love Book 1) is the story of a first family in colonial America who fled to America to escape religious persecution, and eventually migrated to Alabama before it became a state.

Lowell, Vermont – Hard times gripped the town in 1936 as can be seen by these [old photographs]
Occupation of stenographer gone due to invention of phonograph?
Don't miss the stories, get a daily dose of history