How to discover a medical quack

Hon. David Paul Brown, of the Philadelphia Bar, relates the following good story in a late work of his:

A quack had instituted a suit for medical services against one of his neighbors, and the suit being brought for the use of another, became himself the witness. 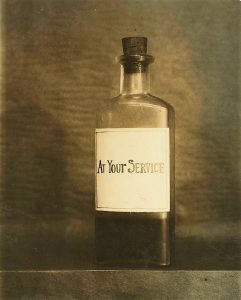 The Medicine bottle 1913 by Lewis Wickes Hine (Library of Congress)

A Mr. Williams, who was employed to defend the suit and expose the quackery and ignorance and worthlessness of the service rendered, subjected the doctor to the following examination:

Occupation of stenographer gone due to invention of phonograph?
DYK: Wear your heart on your sleeve means to display your emotions
Don't miss the stories, get a daily dose of history