This is a transcribed interview with George Dodge

Mr. Dodge was lying on the studio couch reading the American Magazine, his bull dog curled up asleep beside him when we finally found him home. His bachelor son, John, was in the kitchen finishing the supper dishes.

Three years ago shortly after his wife died, Mr. Dodge said, “No, I won’t have any hired woman fussing around, the houses trying to take Martha’s place.” The townspeople thought he would change his mind, — but still, — after three years of coming home from work to a cold house, unmade beds and an empty table (except when there wasn’t time to do the breakfast dishes) no other woman has “fussed around the house, trying to take Martha’s place.” Not that it wouldn’t be less expensive to have a hired woman, for he readily admits that they could easily save her wages on home-baked cakes, pies, nd bread, instead of bakery food.

Since the death of his wife, Mr. Dodge’s bull dog, “Mickie”, has been his most constant companion. She sleeps in his bed — not ON it, but crawls down to the foot or up on the pillow, whatever her wish may be, and sits near his chair at the table. If in a playful mood she carries off one of his socks or destroys the newspaper — “She’s only a dog and doesn’t know any better,” he says. A housekeeper may not be essential, but a dog is. With undefeatableness, characteristic of the Yankees, and despite his seventy years and a poor heart, Mr. Dodge, a mason and carpenter by trade, continues to work whenever the opportunity arises.

Of medium stature, with a ruddy complexion that reflects a healthy life in the open, smooth shaven and with kindly brown eyes, Mr. Dodge’s speech is slow, mild and pleasant and it seems that he weighs each word, ounce for ounce. He never bellows as many country people do, when you sometimes think they have forgotten that they are talking to a person instead of yelling at the old grey mare. There is actually more inflection in Mr. Dodge’s eyes than in his voice. At any surprising statement made, and often when he asks a question, he elevates his eyebrows a half inch. 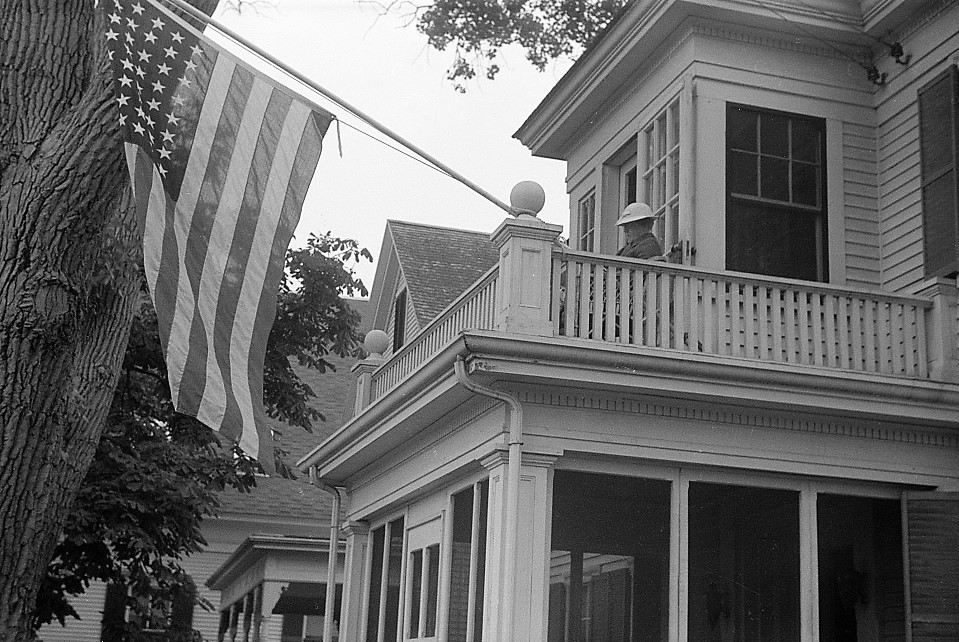 Lived his whole life in a small town

Although Mr. Dodge has lived in the small town of Worthington (population 500) his entire seventy years — except for one winter spent in the South — he is not restricted by environment. He keeps up with current events, spends much of his spare time reading worth-while books, enjoys company (he is a good listener as well / as an interesting conversationalist) and it is doubtful if anyone was ever in his house at meal time who was not urged to stay. He attends almost every country fair in the vicinity of his home town, occasionally goes to the movies, enjoys eating out and is well aware of the fact that a napkin is a napkin and not a handkerchief inadvertently left by the last patron as one hill towner is said to have thought.

Mr. Dodge’s self-appellation of “hayseed” is hardly suitable, for beneath the rough overalls and weatherbeaten face there is a quiet dignity and refinement. Candor is undoubtedly one of his most outstanding characteristics. He in very apt to tell a person what he thinks without waiting for the individual to be out of ear shot. He is somewhat lacking in tact and suavity, but at any rate, he is honest. He is typical of the old Yankee residents of the Berkshire Hills, independent, self-reliant, earnest and quiet. To the outsider, Mr. Dodge may appear taciturn, difficult to know and approach. To those who understand him, he is friendly, kind-hearted and sincere.

It wasn’t half as bad as when I was young

Mr. Dodge settled down in his old armchair, puffing a cigar and affectionately stroking Mickie, his bull dog, who snored lustily in his lap. “Well, I guess I’m a Yankee all right. My father’s people were some of the first settlers in old Deerfield. My mother’s people came here in 1700 and many of them settled in Chesterfield. I was born in Worthington, on a small scrabble farm of about one hundred acres. We were poor. My father eked out a living the best way he could [for?] there was no way of earning a dollar.” “We hear a great deal of fussing about how hard times are these days but it isn’t half as bad as when I was young. Why this depression is nothing compared with the depression right after the Civil War. In 1876 there were the hardest times I ever saw. That was THE great depression. There was hardly any money in circulation. No business was being done. Men worked for fifty cents a day — sometimes less — if they could get any work. The roads were full of people tramping who couldn’t find anything to do.

These tramps — they weren’t real tramps, but rather poor people trying to find work — followed the railroad mostly; but once we counted seventy-five who passed by our house in only a few hours. Nothing was done to help people then. There were no subsidies from the state or national government, although a few became town charges and that was one of the big expenses of the town at that time. Some of the tramps begged along the way and were fed, but none were ever arrested for vagrancy.” 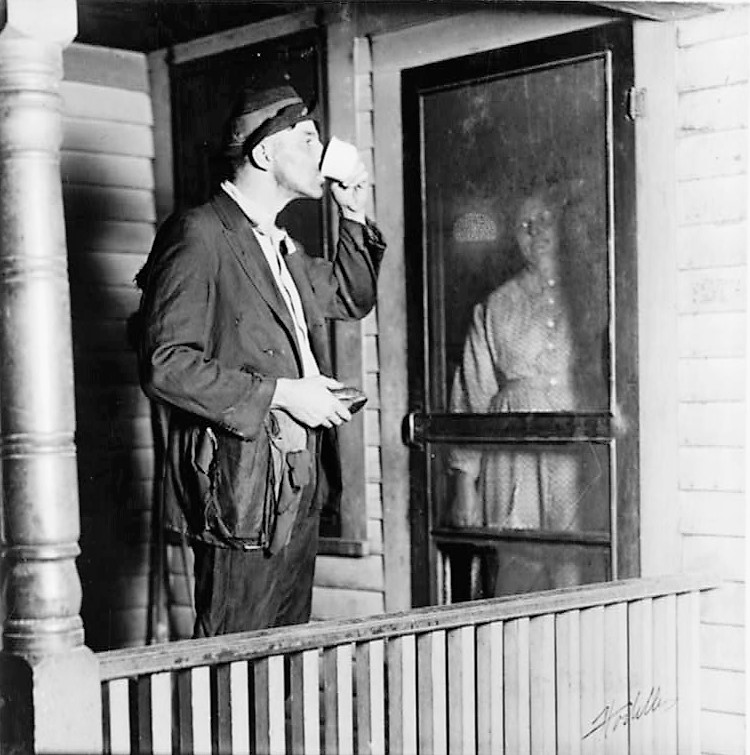 Tramp standing on porch with food & drink given to him by woman standing inside house, 1919 (Library of Congress)

Practically all the income we had

“At that time my mother had a home dairy and sold butter for twelve cents a pound and we had a sugar orchard and made sugar for six and seven cents a pound. My mother also raised a flock of turkeys that brought only twelve and fourteen cents a pound dressed. That was practically all the income we had. Those were very hard times. The depression lasted seven or eight years. Things didn’t get better until along in the 80’s.”

“Times weren’t half as easy for people then as now. Money was scarce and we had no modern farm equipment to make work easier. You didn’t get far from home very often, for when you made a trip it took time and a lot of trouble. Each little group of neighbors made a community by themselves, doing things for each other and all enjoying the same kind of good times.”

“They had lyceums every winter in the district where I lived; and they used to gather — every school house full (over a hundred people sometimes) to discuss the different problems of the day. The townspeople had regular debates from the platform and a committee decided who won. Those lyceum meetings were about the only entertainment we had except church. Once in a while they had kitchen dances, out they didn’t have orchestras like they do now. They only had an old-fashioned violin player. The lyceums were one of the pieces where the young men used to take their ‘best girls’.”

Boys were satisfied with very little

“You know when I was young , boys were satisfied with very little. If I went to the cattle show and had ten cents I thought it was a lot. Give a boy ten cents today and he doesn’t think it’s anything. The present generation have too much. They don’t appreciate anything. They’ve come to the end. There’s no thrill left in anything. They’re more discontented. We had to work hard and we didn’t have all of the modern conveniences they have nowadays, but I think we were move happy. It isn’t that I disapprove of advancement — for I have electricity here at the farm, a furnace, a radio, an electric washing machine, running water, a bath room — and my son owns a car. It is only that I believe such things have contributed to the discontent of the present generation.”

“Young people didn’t drink or smoke when I was young. The young men might take a glass of hard cider once in a while but there was no heavy drinking like there is nowadays. People were mighty strict when I was a boy. On Saturday night we always had to begin to keep Sunday. Sunday was from sun-down Saturday night until sun-down Sunday night. My grandmother, who lived with us, was very strict. If any of us went out to play Saturday night she would say to my father, ‘Edwin, you get those boys right in here.’ We couldn’t 4 even work on Sundays. They had a lot of respect for the Sabbath in those days. Almost everyone went to church. It was a meeting time for the townspeople and after church they got together and talked. Now they hold meetings only once a year in the church I attended. They’ve lost so much that is important. and worthwhile. I don’t suppose it could be helped. Life just speeded up and the young people speeded up with it, but it’s too bad. I’m glad I lived my life in calmer days – weren’t easy days, but they were a lot happier to my mind.”

Mr. Dodge was lost in thought. There was a faint smile on his wrinkled face as he sat patting Mickie and thinking far away and long ago thoughts. It was time to go. Mr. Dodge was seeing things we never knew.

DYK: The saying ‘beyond the pale’ has nothing to do with color
DYK: The origin of this saying is not hard to understand . . .
Don't miss the stories, get a daily dose of history