“The Perryman Ranch was established before Oklahoma statehood and is the Creek allotment of Mose S. Perryman, son of Tulsa’s “First Family,” George and Rachel Perryman.” (Perrymanranch.com)

In 1860, there was a little Creek Indian town of Sodom on the north bank of the Arkansas River, in a section the Indians called Chocka Bottoms, where Mose Perryman had a big farm or ranch for a long time before the Civil War. That same year, on October 17, I was born on the Perryman place, which was northwest of where I live now in Muskogee; only in them days Fort Gibson and Okmulgee was the biggest towns around and Muskogee hadn’t shaped up yet. 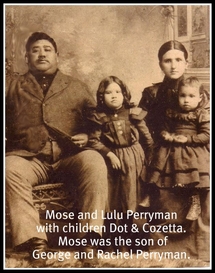 Best-known Creeks in the whole nation

My mother belonged to Mose Perryman when I was born; he was one of the best known Creeks in the whole nation, and one of his younger brothers, Legus Perryman, was made the big chief of the Creeks (1887) a long time after the slaves was freed. Mother’s name was Eldee; my father’s name was William Mclntosh, because he belonged to a Creek Indian family by that name. Everybody say the Mclntoshes was leaders in the Creek doings away back there in Alabama long before they come out here.

With me, there was twelve children in our family; Daniel, Stroy, Scott, Segal, Neil, Joe, Phillip, Mollie, Harriett, Sally and Queenie. 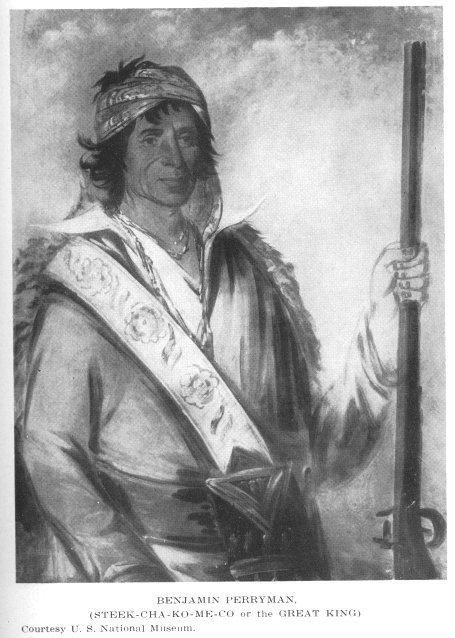 Tree fell on him

The Perryman slave cabins was all alike just two-room log cabins, with a fireplace where mother do the cooking for us children at night after she get through working in the Master’s house. Mother was the house girl cooking, waiting on the table, cleaning the house, spinning the yarn, knitting some of the winter clothes, taking care of the mistress girl, washing the clothes yes, she was always busy and worked mighty hard all the time, while them Indians wouldn’t hardly do nothing for themselves.

On the Mclntosh plantation, my daddy said there was a big number of slaves and lots of slave children. The slave men work in the fields, chopping cotton, raising corn, cutting rails for the fences, building log cabins and fireplaces. One time when father was cutting down a tree it fell on him and after that he was only strong enough to rub down the horses and do light work around the yard. He got to be a good horse trainer and long time after slavery he helped to train horses for-the Free Fairs around the country, and I suppose the first money he ever earned was made that way.

They plan to run away

Lots of the slave owners didn’t want their slaves to learn reading and writing, but the Perrymans didn’t care; they even helped the younger slaves with that stuff. Mother said her master didn’t care much what the slaves do; he was so lazy he didn’t care for nothing.

They tell me about the War times, and that’s all, I remember of it. Before the War is over some of the Perryman slaves and some from the Mclntosh place fix up to run away from their masters.

My father and my uncle, Jacob Perryman, was some of the fixers. Some of the Creek Indians had already lost a few slaves who slip off to the North, and they take what was left down into Texas so’s they couldn’t get away. Some of the other Creeks was friendly to the North and was fixing to get away up there; that’s the ones my daddy and uncle was fixing to join, for they was afraid their masters would take up and move to Texas before they could get away.

Break for the north

They call the old Creek, who was leaving for the North, “Old Gouge” (Opoethleyohola). All our family join up with him, and there was lots of Creek Indians and slaves in the outfit when they made a break for the North. The runaways was riding ponies stolen from their masters.

When they get into the hilly country farther north in the country that belong to the Cherokee Indians, they make camp on a big creek and there the Rebel Indian soldiers catch up, but they was fought back.

Then long before morning lighten the sky the men hurry and sling the camp kettles across the pack horses, tie the littlest children to the horses hacks and get on the move farther into the mountains. They kept moving fast as they could, but the wagons made it mighty slow in the brush and the lowland swamps, so just about the time they ready to ford another creek the Indian soldiers catch up and the fighting begin all over again.

Tried to fight off the soldiers

The Creek Indians and the slaves with them try to fight off them soldiers like they did before, but they get scattered around and separated so’s they lose the battle. Lost their horses and wagons, and the soldiers killed lots of the Creeks and Negroes, and some of the slaves was captured and took back to their masters.

Dead all over the hills when we get away; some of the Negroes shot and wounded so bad the blood run down the saddle skirts, and some fall off their horses miles from the battle ground, and lay still on the ground. Daddy and Uncle Jacob keep our family together somehow and head across the line into Kansas. We all get to Fort Scott where there was a big army camp; daddy work in the blacksmith shop and Uncle Jacob join with the Northern soldiers to fight against the South. He come through the war and live to tell me about the fighting he been in.

He went with the soldiers down around Fort Gibson where they fight the Indians who stayed with the South. Uncle Jacob say he killed many a man during the war, and showed me the musket and sword he used to fight with; said he didn*t shoot the woman and children – just whack their heads off with the sword, and almost could I see the blood dripping from the point! It made me scared at his stories.

The captain of this company want his men to be brave and not get scared, so before the fighting start he put out a tub of white liquor (corn whiskey) and steam them up so’s they’d be mean enough to whip their grannie! The soldiers do lots of riding and the saddle-sores get so bad they grease their body every night with snake oil so’s they could keep going on.

Uncle Jacob said the biggest battle was at Honey Springs (1863). That was down near Elk Creek, close by Checotah, below Rentiersville. He said it was the most terrible fighting he seen, but the Union soldiers whipped and went back into Fort Gibson. The Rebels was chased all over the country and couldn’t find each other for a long time, the way he tell it.

Settled in Fort Gibson after the war

After the war our family come back here and settle at Fort Gibson, but it ain’t like the place my mother told me about. There was big houses and buildings of brick setting on the high land above the river when I first see it, not like she know it when the Perrymans come here years ago. 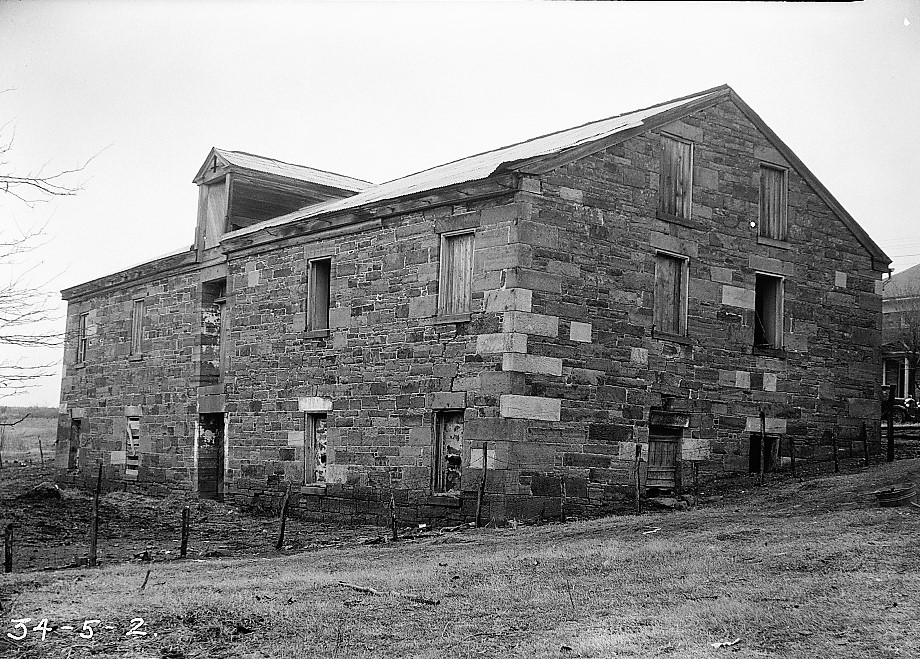 She heard the Indians talk about the old fort (1824), the one that rot down long before the Civil War. And she seen it herself when she go with the Master for trading with the stores. She said it was made by Matthew Arbuckle and his soldiers, and she talk about Company’s B, C, D, K, and the Seventh Infantry who was there and made the Osage Indians stop fighting the Creeks and Cherokees. She talk of it, but that old place all gone when I first see the Fort.

Then I hear about how after the Arbuckle soldiers leave the old log fort, the Cherokee Indians take over the land and start up the town of Keetoowah. The folks who move in there make the place so wild and rascally the Cherokees give up trying to make a good town and it kinder blow away.

My husband was from Banks, but the boy I got ain’t my own son, but I found him on my doorstep when he’s about three weeks old and raise him like he is my own blood. He went to school at the manual training school at Tallahassee and the education he got get him a teacher job at Taft (Okla), where he is now.

DYK: You’ll never believe where the phrase ‘Son of a gun’ comes from. . .
DYK: Have you ever heard the phrase ‘loose cannon’ when describing someone?
Don't miss the stories, get a daily dose of history