Our ancestors did not have Television, nor video games to entertain them, but they still had fun. They often played parlor games or other board games on the dining-room table.  These are some of the popular games in 1900 in Boston, Massachusetts.

A great impetus has been given to games this year, and there are many decided novelties. “The Pig that went to Market” is a most ingenious one; it is played on a large dining or other table, the larger the better, or a billiard table covered with an American cloth; on these the several obstacles must be set, consisting of arches and slopes, with a red-roofed market-house in the centre, the inclines leading into it.

Each player is furnished with a whip having a brass ball at the end, and with a pig which takes the form of a chocolate-tinted cube, having a point at one end. Each pig is placed with his snout in position behind an obstacle, and it has to be sent through these by means of the whip; only the ball may touch the pig. Of course, there is a great deal to learn in the use of this, and skill and practice are required.

Any number of persons can play; if there are more than four they must be divided into different heats. The first player to ring the bell in the market-house with his pig is the winner, says London Queen. ‘

“Carroms,” which hails from Canada, is a fascinating parlor game not unlike “Croquedille,” and can be played by two or four persons. It requires a board apparently made of satinwood, with a pocket at each corner and india rubber cushions, as on a billiard table. There are twenty-nine discs, twelve white, twelve black, four red (shooters) and one green. In order to shoot, the first finger is held firmly and the disc is introduced between the second finger and thumb. It is necessary to place the finger close to the disc when shooting, as the proper shot is more of a push than a snap. The object of the game is for each player to endeavor to put his men in any of the pockets. The twenty-four white and black discs are placed in the centre of the board, the green one on the centre spot. Thirty points is the usual limit of the game, and the player may shoot each time from his own base line. 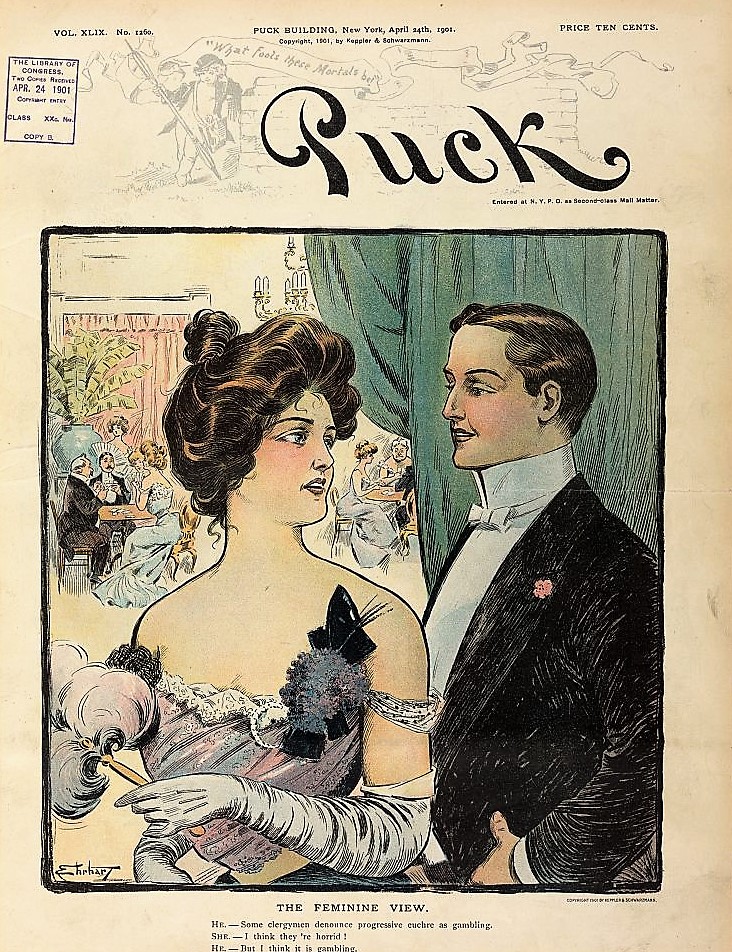 Salta and Bomble were new games

“Salta” is a new game which will probably have a great following: it requires a board like that for draughts, only larger, and has three rows of men and representing the sun, moon and stars, and demands a good deal of play.

“Bomble” is a new French family game. It requires a board with a basin in the centre called a prison; there are four compartments of different colors at the base of each board, which indicates the color of the players, and the game is always carried on by as many active players as there are boards. Each player places himself in front of one of these boards, and is provided with a rod, which he holds between the thumb and forefinger in the inclined position, so that the ball at the end of the rod may be able to move easily between the two barriers, and at the same time the rod always be in touch with the ball. A player throws the loose ball onto the game in any direction he pleases, a ball rolls down one of the boards, and the player, by the help of his rod, tries to prevent it getting into any of the departments, but endeavors instead to get it into the prison.

Games for the dining-room table

“Gossima” is an old friend with a new face, and is, in fact, table lawn tennis: the centre net is set up in the middle of a dining-room table six feet by three feet, or larger, and the height of the net is from eight inches to six inches. It is played with a ball and servers, but there is no second service as in lawn tennis, and volleying is not allowed. The player who first wins six games secures a set.

“Loosette” is a good game. For this the board should be placed on a chair or a table, and any number of persons may play, singly or as partners. The order of play having been decided, each one in turn takes the five discs, and, standing about six feet from the board, endeavors to throw one through the slot, hole or trap, as he pleases. The discs remaining on the top tray score one point each, those which pass through the hole or trap count according to the divisions in the lower tray, those that pass through the lower count twenty. Whoever gains 200 first wins, and the scores may be taken on a cribbage board. The game ver much resembles that of “Frog” and it has a great deal to recommend it. On the top shelf is a cage and a silo through which the discs descend. Parlor golf is amusing, and is intended to be played on the floor with two holes.

“Barraquette” has a numbered board, and the pieces are rolled into it: It is rather like bagatelle on a small scale. “The Transvaal” is an amusing war game, but too elaborate to describe. “Shopping” is a cheap cardboard game, but, nevertheless, very amusing. It strives to teach the art of buying and selling. Its object is to interest the young people accustom them to the proper spending of money. Each card bears the name of the shop and the articles it can supply. The players choose their trade, several shopkeepers are supplies with money tokens, and every article asked for must be paid for at the price set on the other side of the card. Shopkeepers can give change from the cash they have received, but not from the cash they have to spend; and he who spends his cash first wins the game.

Discordance: The Cottinghams (Volume 1) Filled with drama, suspense, humor, and romance, DISCORDANCE continues the family saga from the Tapestry of Love series with the children of Mary Dixon who married Thomas Cottingham. Inspired by true events and the Cottingham family that resided in 17th century Somerset, Maryland, and Delaware, colonial America comes alive with pirate attacks, religious discord, and governmental disagreements in the pre-Revolutionary War days of America

In 1936, a young fifteen-year-old girl broke the glass ceiling in high school sports
The historic Sansay House in New Jersey has a sad story connected with it
Don't miss the stories, get a daily dose of history