Many politicians and citizens in America have referenced the words and desires that our founding fathers had in mind regarding the future of the United States. I always believe that it is important to read the actual words rather than rely on interpretations made by others. However, most documents are exceptionally long and difficult to read in their entirety. In the interest of enlightenment and providing you the opportunity to draw your own conclusions about the thoughts and intentions of our forefathers when America was born, I will be posting excerpts of many famous speeches of our Founding Fathers broken down into smaller parts. We believe that by breaking up the speech, we can better digest and understand the powerful words within them.

The first Part of our first president’s farewell address, (President George Washington) in 1789 is below. Click to see the more parts of his Farewell Address. Other parts will be added in the next few days. Note: To ensure you see all – register for our free newsletter at the bottom of this page and it will be emailed to you daily.

Excerpt – Part I of the Farewell Address of George Washington

The period for a new election of a citizen to administer the executive government of the United States, being not far distant, and the time actually arrived when your thoughts must be employed in designating the person who is to be clothed with that important trust, it appears to me proper, especially as it may conduce to a more distinct expression of the public voice, that I should now apprize (sic) you of the resolution I have formed, to decline being considered among the number of those out of whom the choice is to be made. 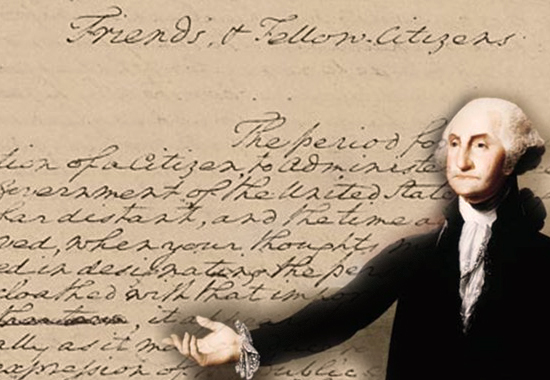 I beg you at the same time to do me the justice to be assured, that this resolution has not been taken, without a strict regard to all the considerations appertaining to the relation which binds a dutiful citizen to his country; and that in withdrawing the tender of service, which silence in’ my situation might imply, I am influenced by no diminution of zeal for your future interest; no deficiency of grateful respect for your past kindness; but am supported by a full conviction, that the step is compatible with both.

The acceptance of, and continuance hitherto in, the office to which your suffrages (sic) have twice called me, have been an (sic) uniform sacrifice of inclination to the opinion of duty, and to a deference for what appeared to be your desire. I constantly hoped that it would have been much earlier in my power, consistently with motives which I was not at liberty to disregard, to return to that retirement from which I had been reluctantly drawn. 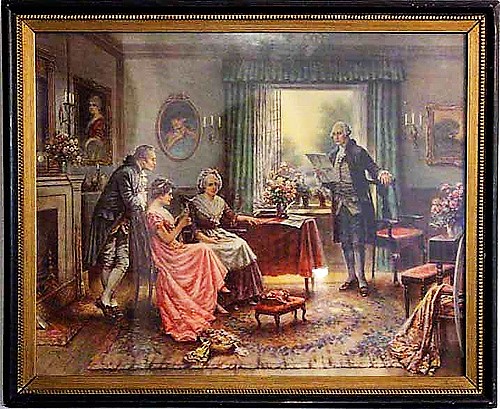 The strength of my inclination to do this, previous to the last election, had even led to the preparation of an address to declare it to you; but mature reflection on the then perplexed and critical posture of our affairs with foreign nations, and the unanimous advice of persons entitled to my confidence, impelled me to abandon the idea. I rejoice that the state of your concerns, external as well as internal, no longer renders the pursuit of inclination incompatible, with the sentiment of duty or propriety; and am persuaded, whatever partiality may be retained for my services, that in the present circumstances of our country, you will not disapprove of my determination to retire.

The impressions with which I first undertook the arduous trust, were explained on the proper occasion. In the discharge of this trust I will only say that I have, with good intentions, contributed towards the organization and administration of the government, the best exertions of which a very fallible judgment was capable. Not unconscious, in the outset, of the inferiority of my qualifications, experience in my own eyes, perhaps still more in the eyes of others, has strengthened the motives to diffidence of myself; and every day the increasing weight of years admonishes me more and more, that the shade of retirement is as necessary to me as it will be welcome. Satisfied that if any circumstances have given peculiar value to my services, they were temporary, I have the consolation to believe, that while choice and prudence invite me to quit the political scene, patriotism does not forbid it.

Debt of gratitude to my beloved country

In looking forward to the moment which is to terminate the career of my political life, my feelings do not permit me to suspend the deep acknowledgment of that debt of gratitude which I owe to my beloved country, for the many honors it has conferred upon me; still more for the steadfast confidence with which it has supported me; and for the opportunities I have thence enjoyed of manifesting my inviolable attachment, by services faithful and persevering, though in usefulness unequal to my zeal. If benefits have resulted to our country from these services, let it always be remembered to your praise, and as an instructive example in our annals, that under circumstances in which the passions, agitated in every direction, were liable to mislead— amidst appearances sometimes dubious—vicissitudes of fortune often discouraging—in situations in which not unfrequently (sic) want of success has countenanced the spirit of criticism—the constancy of your support was the essential prop of the efforts and a guarantee of the plans by which they were effected.

Union and brotherly affection may be perpetual

Profoundly penetrated with this idea, I shall carry it with me to my grave, as a strong incitement to unceasing wishes, that Heaven may continue to you the choicest tokens of its beneficence—that your union and brotherly affection may be perpetual—that the free constitution which is the work of your hands, may be sacredly maintained— that its administration in every department may be stamped with wisdom and virtue—that, in fine, the happiness of the people of these States, under the auspices of liberty, may be made complete, by so careful a preservation and so prudent a use of this blessing, as will acquire to them the glory of recommending it to the applause, the affection, and the adoption, of every nation which is yet a stranger to it.

Faith and Courage: 2nd edition -A Novel of Colonial America  Inspired by real people and actual events, the family saga of colonial America continues with Ambrose Dixon’s family. Faith and Courage presents the religious persecution of Quakers in Pre-Revolutionary War days of America intertwined with a love story.

DYK: This is how to “Save Face”
President Washington farewell – stated that citizens by birth or choice have rights
Don't miss the stories, get a daily dose of history