These considerations speak a persuasive language to every reflecting and virtuous mind, and exhibit the continuance of the union as a primary object of patriotic desire. Is there a doubt whether a common government can embrace so large a sphere? Let experience solve it. To listen to mere speculation in such a case were criminal. We are authorized to hope that a proper organization of the whole, with the auxiliary agency of governments for the respective subdivisions, will afford a happy issue to the experiment. It is well worth a fair and full experiment.

With such powerful and obvious motives to union, affecting all parts of our country, while experience shall not have demonstrated its impracticability, there will always be reason to distrust the patriotism of those who, in any quarter, may endeavor to weaken its bands.

One of the expedients of party to acquire influence, within particular districts, is to misrepresent the opinions and aims of other districts

In contemplating the causes which may disturb our union, it occurs as matter of serious concern, that any ground should have been furnished for characterizing parties by geographical discriminations (sic)—Northern and Southern—Atlantic and Western: whence designing men may endeavor to excite a belief that there is a real difference of local interests and views.

One of the expedients of party to acquire influence, within particular districts, is to misrepresent the opinions and aims of other districts. You cannot shield yourselves too much against the jealousies and heart-burnings which spring from these misrepresentations: they tend to render alien to each other those who ought to be bound together by fraternal affection.

A government for the whole is indispensable

The inhabitants of our western country have lately had a useful lesson on this head. They have seen, in the negociation (sic) by the executive, and in the unanimous ratification by the senate, of the treaty with Spain, and in the universal satisfaction at that event throughout the United States, a decisive proof how unfounded were the suspicions propagated among them of a policy in the general government, and in the Atlantic states, unfriendly to their interests in regard to the Mississippi. They have been witnesses to the formation of two treaties, that with Great Britain and that with Spain, which secure to them everything they could desire, in respect to our foreign relations, towards confirming their prosperity. Will it not be their wisdom to rely for the preservation of these advantages on the union by which they were procured? Will they not henceforth be deaf to those advisers, if such there are, who would sever them from their brethren, and connect them with aliens?

To the efficacy and permanency of your union, a government for the whole is indispensable. No alliances, however strict, between the parts can be an adequate substitute; they must inevitably experience the infractions and interruptions which all alliances in all times have experienced. Sensible of this momentous truth, you have improved upon your first essay, by the adoption of a constitution of government better calculated than your former, for an intimate union, and for the efficacious management of your common concerns.

Government adopted the distribution of powers

This government, the offspring of your own choice, uninfluenced and unawed; adopted upon full investigation and mature deliberation; completely free in its principles; in the distribution of its powers uniting security with energy, and containing within itself a provision for its own amendments, has a just claim to your confidence and your support. Respect for its authority, compliance with its laws, acquiescence in its measures, are duties enjoined by the fundamental maxims of true liberty.

The basis of our political systems is the right of the people to make and to alter their constitutions of government. But the constitution which at any time exists, until changed by an explicit and authentic act of the whole people, is sacredly obligatory upon all. The very idea of the power and the right of the people to establish a government, pre-supposes the duty of every individual to obey the established government.

However combinations or associations of the above description may now and then answer popular ends, they are likely, in the course of time and things, to become potent engines, by which cunning, ambitious, and unprincipled men, will be enabled to subvert the power of the people, and to usurp for themselves the reins of government; destroying afterwards the very engines which have lifted them to unjust dominion.

Towards the preservation of your government, and the permanency of your present happy state, it is requisite not only that you steadily discountenance irregular oppositions to its acknowledged authority, but also that you resist with care the spirit of innovation upon its principles, however specious the pretexts. 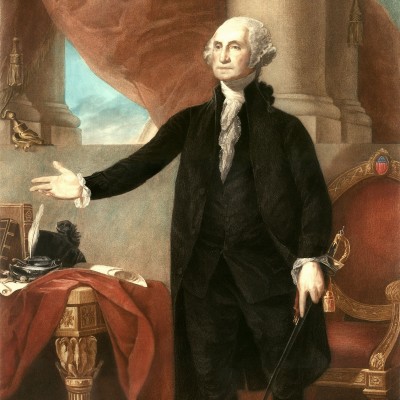 One method of assault may be to effect in the forms of the constitution, .alterations which will impair the energy of the system, and thus to undermine what cannot be directly overthrown. In all the changes to which you may be invited, remember that time and habit are at least as necessary to fix the true character of governments, as of other human institutions—that experience is the surest standard, by which to test the real tendency of the existing constitution of a country—that facility in changes upon the credit of a mere hypothesis and opinion, exposes to perpetual change, from the endless variety of hypothesis and opinion; and remember especially, that for the efficient management of your common interests, in a country so extensive as ours, a government of as much vigor as is consistent with the perfect security of liberty, is indispensable.

Liberty itself will find in such a government, with powers property distributed and adjusted, its surest guardian. It is, indeed, little else than a name, where the government is too feeble to withstand the enterprises of faction, to confine each member of the society within the limits prescribed by the laws, and to maintain all in the secure and tranquil enjoyment of the rights of person and property.