Where Have All the Chinaberry Trees Gone?

Seventy years ago the umbrella-shaped chinaberry tree was in almost every county yard. The tiny purplish spring blossoms with their faint sweet smell gave way to glossy green berries hidden in the darker green leaves. Those berries were ideally suited for pea shooters or for thumping toward unsuspecting victims. Boys honed their shooting skills while little girl strung the seeds for necklaces or bracelets.

Summer shade from one of the trees could shelter old men’s checker games or cool ladies who were shelling peas or snapping string beans. Before air conditioning, much use was made of outdoor shade especially in the yards swept clean with brush brooms. Farms had no grassy lawns around the house where snakes might hide. Brush brooms were made from 6 foot saplings tied together in a large rough bundle, and were as much like rakes as brooms. They could sweep out the pea hulls after the shelling was done, chase a chicken out of the forbidden inner yard, or gather dry leaves to burn under wash pots. Brush brooms were for outdoor use. 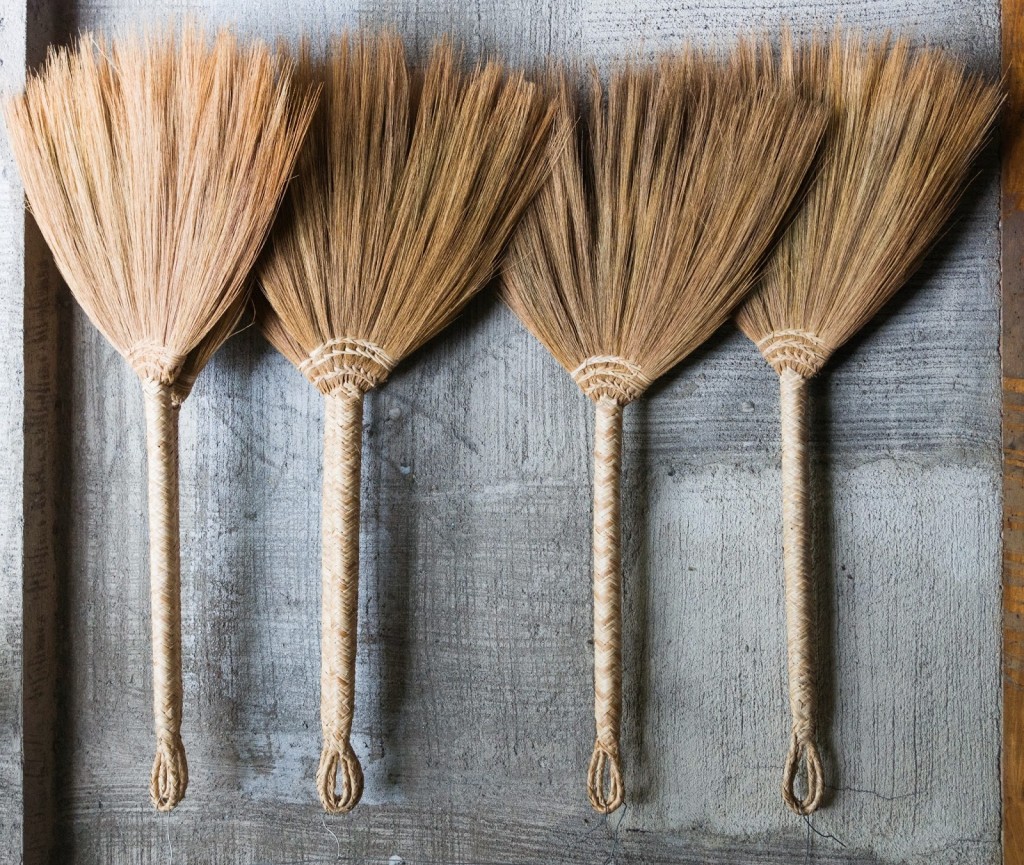 Few people had brooms with a stick handle

In the farmhouse, the housekeeper used the sedge brooms cut from sedge grass and tied in 3-inch bundles with the string that came off the daily newspaper. The string was tied around the bottom of the bundle, the stalks evened by bumping on the floor then wrapped diagonally halfway up the bundle and secured with a double wrap straight across. Several were made at once so that a year’s supply was available as the fragile brooms wore down quickly and were discarded to start fires in the fireplace. The sedge grew about 30 inches high with soft tops that could sweep dust or debris inside the house. Few families had brooms with a stick handle.

Farm families made their own cleaning supplies

Many farm families had to make their cleaning supplies since the small amount of cash from selling eggs and butter went for luxuries like coffee, sugar, and flour. Grease from frying was later strained, heated, and mixed with lye water from ashes to make lye soap for cleaning, washing clothes, bathing. Sometimes the combination was very strong and caustic but used in a black wash pot full of boiling water removed dirt and stains. Wash day was not a project for sissies and usually happened once a week unless gathering crops demanded all hands in the field.

My favorite chinaberry was at the southeast corner of Grandpa’s front porch. If no one was looking, a child could climb the tree and walk around on the high pitched roof of the house, a practice much frowned upon by the homeowner. From the rooftop, the sinner could see a swirling cloud of dust following a car coming two miles down the road and be the first to greet the mailman.

2 Responses to Remember sitting in the shade of a chinaberry tree, playing games, and shelling peas?

There was a total eclipse of the sun in 1699 which terrified the world
Summer in the 1950s was not always fun – Do you remember these fearful days?
Don't miss the stories, get a daily dose of history