I thought we should adopt a dog to complete our family. When I discovered a large black, male standard poodle for sale, I convinced Bob this was just what we needed, little knowing how wrong I would be.

He delineated his territory

When Bob brought him home and introduced him to the fenced-in backyard we all stood Pepe performed his dog duties. Sniffing every bush in the backyard thoroughly, carefully, as if each one held the secret to the meaning of life, he then proceeded to cover a particular twig or leaf with his own mark, delineating his territory and adding to the complex bouquet for the next animal to decipher. A job Pepe performed with his heart and soul.

Hearing the soft pad of his paws as he leapt in the air in sheer happiness, he jumped up on Keith and began slobbering love all over him while they rolled over together on the grass. They raced and tumbled and laughed, stopping now and then to lie down, Keith on his back and Pepe on his stomach, both panting and nuzzling each other.

Pepe needed a lot of discipline

Unfortunately, we discovered very early that Pepe was strong, demanding, willful, headstrong, smarter than hell, irksome, annoying, exasperating, infuriating, and needed lots of discipline. In short a standard poodle out of control which we might have succeeded in curbing had we adopted him as a puppy. Regrettably, Pepe was an escape artist and it was here that Pepe developed a lifelong love for large box turtles.

Whenever Pepe was able to escape, he loved to bring the turtles into our yard and torment them with bared teeth and a growl bigger than the dog himself as we raced to rescue the poor thing. He was constantly on the move and with his love for comedy; every time he escaped he would terrorize every cat in the neighborhood. The poor neighbor’s cat spent half her time up a pine tree in their front yard. The neighbor kept trying to run over him with his car every time Pepe dug out. Since our neighbors had no sense of humor for his escapades, Bob decided to take Pepe to dog training school. As they departed in his MG with the top down, Pepe sat on his haunches, closed his eyes and let the wind flap his ears around as everyone they passed gave a double take to see this huge dog sitting up twice as tall as Bob in the front seat of the small car. Bob enrolled him in dog training school twice, but everything he tried to get Pepe to perform, from sitting to heeling to staying, was a battle of wills between them – Pepe’s only thoughts were for the cute little female dogs in class – definitely a school dropout 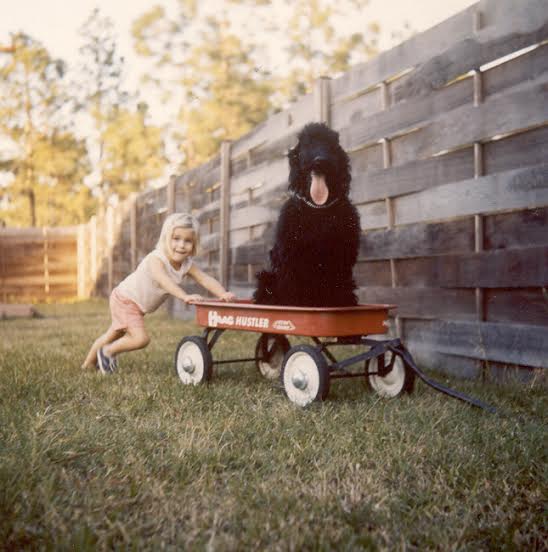 Pepe, beside himself with joy fell in love with the beautiful purebred dog down the street with the fine collie nose, the perfect ears, the small brown eyes and flaxen hair. After she became pregnant and had 12 little black puppies with long, straight hair, the owners of the pure bred collie wanted to put Drano in Pepe’s food. At that point, we decided the only way our neighbors would speak to us was to tie Pepe inside the fenced in yard to a huge doghouse. One day as I returned home from the store, I saw Pepe covered in dirt only his stub of a tail protruding, digging an enormous hole in the earth as he disappeared under the fence.

He was attempting to dig a hole large enough to take him and his doghouse out into the world. I immediately called my cousins who lived on a farm in Georgia and told them I would be willing to give them a beautiful registered poodle if they would accept him. Of course, not knowing what they were agreeing to, they accepted him gladly. Our neighbors were overjoyed to hear Pepe was moving at least 500 miles away.