In the 70’s, after we moved from central Florida to a small rental house in the southern part of the state, we realized the cost of living in south Florida was much higher. In order for us to eventually purchase a new home, Bob and I agreed I needed to find a job. However, since I was a stay at home mom, I hadn’t worked for the past ten years.  One evening after dinner, my husband and I discussed this dilemma.

“Maybe you could find work in a local hospital and take advantage of your expertise in microbiology,” Bob suggested.

“That’s an option, I suppose. I did notice a small hospital only a few blocks from us. I would be surprised if they have a microbiology department. However, the lab might be small enough so most of the routine tests are performed by hand. Since I’ve had no experience in instrumentation, I think I’ll check it out.”

The following day, I walked over to the hospital as a flutter of butterflies nested in my stomach. When I entered the laboratory, the clattering of conversation died abruptly and every head turned to look at me.  At one end of the room an enormously fat man wearing a huge laboratory coat sat at a desk, torturing a paper clip into grotesque shapes as he stared at me. A chunky little woman sat close to the door on a stool in front of a littered table.  She greeted me with something between a sneer and a scowl as she swiveled the stool to face me.  She began shaking her head slightly as she declared with a certain satisfaction, “We’re not hiring.”

“Could I just leave my resume along with a note for the laboratory director?” I inquired.

She took the papers from me cautiously, as though they were soaked in urine and dropped them on the table.  “I’ll put it with the others,” she grunted.

Unexpectedly, the man at the desk tossed the paper clip into the wastebasket and heaved himself out of his chair. He lumbered over and picked up my resume as I stood watching him.   “Is this yours?” he asked, glancing at the woman as if to say, “How did she get in here?”

The woman started to say something but I quickly spoke up, stepping over her words.

“Yes sir, I’m applying for a position as a laboratory technician and microbiologist.”

He gave a double take as he stared at me, “Tell me about your training in microbiology.”

After describing my education and experience, I hastened to add I had not worked in a laboratory for more than ten years.

“Humm,” he said studying the paper in his hand. “I handle microbiology now, but I’d like to have someone take it over, if you’re willing. You realize we can’t pay you very much since this is a small hospital. Can you identify bacteria and determine sensitivity to antibiotics?”

“Follow me.” I stood back and watched him set up a microscope, switch on the illuminator and position a slide on its platform. He asked me to look. I leaned over and peered into the eyepieces, taking my eyes a moment to adjust.  Almost immediately, I determined the field under the ‘scope was filled with reddish-stained gram negative bacteria.

“Can you tell me what these bacteria are?” he questioned me.

“No, of course not,” I responded.  “I would need to re-plate them on specialized agar in order to classify them.”

“You mean you can’t identify the bacteria by smelling the culture?” he smirked.

Amazingly, I realized he was serious.  Apparently, his nose had been the only factor in categorizing the organisms for the doctors.

That evening I discussed this conversation with my husband. “Bob, if George gives me permission, I will have to completely change the procedures in the micro lab.  You won’t believe this, but at the present time he performs the tests by staining the organisms and then smelling the cultures to identify them, and his sensitivity tests are appalling.  He just swabs an agar plate with a clump of bacteria; then throws on a handful of antibiotic discs to see if the microorganisms are inhibited around them. As a matter of fact, when I mentioned that I would need to prepare special agar media before performing these tests, he had no idea what I was talking about. Can you imagine? I am appalled at how antiquated the lab is. God only knows how many patients have suffered from George’s nose.” 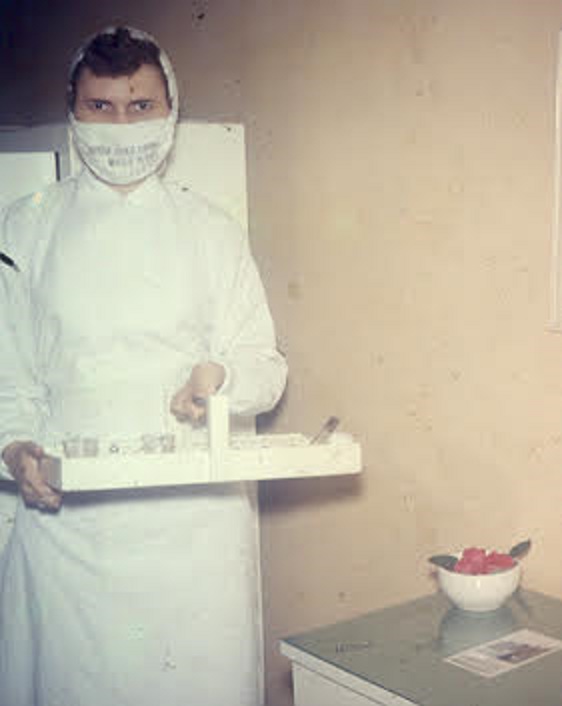 The following evening, after my first day at the hospital, Bob and I discussed the other horrifying events that had occurred in the laboratory.

“When one of the procedures is performed, it’s necessary to use ethyl ether as a reagent.  I noticed today as one of the technicians performed the test, he insisted on leaving the bottle on the lab bench all day, even though I made it a point to put it back in the refrigerator when I saw it out.”

“Good for you! Ether is very volatile and highly explosive. It certainly needs to be kept cold,” Bob responded.

“Yes, well if that weren’t bad enough, after lunch when I returned to the lab, he had his lighted cigarette sitting beside the ether bottle. He was also using his mouth on the pipette instead of a bulb to draw up concentrated sulfuric acid.  I know I’m overly sensitive to unsafe practices since I once worked at DuPont, but some of his actions are frightening.”

“Chris, you need to talk to George immediately about this. That technician is endangering everyone in the lab, not to mention the entire hospital.”

“I realize this, Bob. However, when I approached George with my concerns today, he was assisting me by plating bacterial cultures with a cigarette in his mouth and an open sandwich sitting beside him. While I watched, he gathered up all of the contaminated bacteria plates and threw them in the trash without decontaminating them first.”

“I think you should let George know if something isn’t done right away, you will hand in your resignation. I think he will listen to you since I’m sure he hired you for your knowledge of microbiology.”

All right, Bob. Before I start work tomorrow, I’ll make it a point to talk to both George and his wife. I feel if she doesn’t buy into my ideas, I might as well resign. She’s the real “director” of the lab.

The following evening after dinner when the children were in bed, Bob said, “Tell me about your meeting this morning with George and his wife.”

I smiled as I said, “I explained to both of them if they wanted me to sign off on the sensitivity testing of bacteria, I would need to have the necessary media and controls.  I would also need specialized media for identifying the bacteria.”

“What did they say to that?” Bob asked.

“Well, right away his wife spoke up and said she had priced the media for identifying bacteria and it was too expensive for their budget. I immediately turned to George and explained to him I would be willing to prepare my own media, but I would have to have time allotted for it.  I told him I needed to have a workstation designated as Microbiology with the necessary biohazard labels posted since blood, sputum and stool cultures can be unsafe.

“What did his wife say to that?” Bob asked, a smile touching the corners of his mouth.

“She stared at me sullenly, and then huffed loudly as George agreed to all of my conditions.”

Bob laughed, “You know how to defeat a person softly, don’t you?”