For several years our dug well had not provided enough water for our family needs. It had an electric pump and a pressure tank. Two baths and the well was dry.

A drilling company was called in and bored a two hundred foot well. The drilled well provided plenty of water, but the water was red with dissolved iron. Our white clothes were rusty after washing with this water. A filter mineral had to be installed and we had clear water. The system had to be back washed once a week. The filter mineral had to be replaced on a monthly basis.

A neighbor gave Dad an idea and he built another filter system. The object was a concrete septic tank, sitting at ground level that had never been used. It was a filled with water until the tank cracked and the water ran out. 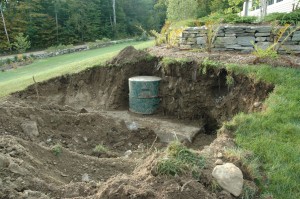 It was not designed to sit unsupported. Dad built forms and poured the concrete to reinforce the tank. He connected the water pipe from the drilled well to the septic tank and he had a filter water system to provide water to wash our clothes.

My family now lives in the house on the property. The filter system worked until the city water reached us. The tank sits in the back yard. I tried, but it is immune to demolition, including 30-40 rifle fire. I suppose it will remain as a monument to my dad. He built one that worked!

Football was banned in Iowa in 1918

Circleville Ohio – These vintage photographs of people on the street from 1938 take you back in time
Amazing vintage close-up photographs of the faces of the Great Depression
Don't miss the stories, get a daily dose of history