Remember when the stories and poems in children’s school books concluded with a message of preferred behavior?

I hold in my hand my fourth grade reader, copyright 1925.  Among my old books there is also a much worn copy of Grimm’s Fairy Tales 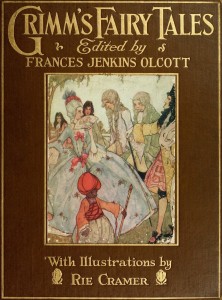 Literary history tells us that Hans Christian Anderson and his brother left law school and spent weeks walking the German countryside in search of old stories which had been told only by word of mouth.  They sat in kitchens and gardens listening to old grandmothers tell stories that their grandmothers had told them.  Perhaps the most famous of this group is “The Emperor’s New Clothes

, “ which tells the story of a proud Emperor to whom fine clothes meant everything.

Today we would say that two scam artists came to him promising to weave fine garments of solid gold threads.  When the Emperor “wore” the garment they supposedly had created, it took the honesty of a small child to gasp and say “But he hasn’t got anything on!”

Then there is the fairy tale of Three Little Pigs .  One built a house of straw; anther built of sticks, and the wolf huffed and puffed and blew these houses down.  The third little pig was wise and built his house of brick. 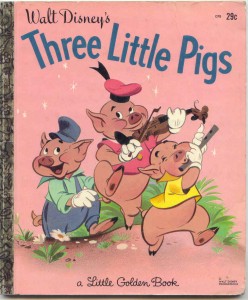 Most of these stories began with “Once upon a time” or “Long, long ago.”  Remember the story of “The Ugly Duckling

” who grew to be a beautiful, graceful swan?  Remember “Little Red Riding Hood

” who’d been told never to talk to strangers? Even the story of lovely  Cinderella

as contrasted with her wicked step-sisters had a moral to be learned.

My second grade teacher, teaching about honesty, taught us to sing about George Washington as a little boy.  We sang to the tune of “Jesus Loves Me” the following little rhyme.

Once a father very sad

Thought his little boy was bad.

Took the lad upon his knee,

“Son, did you cut my cherry tree?”

However the story in my fourth grade reader that made a lasting impression on me was “Dust under the Rug.”  There was a sick mother whose little girl went searching for work to get money before their food gave out. Finding a tiny house in the forest, she went in and cleaned it thoroughly.  The owners of the house were 12 tiny dwarfs, who asked her to clean for them every day.  One day she was slow with her cleaning and  made the decision not to sweep under the rug where no one could see. 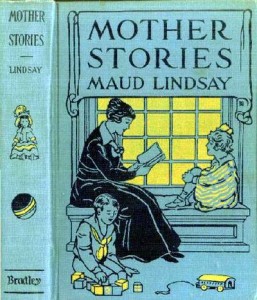 When she went to bed that night and tried to go to sleep, it seemed a little voice in her heart was saying “Dust under the rug!”, “Dust under the rug!”  She could bear it no longer so she sprang out of bed, grabbed the broom and swept away the dust under the rug at the little house.  Lo, under the dust lay 12 shining gold pieces as round and bright as the moon!  The 12 little dwarfs came into the room and speaking in rhyme, as they always did, said:

Our love goes with the gold we give.
And oh! forget not while you live
That in the smallest duty done
Lies wealth of Joy for everyone.

And so here I am 75 years later still turning my door mats and sweeping beneath them thoroughly. Although I have never found 12 gold pieces, there’s a certain satisfaction in a job well done.