Silhouettes have been used as a means of representing images of leaders for thousands of years as evidenced by coins bearing the likenesses of their rulers. In the Bible Jesus responded to those Jewish leaders trying to trap him by asking if the Jews should pay taxes. His response was to request a coin, point out the image, and say “render unto Caesar the things that are Caesar’s and to God the things that are of God”.

Ancient as the art is, it reached its height in the 18th and 19th century for those who wished to record family images and could not afford a painted portrait. The name came from the French treasurer before the French Revolution who suggested to the rulers that having silhouettes cut would be much cheaper that having portraits painted. 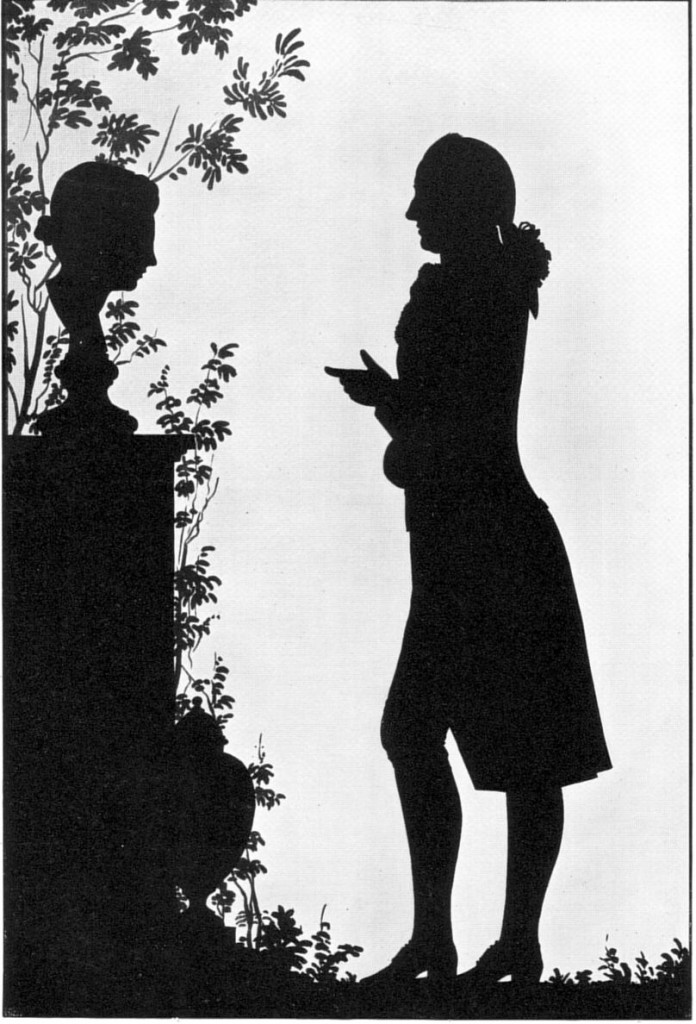 A portrait silhouette can be made by having the subject’s shadow projected on a surface and lines drawn around the image. Elementary schools often do this for learning activities to be given as gifts for the students’ families. Sometimes shadows projected on a screen are used in plays or movies for a greater visual impact. The movie E. T. was advertised by the image of the boy on a bicycle silhouetted against a full moon.

When I first began to teach few precut or manufactured bulletin materials were either available or affordable for Alabama schools. Teachers cut out letters, numbers, and shapes to illustrate subject matter. When we needed silhouettes of George Washington and Abraham Lincoln I noticed the the shapes were not much harder to reproduce than the shape of a leaf or an outline of a state. Using a penny I cut Abraham Lincoln to fit an 8 by 10 inch frame. Washington was even easier. 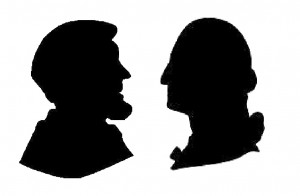 Soon I was cutting shadow portraits for my students and their families. Craft shows contacted me to do silhouettes for school fundraisers and charities. Usually a freehand cutting took about 1 minute and could easily be redone if the client was not satisfied with it. Sometimes silhouettes brought in $500 a year for charities. I did not price or handle the money myself; it went directly to the organization so I would not have to pay tax on it. If I have to shift sides of the brain to make change, I lose the ability to look at the subject and cut the shape of the head in a single fluid movement. The Image may look stilted or forced. 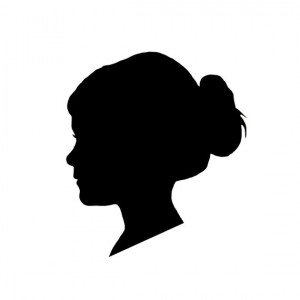 Each silhouette is cut freehand and glued on a lighter piece of paper. Occasionally the sponsoring group will choose colors other than black and white and sometimes more than one image is used in the finished product. The purest form of the art uses heavyweight black paper or cardstock, a sharp pair of scissors, a fairly still subject, and the artist’s eyes and hands. Sometimes the subject may not be very still, but a reasonable likeness can be made. No two are exactly the same and if multiple copies are desired they have to be cut at the same time. 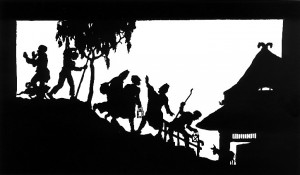 It is a delight when people tell me that their mothers still has portraits I cut of them 35 years ago. I have done 5 generations, but prefer doing children’s silhouettes because most adults don’t like the extra lines Mother Nature has added. I still cut them for church festivals or family reunions, and sometimes for my grandchildren and great grandchildren I wish I’d saved the ones that I regularly cut of my children and displayed on the frig..