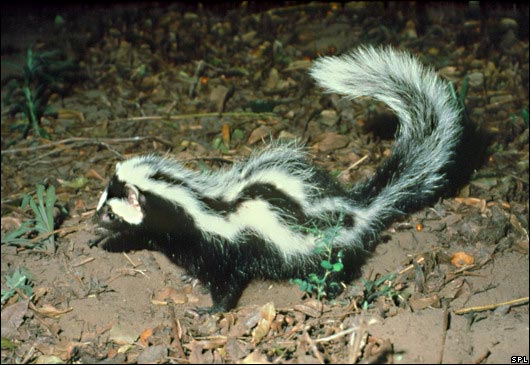 How could any animal be more beautiful than a skunk! Nature dictates that a “red flag” come up whenever you see one. I recently saw the first skunk I had seen in many years. That experience brought back some memories of long ago.

For some reason skunks were attracted to the acreage of my husband’s parents. Whenever we would go for a visit, we would often smell the unmistakable skunk odor. Skunks were always getting into their well-house and would have to be gently scared away. Once as we started up the steps, one of them had a large gunshot hole. My Father-in-law had fired his shotgun at a skunk and fortunately hit the step and not the cement floor. That could have ricocheted and caused some serious wounds.

Some teenage girls lived across the street from my In-laws. Our three sons usually went across to see them and catch up on what was going on in their lives. When Joe would stay a few days with his grandparents, he could go horseback riding with the friends. During a visit with the girls, our oldest son, Jay, was very embarrassed. One of the girls had commented about smelling a polecat. Jay informed her that Grandpaw had shot a skunk and that might be what she smelled!

Another time my husband took the boys hunting. By this time each of them had his own gun. As they were walking along, John aimed his gun at a four legger and said: “There is a skunk–or is it a kitty? It’s a skunk, BANG!” John actually hit the skunk and my husband yelled for everybody to run! Later as they came back by that spot, those guys were sure glad they had moved out in a hurry. I believe the skunk was the only life taken that day. Perhaps all the other animals had moved out in a hurry too.