“My husband patched ’em up loose on purpose,” said Mrs. Riddle, “so if we move he can pull down his boards and take ’em with him.”

“Don’t the owners keep up the property?” I asked.

“Nought but the big house,” she replied. 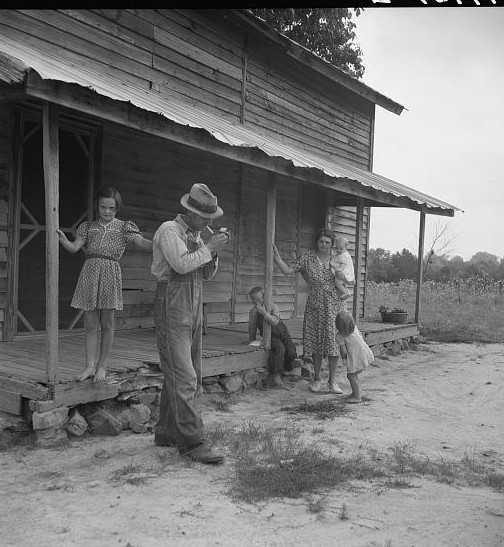 At the top of a ragged hill grown over with scrubby oaks stands a dingy, four-room cabin. The two rooms of which it consisted originally had been painted green, but except for a few streaks here and there the paint has long since rubbed off. 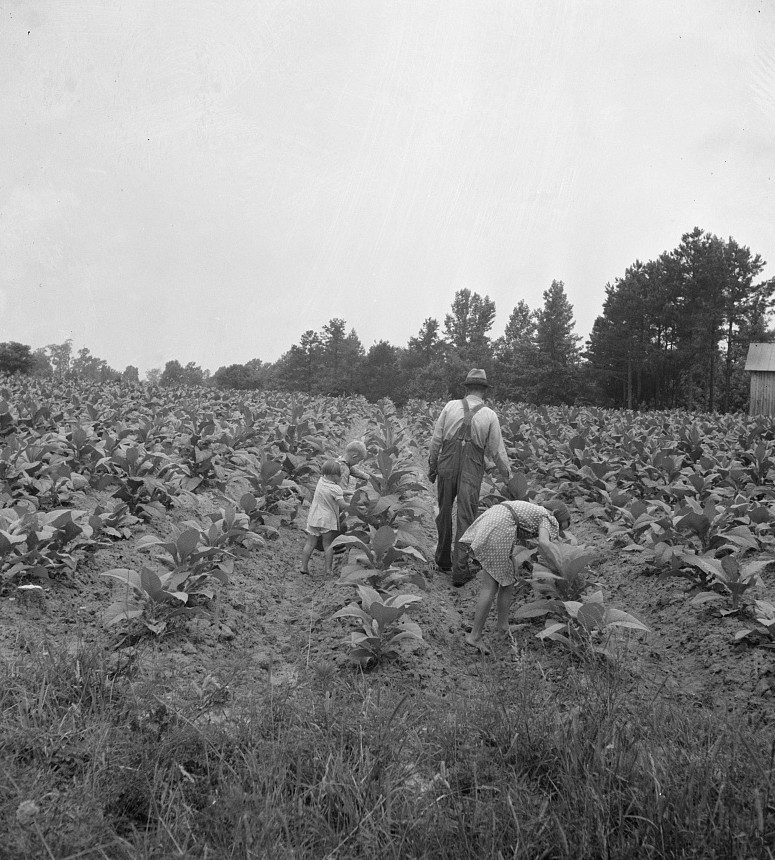 A lean-to of rough boards has been added. Freight and passenger trains chug along the tracks beyond the country road leading from the village, and cough up smoke from their toiling engines. The smoke caught by the wind swirls over the hill and still further blackens the cabin and outhouses.

It has no modern conveniences

Although pleasant, green fields rimmed by distant mountains partially encircle the hill, this house near the railroad tracks is as unprepossessing as the shacks in the meanest mill village. It has no modern conveniences. Stoves heat it, and it is lighted by kerosene lamps. Water is secured from a well adjacent to the pig sty in the middle of the barnyard. 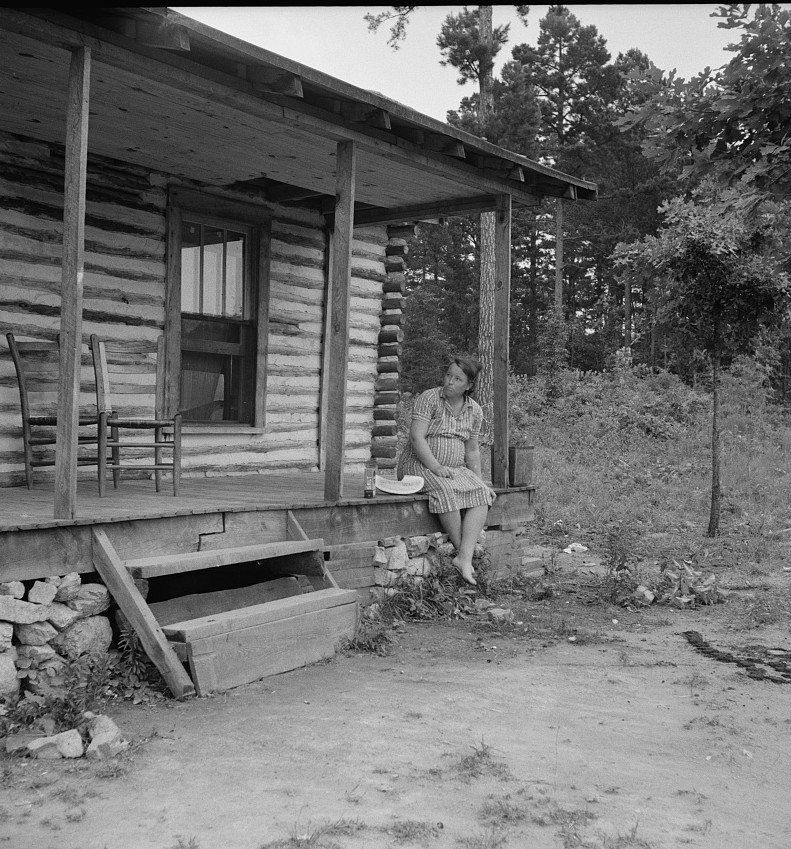 No attempt has been made to grade the yard, and the only evidence of care is a gravel walk outlined by bricks set edgewise, which leads from the front porch to the brink of the hill, where it stops short. 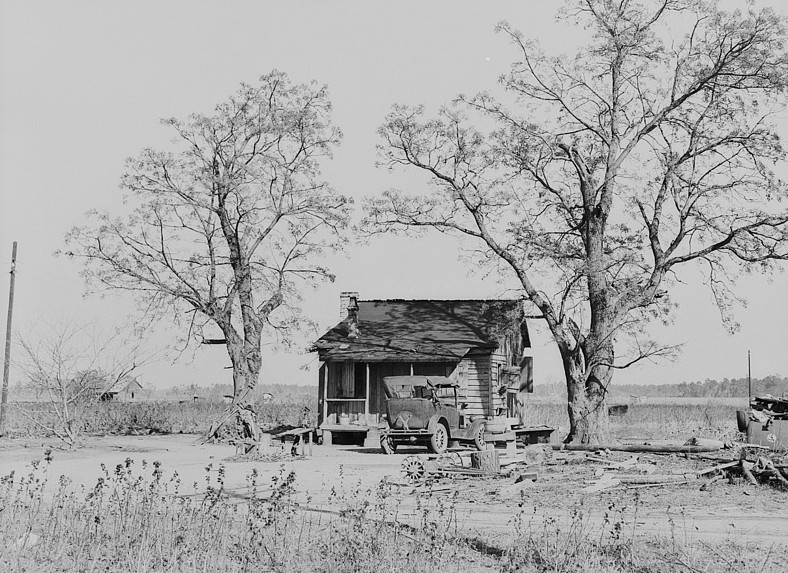 At the back of the house is an irregular clearing, muddy in wet weather, dusty in dry, and cluttered with small stones. Here stand the barn, stables, and corncrib, patched loosely with rough boards. They have never been painted. 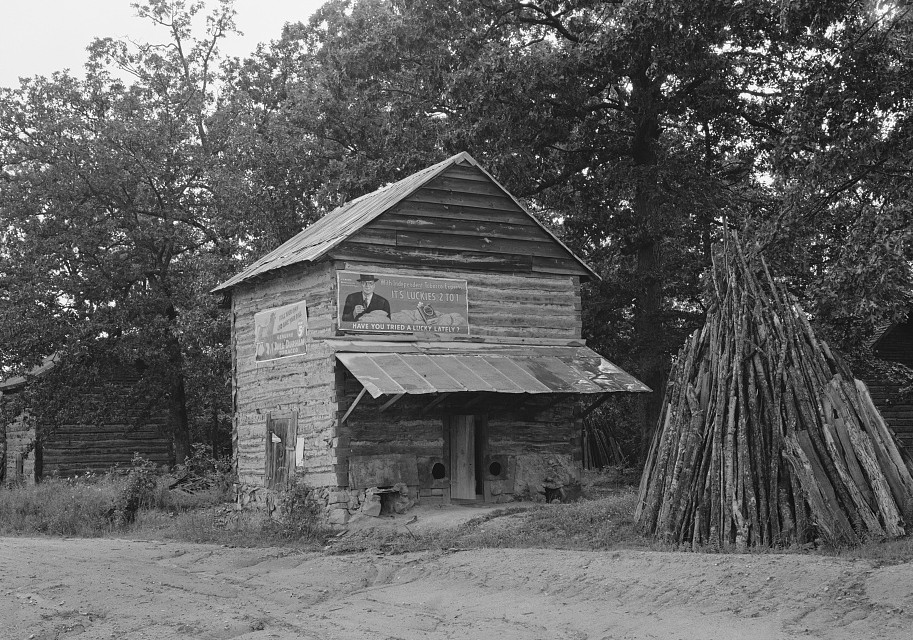 At first view from the rocky, deeply rutted road the place seemed abandoned, except that a brood of baby chicks, on hearing footsteps, rushed out from under the house, climbed all over the porch, and narrowly escaped being stepped on. The rough cornfield to one side of the cabin still has last year’s stalks standing at the end of March. 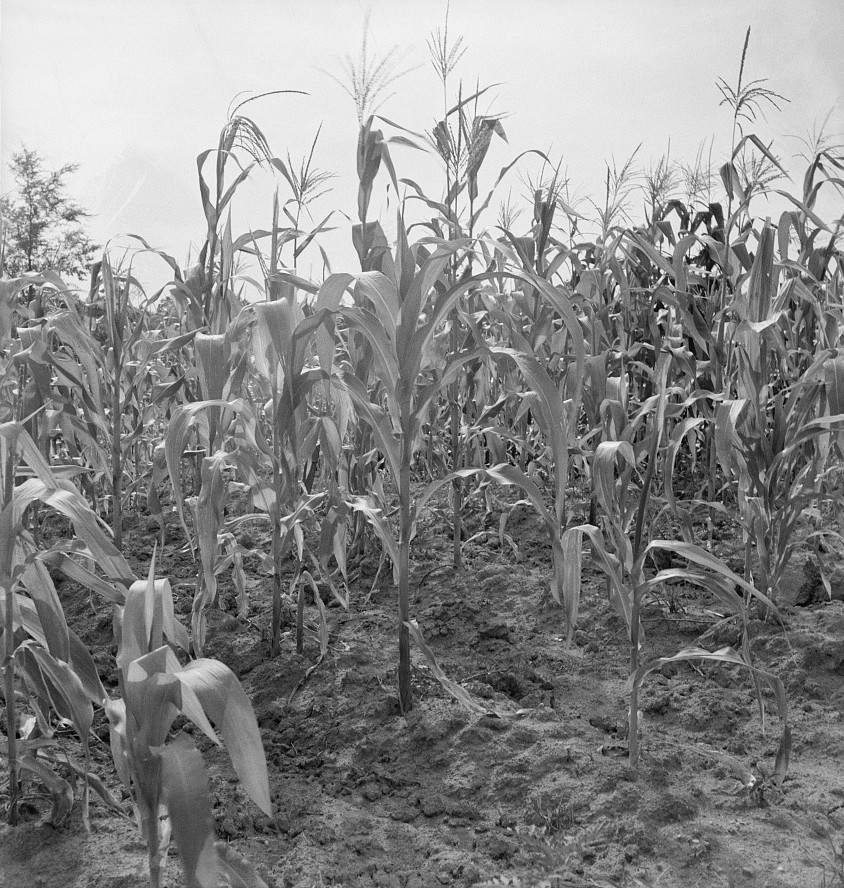 Summer Homes in the distance

On the opposite side of the hill, overlooking wide grain fields and distant mountains, is the red-roofed, many-gabled summer home of the Middletons, aristocratic coast dwellers, who rent part of their mountain estate to native farmers. 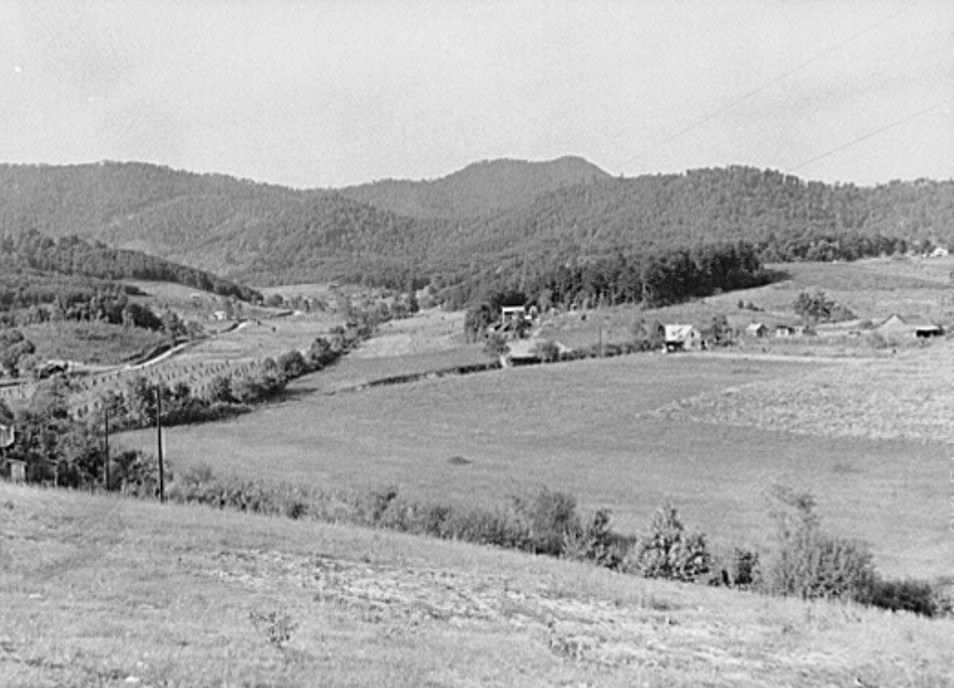 The Middleton homestead is approached by a neatly graveled road, outlined by trim shrubs. An intervening grove conceals from the summer occupants the tenant houses along the railroad track.

Jane Riddle, the tenant’s wife, is a brawny, masculine type, about 45 years old, with deeply tanned skin and roughhewn features. Her hair was entirely hidden by a cheap, red and green wool cap; her cotton dress was faded and shapeless; and, although there had been no rain for a week, she strode along in galoshes.

She was getting dinner. “My husband will be comin’ any time, now,” she said.

“What are you giving him for dinner?” I asked. 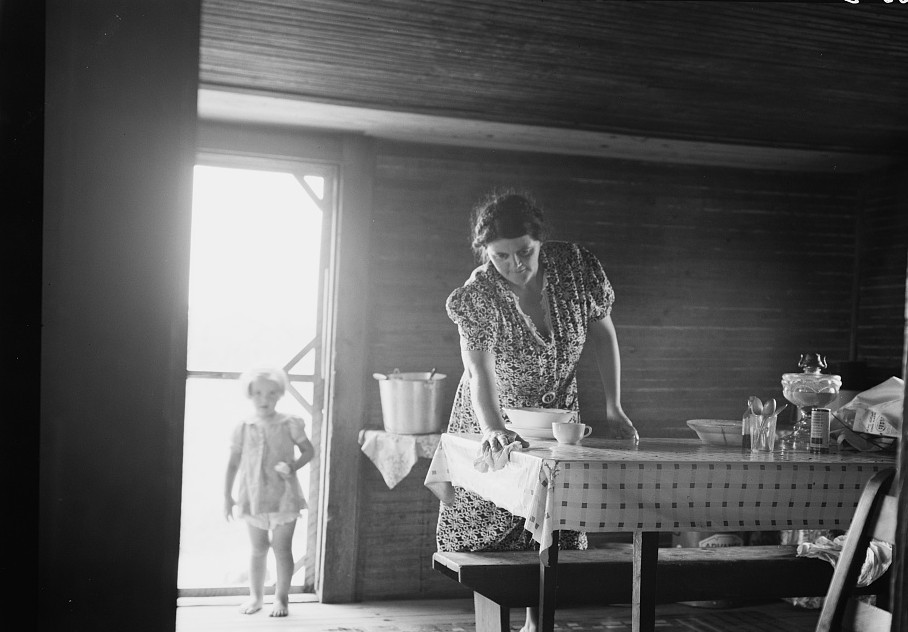 Peeled Irish potatoes in a yellow bowl an the long, zinc-covered table confirmed her statement. A range occupied one end of the kitchen. Rough shelves in the corners bore coarse earthenware dishes; a few pots and pans hung on the walls. The adjoining room, barely furnished, was evidently the living room. It had faded, large-flowered curtains at the windows, a coal heater, and a few cheap chairs. The walls were cluttered with a miscellaneous collection of fly-specked calendars.

“That’s a picture of my youngest son,” said Jane, pointing to a large photograph on a dresser in one corner. “He graduates from high school this year.” Later in the day when the boy came home from school, it appeared that the photograph flattered him. He was dark and thin, and stooped badly. He had a sullen, hangdog expression. Like his mother he was very closemouthed. 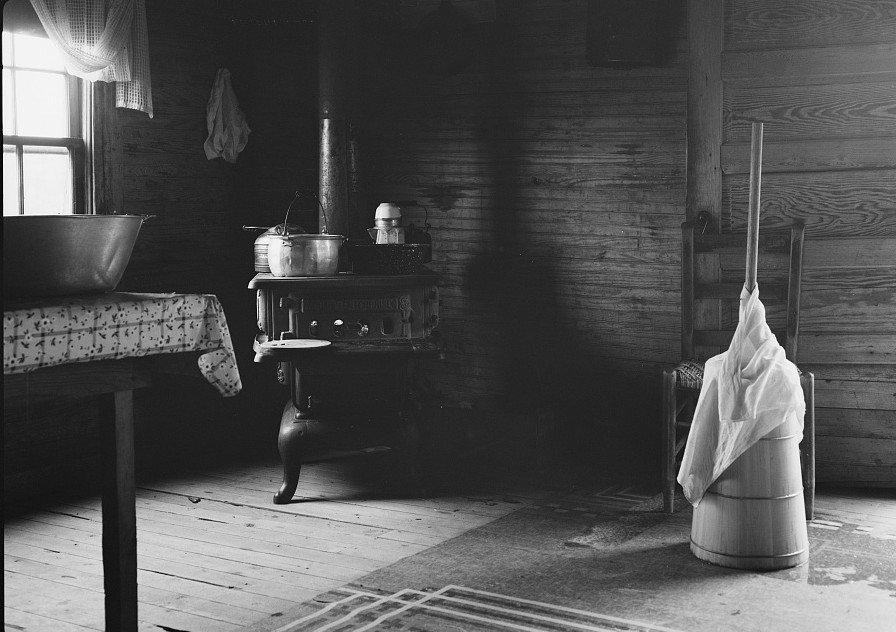 The older son, already graduated from high school, works in the weaving room of a rayon factory at $22 a week. He lives with his parents. The older daughter works in a hosiery mill and also lives at home.

Daughter’s work, hard on her eyes

“She inspects the work of 100 girls,” said her mother proudly, as she drew from a dresser drawer a cheap light-blue, rayon stocking. “This is one of the stockings they make at the mill,” she said. “My daughter inspects the feet, another worker inspects the legs, and another inspects the finished stockings when they are ready to be packed.” 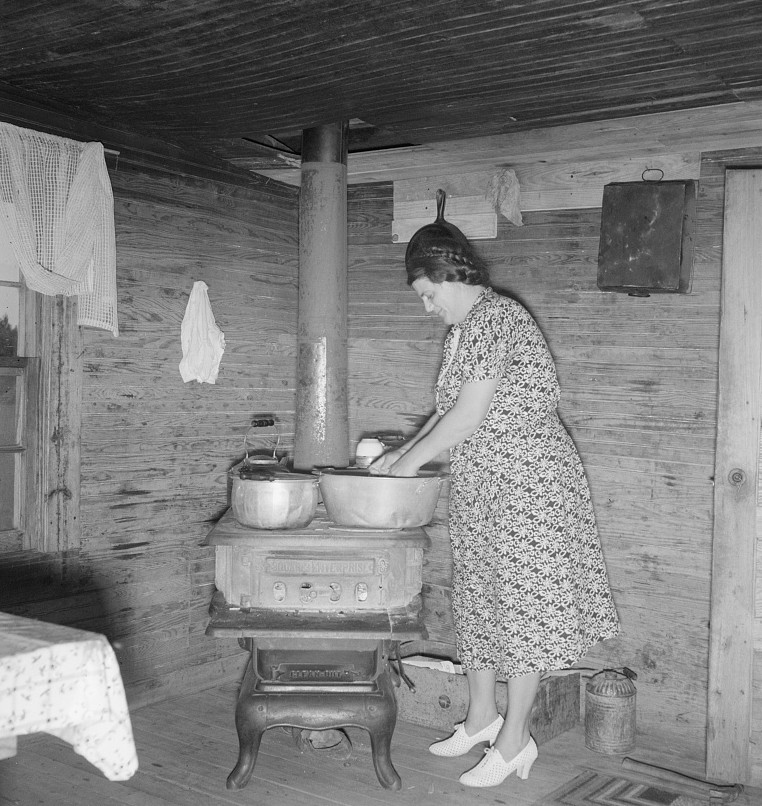 “How does your daughter like the work?” I asked.

“She likes it; but it’s hard on her eyes; she complains of them hurting her, when she comes home in the evening.”

The girl makes $12.60 a week. She is pale and anemic looking, and puffy about the eyes. Her expression is sullen, and she answers questions in a curt, monosyllabic style.

Neither she nor her younger brother seem to have shared their mother’s vigorous health. Although she has trouble with her eyes, she does not wear glasses.

A younger girl, still in grammar school shares the family reticence, but is more attractive, with dark, curling hair and serious eyes. A member of a 4-H club, she works on her project conscientiously. Last year she planted and tended a plot of beans.

The market was glutted

The vines bore abundantly, but although the crop was good the market was already glutted, so that she could sell none. This year she is raising a Hereford steer, a calf whose horns are still mere nubs. On her return from school she went directly to its stall, slipped a halter over its head, and led it out.

Her mother, who was haggling with a salesman over some insect powder, stopped to say, “Better water that calf; I forgot all about him. He ain’t had nothin’ to eat, or no water, neither.” It was then late afternoon.

The girl led the steer to the three stocks of fodder standing out in the clearing, tethered him, and let him munch from one of the stocks. Nearby was a harrow left in the open to take the weather.

Jane Riddle and the salesman continued their argument. The salesman, middle-aged, sandy-haired, and bland, was saying that Jane’s hens needed delousing.

There was no henhouse

“Give the powder a trial, ma’am,” he said. Jane went to the corncrib – it must have been a chicken coop, originally; it was built of slats and quite open enough to be soaked through by rain – and took out an ear of corn, and began scattering the grains.

At her call, some 80 hens came tumbling over each other. There seemed to be no henhouse, so they must roost in the trees, or in the stables, perhaps. They were a mixed brood: Plymouth Rocks, Rhode Island Reds, games, white Leghorns, and less easily recognizable species.

During the tobacco marketing season peddlers drive around to the tobacco barns and strip houses through the county to sell their wares to the farmers and tenants. Caswell County, North Carolina 1940 by Marion Post Wolcott 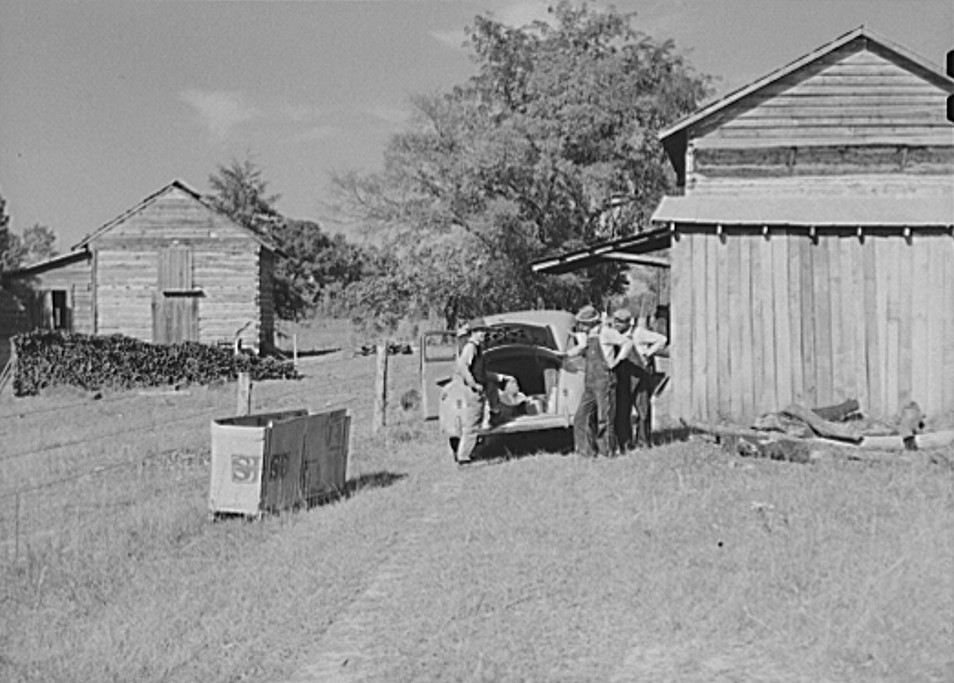 She ducked quickly and seized a big, squawking Plymouth Rock. The salesman rubbed the yellow insect powder into the hen’s feathers, shook it out into a box lid, and pointed to the lice that squirmed and then lay still. An argument followed.

“That there one,” said Jane Riddle, pointing a long, thick finger, “ain’t dead.”

The salesman smiled patiently and shook the box lid. Heads together, they watched intently.

The task of delousing 80 hens seemed to stagger Mrs. Riddle, particularly when the salesman declared the process should be repeated several times at intervals of three weeks.

“You could do it this way,” he argued, “just put the powder in the dust hole where the hens are accustomed to wallow. That will do as well.”

They haggled over the price

Then there began a haggling over the price. “A dollar and a half’s too much,” said the farm woman.

Mrs. Riddle brought out bathroom scales, which she balanced precariously on the uneven ground. Hen after hen was caught and deposited thereon, but refused to perch, until at last the salesman solved the problem.

He placed the hen’s head under its wing, rotated it vigorously, then placed the bewildered fowl on its side on the scales, while Mrs. Riddle and the younger girl squatted beside him to read the dial.

“Five pounds,” announced the salesman, as for a split second the hen lay still.

Hens were then fed and caught and rotated, until at last two hens were found whose combined weight totaled 11 pounds. A debate broke out afresh about the price per pound: Jane demanding 16¢, and the salesman contending for 12 1/2¢.

Finally the salesman won, and tucked a hen under each arm. He handed the container of insect powder to Jane.

The salesman waddled down the hill with his hens. He returned from his parked car with an unopened box of the powder for her.

Besides the chickens, Mrs. Riddle raises and sells vegetables, and keeps bees, but the real business of the family is raising beef cattle. Jim rents 120 acres from the Middletons and pays them a flat sum of $300 a year for the house and lot and the farm land. 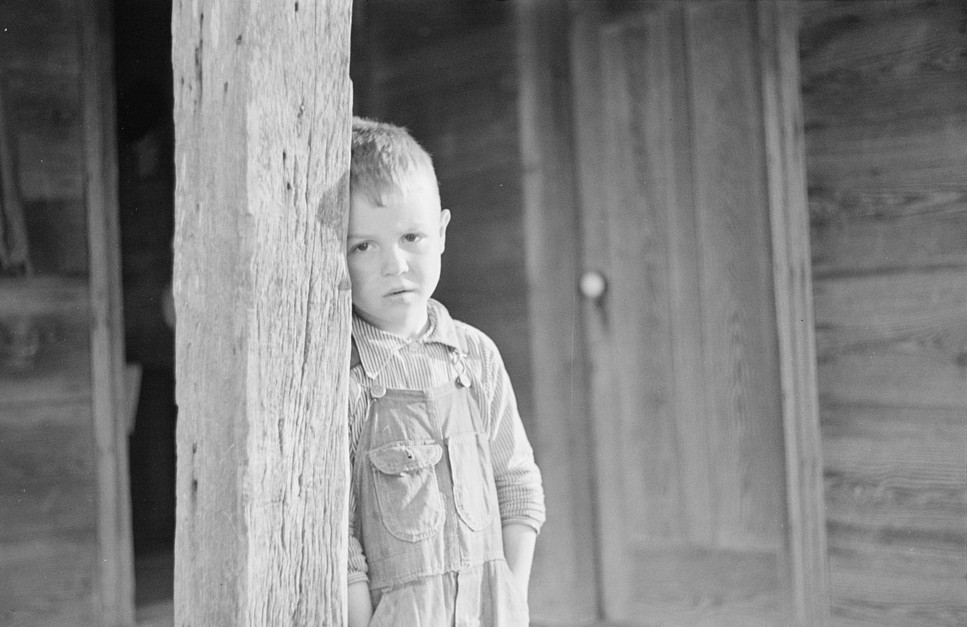 Jane seems to think this a profitable bargain and, while noncommital about gains, intimates they are prospering. They have 25 full-blooded Herefords, several full-blooded Jerseys, and other cattle of mixed breed. Those lying in the shade of the trees adjoining the lot looked rather gaunt. There were no stalls for them. Evidently they sleep in the grove.

All our folks was farmers

Part of the land is wooded, part is pasturage, and about half of it is arable bottom land, already green with springing grain. They also raise corn, peas, beans, and hay, and although Jim, 55 years old, is small and thin, and does not appear to have much strength, he can plow all day without excessive fatigue.

“All our folks was farmers,” said Mrs. Riddle, “back up in the mountains. No, I don’t know when they settled there, or where they come from. Jim’s people and my people lived in the same cove. I’ve known him all my life. His brothers and my brothers all farm. Most of ’em are back up there where we come from. I’ve got one married sister living in Fielding.”

“Did you and Jim go to school?” 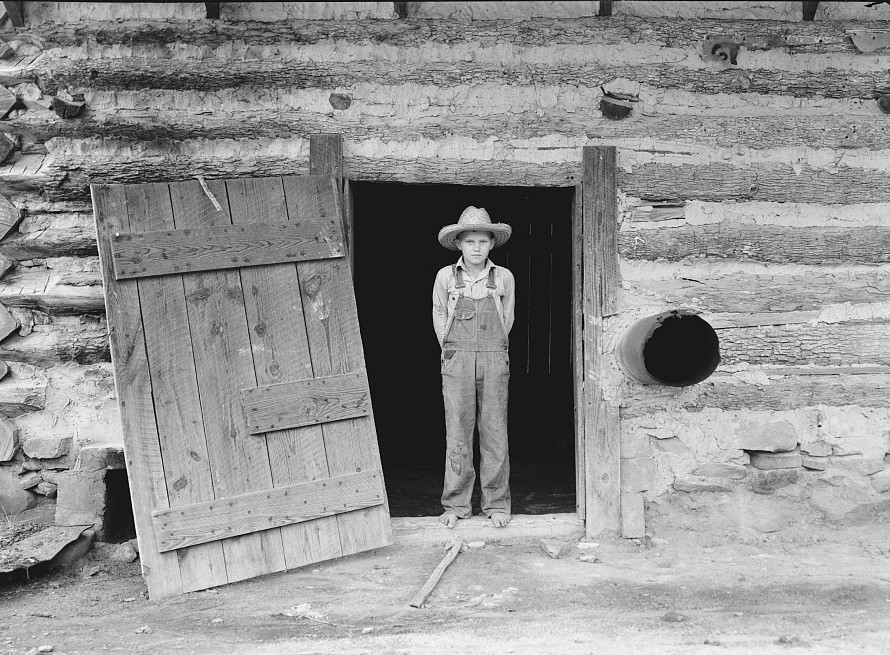 Jim owns 102 acres of land back in the mountains, but, “It’s so steep,” he said, “it ain’t fit for farmin’.” He raises apples on this land, and pastures cattle on the hillsides. He tried renting the place, “But the tenants,” Jane put in, “let the cows get into the orchard and break limbs offen the apple trees. They run down the property, so we just locked up the house and let it stand.”

“We’ve lived here about three year,” Jim added, “but we ain’t brought our best things here. We sort of feel like we’re camping out.”