As I sit here this cool evening I am wearing an old gray sweat shirt imprinted with the words “Old quilters never die, they just go to pieces.  “On my wall is a cross- stitched sampler which says “Blessed are the Quilters for they are the Piecemakers.”  In my childhood, quilts were a necessity in rural households that were heated by coal grates. We often slept under at least three quilts. 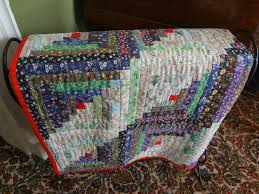 My mother had a “spare room” — one with no furniture in it.  In the fall, quilting frames were set up in this room and about six neighbors would bring their quilt tops, filler and lining and at least once a week they would gather for quilting and “socializing.”  Where else could they go? One of my special memories of the quilting gatherings is that of taking my dolls and crawling under the frames and the quilt where I played my imaginary games oblivious to the voices above me. There were no king and queen sized beds– only double and single.  As the women worked, they quilted as far as they could reach.  Then the sides of the frames were rolled under which moved the quilted part to the next unquilted area. 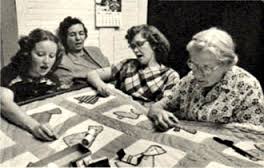 Hand-quilting is a very meticulous art and a devoted quilter is always seeking perfection.  A special strong quilting thread is used with a tiny, short, very sharp needle.  An expert boasts of just how many tiny stitches she can put onto that tiny needle.  In recent years machine quilting has become popular– and certainly this method takes less time. However if one is “stitching love” into an heirloom, it must be done by hand! 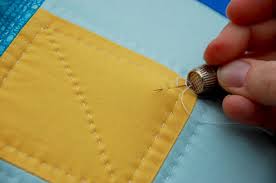 In my cedar chest is a Thelma Block quilt pieced of yellow, green, and white, and quilted by my mother.  It’s age makes it too fragile to display. My favorite is Grandmother’s Flower Garden pieced from the fabric of my little dresses that mother had made. (I never had a “bought” dress until high school days!) 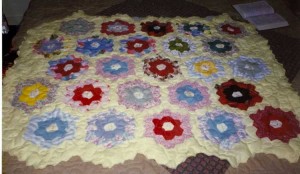 I have a Dresden Plate pieced by my aunts, and I quilted it in a large hoop many years later. Much treasured is my Cathedral Windows–a co-operative work of art by mother and me. 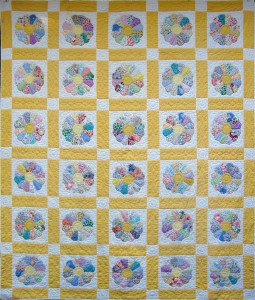 Then there is our FIRE quilt. Our tiny Kentucky town was almost destroyed by fire in the middle of the night in 1941.  Totally burned were the house and general store of my future husband’s parents. The dear ladies of the town each pieced a quilt square on which they embroidered their names and gave them to the Wheelers. 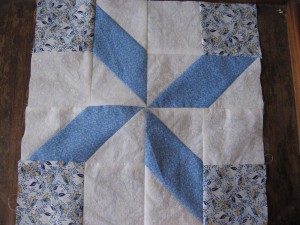 Perhaps my greatest achievement involved the “love stitches” I put into the three Little Sunbonnet Girl single quilts for my three granddaughters.
Many years later a dear church friend who didn’t quilt had one quilt she wanted done. She presented a wonderful proposal to six friends.  She would provide quilting frames in her “spare room” and would provide lunch for us if we would put stitches of love into her quilt.  When that was completed, we could bring our own quilts, and she’d still provide lunch! Those many weeks of love stitches strengthened our already blessed friendships.

BLESSED ARE THE QUILTERS FOR THEY ARE THE PIECEMAKERS!