The following recipe, which is frequently inquired after, is given for the famous whitewash with which the President’s mansion is adorned: 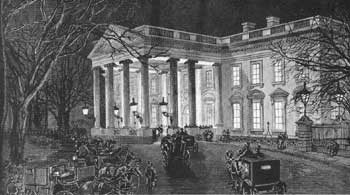 Take one-half bushel of nice unslacked lime, slack it with boiling water; cover it during the process to keep in the steam. Strain the liquid through a fine sieve or strainer and add to it a peck of salt, previously dissolved in warm water; three pounds of ground rice boiled a thin paste; one-half pound of Spanish whiting, and one pound of clean glue which has been previously dissolved by soaking it well, and then hang it over a slow fire in a small kettle within a larger one filled with water.

It should be put on hot

Add five gallons of hot water to the mixture, stir it well, and let it stand a few days covered from dust. It should be put on hot, for this purpose it can be kept in a kettle on a portable furnace. About a pint of this mixture will cover a yard upon the outside of a house, if properly applied. Fine or coarse brushes may be used according to the neatness of the job required. It answers as well as oil paint of wood, brick or stone, and is cheaper. It retains its brilliance for many years. There is nothing of this kind that will compare with it, either inside or outside work.

No material for Green

Coloring matter may be added of any shade desirable except green, for which there is no material that can be used with lime. Spanish brown will make reddish ping when stirred in, more or less deep according to quantity. A delicate tinge of this is very pretty for inside walls. Finely pulverized common clay, well mixed with Spanish brown makes a reddish stone color; yellow ochre stirred in makes a yellowish wash, but chrome goes further, and makes a color generally esteemed prettier. It is best to try experiments on a shingle and let it dry.