Pig in a poke means an offering or deal that is foolishly accepted without being examined first. 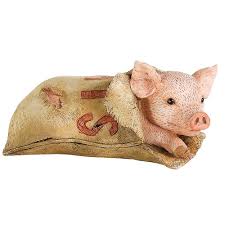 A poke is a sack or bag. It has a French origin as ‘poque’ and, like several other French words, its diminutive is formed by adding ‘ette’ or ‘et’ – hence ‘pocket’ began life with the meaning ‘small bag’. Poke is still in use in several English-speaking countries, notably Scotland and the USA, and describes just the sort of bag that would be useful for carrying a piglet to market.

RIBBON OF LOVE: 2nd edition – A Novel of Colonial America by Donna R. Causey – based on ancestors of the Cottingham family of Bibb County, Alabama – Inspired by true historical events, Mary and Henry Pattenden flee to America to escape persecution –  It is almost impossible to put the book down until completion. – Dr. Don P. Brandon, Retired Professor, Anderson University