Have you ever wonder what the term ‘the bitter end’ really meant?

The bitter end’ means the very end and comes from a nautical term. Anchor cable was wrapped around posts called bitts.

The bitt end (or bitter end) refers to the final part of the anchor rope near to where the rope is fixed to the ship’s deck. Usually marked with coloured rags, the bitter end derives its name from the bollards (or bitts) on the deck to which the anchor rope is tied. 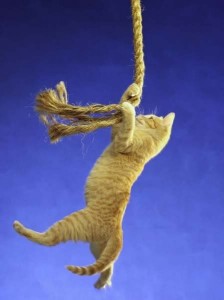 When sailors lowered the anchor, and it came across the rags on the bitter end, they knew there was no more rope left, meaning the water was too deep to set anchor and there was nothing else they could do. They had reached the end of their resources and were at the very end.

The Making of Donald Trump The culmination of nearly 30 years of reporting on Donald Trump, Pulitzer Prize-winning investigative reporter, David Cay Johnston, takes a revealingly close look at the mogul’s rise to power and prominence.

Did you know that you can download Ebooks to your computer or smart phone with FREE app. Click below to learn how!

Have you ever heard of a gyroplane? They were popular in the 1920s and 1930s
The Soapbox Derby has a long history – see [historic films]
Don't miss the stories, get a daily dose of history