Were you ever frightened when you were young? I remember being very frightened when I was 11 years old. My Dad had taken me to my Grandfather’s farm to hunt squirrels when it was still dark. We had walked along a narrow path for several minutes when Dad stopped and gave me instructions. He told me to wait until daylight and only then to continue slowly walking along the same path in the same direction and to listen for the sounds the squirrels made in the trees and the sounds of the nuts falling on the leaves below. He said to always keep my eyes moving throughout the tree branches to watch for squirrels. He also told me that he was going in a different direction and would meet me further down the same path. 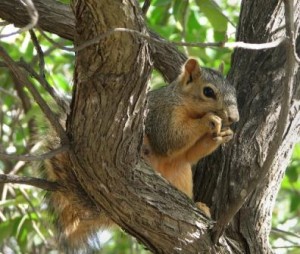 I sat down at the edge of the path and leaned against a tree to wait for daylight. After about five minutes I heard the sound of something traveling in the woods and coming toward me at a quick pace! My mind raced to determine what it might be since it didn’t seem to care how much noise it made or about traveling in the dark. Not even a dog would travel at that speed through the ground cover of the woods when it was dark!

I wondered what to do

I wondered what to do; I began to think about my firearm, a 12 gauge single shot shotgun. I then thought about the ammunition I was carrying, number 6 size shot for squirrels. I began to get nervous because this combination may not stop whatever was approaching. Sitting in the dark, feeling vulnerable, I wondered what to do. Should I wait until this thing is right in front of me and then jump out and in an instant decide to shoot or not? I decided to do something different. I rose up and faced the on-coming approach and put together the most ridiculous collection of sounds; yells, screams, knocking on the tree, etc. I then paused to listen. Whatever it was it kept coming at the same pace, but it changed direction away from me! If it kept the new angle it should miss me! 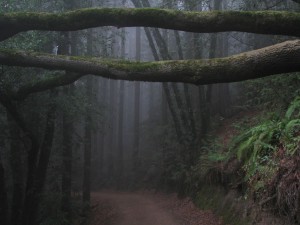 We have all probably been frightened by a sudden noise, or maybe a Halloween costume. But this experience was different for me. I was in the woods, alone, in the dark (and just the right age to let my imagination run wild).
How much of this ordeal would I tell my Dad when we got together? I said nothing.

As the years passed I continued to go hunting, but usually on cool frosty mornings in the DAYLIGHT and with FRIENDS!

Did you know there was a steam-powered plane in 1933? [See vintage film]
Sock tales – framed socks, recycled socks and candles of dirty socks
Don't miss the stories, get a daily dose of history