(Remember the joy of kite flying? This song and story by a contributing author will remind you.) 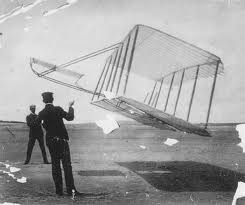 To tell a person to “go fly a kite” is a term of exasperation when one is fed up with that person.  People have literally been flying kites since begun by the Chinese in the 5th century B.C.  Kites were around in the United States in 1750 when Ben Franklin performed his experiment to discover electricity.  The Wright Brothers researched kites when developing the first airplane in the late 1800’s.  1860-1910 is known as the “golden age of kiting.”  They were used for scientific purposes such as  meteorology, aeronautics, wireless communications and photography.  Since World War II, kites have been used mainly for recreation.
My brother made kites from newspaper, sticks, fabric scraps and string.  The neighbors would shake their heads and say:  “Larry Hamrick and his kite!”  There was an open pasture near our home and he spent lots of time there flying those homemade wonders. 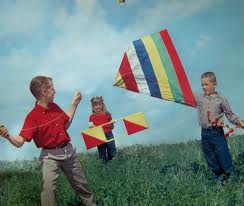 Kite Festivals are popular throughout the world. One is in Berkley, CA in July each year.  Washington State’s International Kite Festival is a week-long kite celebration and competition the third full week in August.  A man in his 80’s comes from Canada each year for this one.  He flies three kites at the same time and is very graceful with them.  I saw a video of that last year and would have loved to be able to share that with my late Brother.  I think of Larry whenever I see a kite.  Of course, those competitive kites are much more than the simple supplies he used. 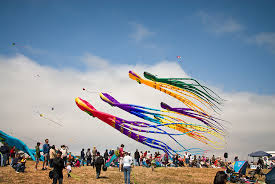 The beach is a beautiful place to enjoy kite flying.  I saw a man flying a kite for hours at Orange Beach last year.  Years ago when my  husband and I went to Outer Banks, NC there was lots of kite flying on that beach.  It is surprising  at the availability of kite shops in the Birmingham area.  Those kites are much more costly than the ones my Brother put together; but no more enjoyable.