On June 30, 1930 newspaper throughout the world blazed with similar headlines, HUNTER BROS PASS 453 HOURS IN THE AIR!

Prior to this day the Hunter brothers were simply two farmers who “turned from the plough to the plane.” 1 On June 30, 1930, they set a new world endurance record in the air. There were four Hunter brothers, Albert, John, Kenneth “Beans”) and Walter.

Story of Their Flying

An excerpt from a news story from the Chicago Tribune on June 27, 1930, tells a little about their life.

Back in 1923 the brothers went to St. Louis to buy a motorcycle, changed their minds, pooled their funds and made a down payment on an old Standard bipalne. They worked in a coal mine near Sparta and while they paid for the plane they studied aviation in the evenings. John went to St.Louis, received three hours of instruction, soloed, and came home to teach his brothers, one by one, how to fly.

“Some might think it isn’t right to say anything about that part abour working in the coal mine,” said Albert, “but I think it’s kind of funny—working down in a coal mine all day and coming out at night to fly in the air.” Albert’s father died 20 years ago and since then, he says, he has been “kind of looking after things.”

“When John and Kenneth started this flight, Walter and I dropped our work and came up to help and make it sort of a family affair.”

From time to time the plane swoops low over the airport to drop a not: One of these from John Hunter read:

“The toughest time I have is getting “Beans” (Kenneth) awake once he falls asleep. Last night I turned the wheel over to him and went back to sleep. In about a minute the ship nosed over into a spin. It made one and a half turns before Kenneth woke up. I’m going to wear my parachute after this.”

Another note signed by Kenneth read:

“A plug in the reserve fuel tank busted and spilled oil all over the place. It took us all afternoon to get it cleaned up. I sure was disgusted.”

Maj. Luke Christopher, chairman of the contest committee of the National Aeronautical association, flew up to visit the flyers yesterday and lower a congratulatory note to them.

“Stick with it,” the note said. “You have a good chance to break the world’s record.” 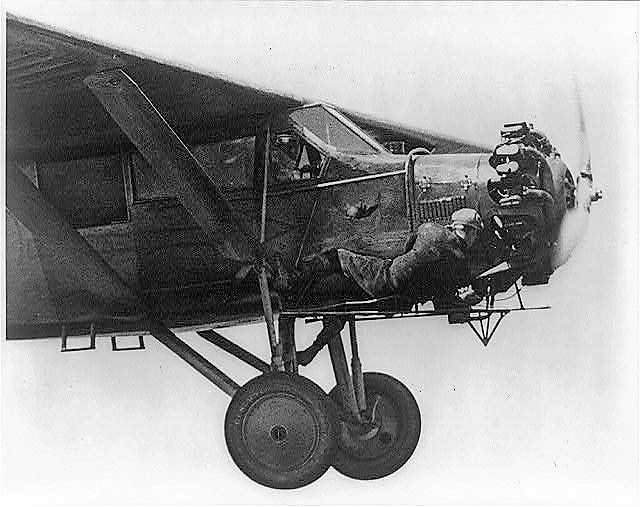 Photograph shows Kenneth Hunter lying down out on the cat-walk; his brother John can be seen flying the plane 1930 (Underwood and Underwood Library of Congress)

The brothers took off at 3:40 p.m. on June 11 and continued their flight until July 4th, after cruising for 553 hours, 41 minutes and 30 seconds. The plane, named the “City of Chicago”, flew at an average of 70 miles per hours and went a total distance of at least 38,758 miles and remained in flight for 23 days.2 Communication between the “City of Chicago” and their support on the airfield was by exchanging notes.

The following has been transcribed from The Tuscaloosa News June 30, 1930 about their record breaking feat.

The cheers of thousands burst the suburban Sunday stillness at Sky Harbor Airport when the plane came through the dawn with a new record on its wings. Half of this crowd had come early and the other hald stayed late.

Two score army planes—pursuits and bombers here for the army show—went up in the afternoon in salute formation. More than 40,000 automobiles honked through the heat of the day on the field and nearby roads.

There are four of these Hunter boys, all from “Egypt”—that part of Southern Illinois named for the land of the Nile. John is 27 and Kenneth 21: then Albert 33 and Walter 24, make up the ground crew that had contacted 167 times with the plane up to the last this morning.

Their sister Irene, also a pilot, cooks the meals.

From Sparta, Ill., where the Hunter boys were born to the farm, hundreds of congratulatory messages poured into the Hunter camp at Sky Harbor—and more hundreds of people chartered busses, road trains and drove automobiles to keep Sparta represented at the record-breaking.

Most of the messages were opened by the brothers’ mother, Mrs. Ida Hunter, and then sent aloft.

An unestimated fortune awaited the landing of the Hunter boys. The record itself will be worth many thousands to them. There will be emolument for endorsement of instruments used. There will be a percentage of the profits made by other planes at Sky Harbor which carried passengers attracted to the field by the endurance performance. Altogether the profits promise to run more than $100,000.

A message of congratulations from the home town chamber of commerce at Sparta, Ill., brought a grin on the face of Albert Hunter, and he remarked: “Yeah, They’re the ones who used to say “those Hunter boys will break their necks riding around in them new-fangled contraptions.”

On the refueling at 9 0’clock a pet-cock in the gasoline hose became stopped up and the tank in the “City of Chicago” was not filled.

With the running lights of the “City of Chicago” burst out, a later attempt at refueling was unsuccesful but one of the mechanics on the refueling plane, “Big Ben,” said the endurance ship had enough gasoline to remain aloft until after dawn today, when successful contacts were made.

Frequent repairs were made on the plane while it was in flight. “Spark plugs were changed, a magneto overhauled, and even a lost bolt in the engine mount replaced, as well as regular oiling of the rocker arms. For this purpose a light metal cat walk was rigged from the cabin doors to the engine on either side, and Kenneth Hunter, the younger of the four brothers, made regular trips to the motor. He also clambered out of the refueling door in the top of the fuselage and slid back to the tail to clear away string paper and other debris, blown back during refueling contacts, and threatening to jam the control cables.”3

This silent film uploaded by CriticalPast on YouTube records what happened when they landed.

In July 1980, a lavish weekend celebration was held at the Sparta airport, renamed Hunter Field, to honor the fifty-year anniversary of the Hunter brothers World Record Endurance Flight. Walter Hunter was the only Hunter brother that was able to attend the celebration. 4

For more information on the Hunter Family and the brothers, see The Hunter Brothers of Sparta Illinois

4The Hunter Brothers of Sparta Illinois

Start researching your family genealogy research in minutes. This inexpensive Ebook has simple instructions on how to get started with FREE sources. Download WHERE DO I START? Hints and Tips for Beginning Genealogists with Online resources to your computer immediately with the a FREE APP below and begin your research today!