Another house in Trenton, New Jersey whose history in point of interest rivals that of Bloomsbury Court is the Hermitage, formerly the residence of Major-General Philemon Dickinson, still standing on the River Road. ( in 1902)  Philemon Dickinson was a member of a distinguished family and one of the most dauntless soldiers of the Revolution.

His father, Samuel Dickinson, was a judge famous in Delaware’s colonial history, and his brother, John Dickinson, became governor of Delaware and Pennsylvania. 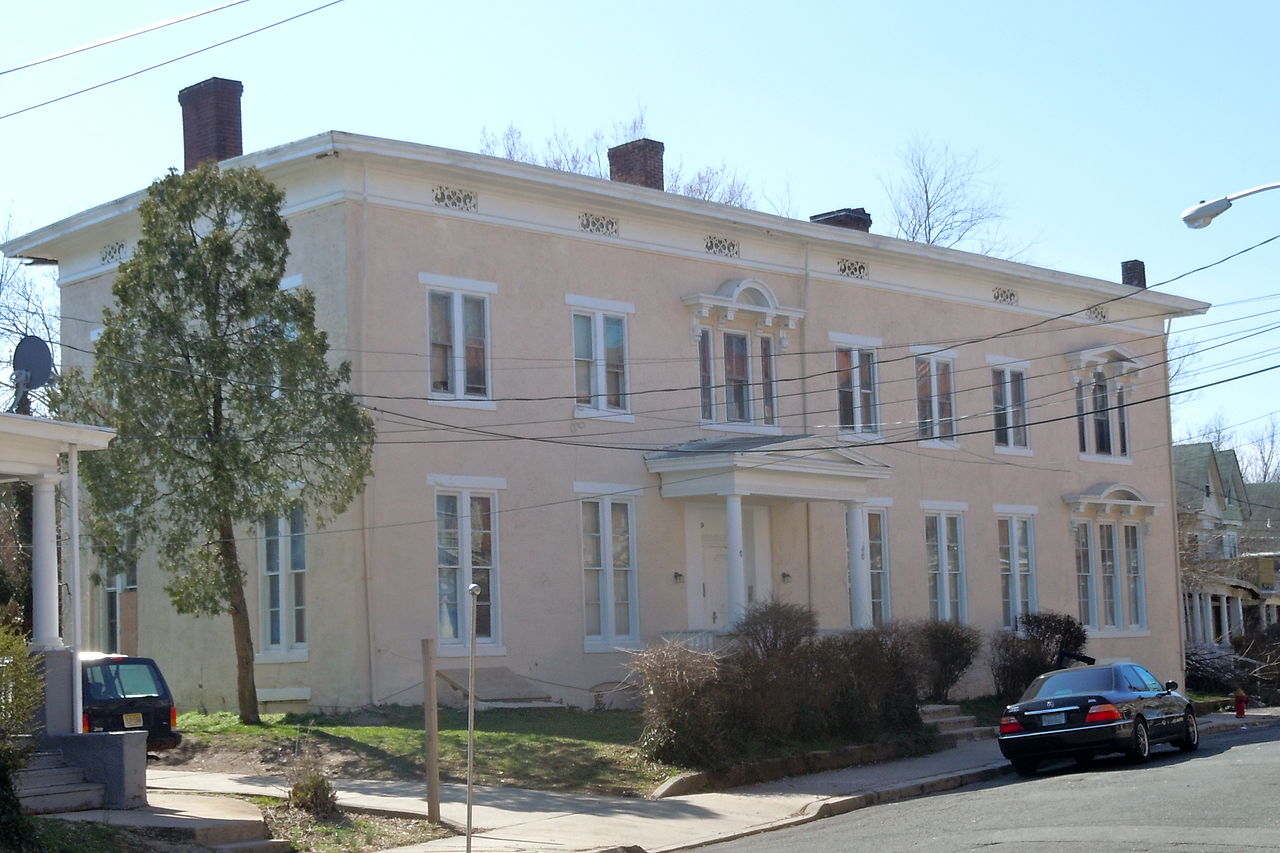 The Dickinson mansion was erected by the Rutherford family some years previous to the Revolution. Like a rush-light gleaming on his character is the interesting fact that General Dickinson purchased it from them in the July between the Declaration of Independence and the battle of Trenton,—showing a supreme confidence in the future of his country, for at that time there was almost no market for property, owing to the uncertainty of the government. 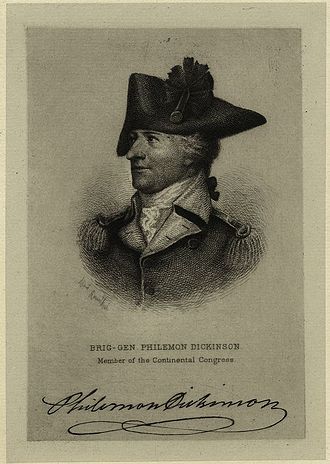 General Dickinson was a man of great wealth for the period in which he lived. His father had left an estate of over ten thousand acres on his decease in 1760, and a large share of it fell to him.

His wife, Mary Cadwalader, also brought him a considerable fortune, and as soon as the Hermitage came into their possession they commenced to improve it. We are told that it excelled most of the residences of Trenton in having a blue drawing-room with imported furniture, a great dining-room, a conservatory, and a whispering-room.

The last quaintly-named room must have been a great delight to the young people of Trenton. Mrs. Dickinson’s younger sisters, Rebecca and Elizabeth Cadwalader, and later her daughter, Mary Dickinson, were no doubt among the most envied of all the girls of the gay State capital. 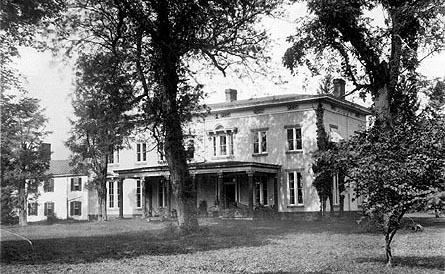 Many famous people were entertained at the Hermitage. John Adams, a personal friend of the general, often stopped there in the perilous year of 1777, before the close proximity of the British drove Congress from Philadelphia.

Later as President, during the cholera scare in that city in 1798, John Adams spent with the Dickinson family much of the time passed in Trenton, although quartered with his secretary and domestics at the old Phoenix Hotel. This ancient building stood until some years after the Civil War at the corner of West Hanover and Warren Streets. 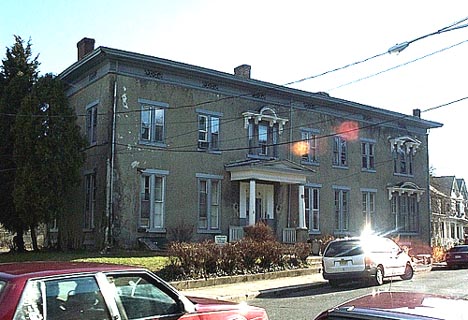 Little Adams must have enjoyed his jaunts to Trenton and its environs in the memorable spring of 1777 to meet Jersey friends and seek relaxation from state cares. In March of that year he wrote in disgust from Philadelphia to his faithful Abigail:

“This city is a dull place in compared to what it was. More than one-half of the inhabitants have removed into the country, as it was their wisdom to do. The remainder are chiefly Quakers, as dull as beetles.”

Trent’s Town was wide enough awake at that time, and there he no doubt found plenty of relief from his drab-clothed and drab-souled Quakers. From his diary we learn that he breakfasted and supped with the Jacksons, Smiths, Spencers, and others. Now and then he stopped at the Sign of the Green Tree, the tavern that gained his attention when he first visited Trenton in 1774, owing to the four immense walnut-trees shading it.

Earlier Days of the Hermitage 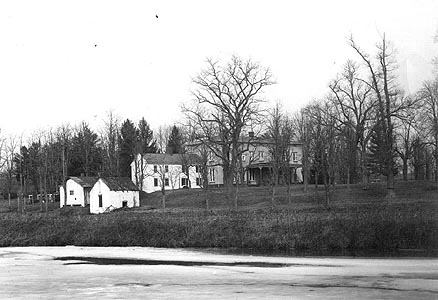 This old-time hostelry, conducted by the Williams family, attracted many travellers, notably the famous Marquis de Chastellux in 1780.

Although Adams enjoyed Trenton the town in 1777, it was a very different place from the brilliant city he found there twenty-one years later. The close of the eighteenth century was one of the notable periods in its history, especially its social history. Among the families then most prominent were the Howells, Brearleys, Furmans, Morrises, Clymers, Cadwaladers, Merediths, Covenhovens, Rutherfords, Dagworthys, Spencers, Bainbridges, Greens, Beattys, De Klyns, Wilcoxes, Erskines, and Reeds.

In the fall of 1798, when the yellow-fever was most virulent in the capital near by, all the government’s officials removed to Trenton with their families. The city soon became overcrowded, and it was almost impossible to obtain any kind of lodging. President Adams arrived October 10, and was greeted on State Street with fireworks and cheers; and an old chronicler informs us that later a round of elegant and fashionable entertainments was planned in his honor. 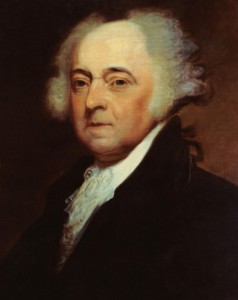 October days of 1798 were bright ones for Trenton, and the rooms of the Hermitage were always taxed with large gatherings of the first company of the republic. Lucy Pintard, a member of the famous Pintard family of New York City and later of the Jerseys, spent that month and the preceding ones in Trenton. One of her letters written from London in the following year, and still preserved by her descendants, contains a pleasing reference to the fashionables of the former place. She writes:

“The sprigs of the Peerage I have met with so far at Mrs. Rives do not equal in their fineness of attire our own ladies and gentlemen of New Jersey, to be found in the capital city. Ours have the innocence of a new formed society and government. Gaming is all the rage here and they keep it up at every house. . . . ‘Tis said a woman of quality has got herself into serious trouble by her gaming table and is threatened with the pillory.”

One is glad to learn that Trenton society was ” innocent” of some of the corruptions of English high life, for its members aped their English and French cousins as far as possible in their manners of living.

When the London world was enjoying the rage for “picnicing-parties” in the late nineties, Trenton as well as Philadelphia gentry began repairing to the rural shades along the Delaware for like diversions. The Fish House, about eight miles above Camden, became the scene of large gatherings. A portion of this old building, with modern additions, is in existence to-day.

There the belles and beaux sipped the famous “Fish-House Punch,” concocted of champagne, tea, sugar, Santa Cruz rum, and apple-whiskey; and if we can believe the tales of yesterday, its sparkling nectar helped loosen the tongue of many a backward swain.

The well-to-do gallants of Trenton copied Prince Florizel, the fashion-plate of Europe, in their clothes. Modified editions of his wonderful coats and breeches were always to be found at the tailors in Philadelphia three months after they had startled Brookes or Riggetts or the inmates of the drawing-room.

Poor Florizel was well on his walk over the bridge of years in 1799, and the adjective “fat” applied to him by pert little Beau Brummel was no misnomer. He still was the arbitrator of styles though, and introduced new fancies in raiment with all the ardor of his early Carlton Palace days.

English carriages became quite the rage in the city about this time, and the Hermitage stable possessed a beautiful and expensive example used by the second Mrs. Dickinson, pretty Rebecca Cadwalader, a sister of the general’s first wife. 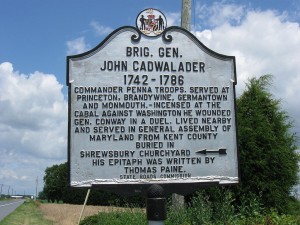 Strange as it may seem, Trenton in those days was not a city for dances. The dance-loving members of the elect had to take the Philadelphia coaches for the Assemblies when they wished to enjoy the pleasure of dancing in a large company.

Many South Jersey * names are on the subscription lists of those noted affairs, and most likely the inhabitants of Trenton often attended them.

The whispering-room of the Hermitage is one of the most famous rooms in the social history of New Jersey. There Madame Moreau, “the beautiful Parisian,” displayed her wonderful pearls and played on the harp for select audiences. In its dim recesses Louis Philippe, a future king, paid graceful compliments to the ladies of the Dickinson household.

When Alexander Hamilton journeyed to Philadelphia on government business, with his fair daughter Angelica for a companion, they stopped in Trenton and visited General Dickinson. Perhaps that fair girl’s tender heart, so soon to be stilled forever, beat faster in the whispering-room, for there was a handsome young Joseph Dickinson by her side, and no doubt he was an adept in the art of whispering the sweet nothings of that sentimental age.

Many a tale could most likely be told of the old room as fascinating as the romantic Trenton Tavern elopement of Frances Rutherford* and Colonel Fortesque of the British army, but its eighteenth century frequenters are all sleeping,—a number of its most devoted ones in the Friends’ Burying-Ground, about their genial host of the long ago.

A partial list of the celebrities entertained at the Hermitage was compiled some time ago by a member of the Dickinson family. It includes the names of Washington, Adams (John), Jefferson, Livingston, Franklin, Morris (Robert and Gouveneur), Clymer, Witherspoon, Rutledge, Pinckney, Middleton, Carroll, Lafayette, Steuben, Rochambeau, Greene, Putnam, Stirling, Wayne, Knox, Lincoln, and two kings, viz., Louis Philippe and Joseph Bonaparte. General Dickinson had two children,—Mary Dickinson, who became the wife of George Fox, Esq., of Champlast, and Samuel, who married a daughter of Samuel Meridith, first treasurer of the United States.

The house was extensively remodeled in the Italianate Style in the mid-19th century. In the mid-20th century, the street grid was expanded around the house (note that the building sits at an angle to Colonial Avenue). The house has been converted into apartments. The building was added to the National Register of Historic Places on May 17, 1974. Trenton Historical Society lists it as one of the top ten endangered buildings in the city.

* Frances Rutherford’s father, Robert Rutherford, was the proprietor of “The Legonier or Black Horse,” a noted Trenton tavern. Her elopement with Colonel Fortesque occurred during the Revolutionary period, and created a great stir in Trenton.