In the early 60’s I was sent to my hometown by my employer, General Telephone, to supervise the business office.   This office handled the contacts with the population of the main city of Ashland, Kentucky and eight other surrounding cities and consisted of 12 ladies and 1 man, Crayton Hamilton.  Crayton was strong, young, and mild mannered.  He once told me he played football in Hazard, Kentucky and that they had to play on a practice field with exposed rocks in it!  As I got to know Crayton we had conversations about his spiritual beliefs and when a famous evangelist came to our church I made sure that he and Crayton were able to meet and spend some time together.

Crayton was my pay station collector.  You remember those tall black rectangular phones located in prominent places where people passed.  You paid for the call by placing coins in slots at the top of the box.  These coins went down a coin track and into a collection box at the bottom of the phone.  If the coin box became full, coins would back up the track and put the phone out of order. 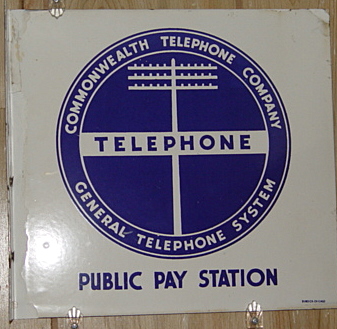 As a result the plant department would send out a repairman who had a key to the upper part of the phone where the electronics and coin track were located, but could not access the coin collection box at the bottom.  When making a repair the repairman could take the coins backed up in the coin track and there would be no way anyone would know whether he took them or not. 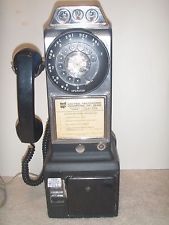 Another call would go out to the business office in order to get the pay station collector (using a different key) to collect the coin box on the bottom of the phone.  The coin box had a self closing door on top of it which closed when you started to pull the box out.  If coins had backed up through the door it would be jammed and could not be removed.  Fixing the jam meant the pay station collector would remove coins that the repairman could not reach and could keep those coins without anyone knowing it.

The director of security had to investigate

Believing this was happening often, the corporate office in Lexington, Kentucky asked the director of security to investigate.  His plan was to go to all the cities that were pay station collection/repair points and secretly jam the upper and lower sections of the phone with coins that had been dusted with a powder that showed up only when placed under ultraviolet light.  The end result of the investigation was that Crayton Hamilton was the only honest pay station collector that the company had in the state.

Not long after, I was transferred back to the offices in Lexington, Kentucky.  Later I learned that Crayton had been killed in a car accident at the intersection of I-65 and the Morehead, Kentucky exit.  If you travel between Lexington and Ashland you pass that intersection.  Every time I make the trip I think of Crayton.

Many of the readers will welcome the Holy Bible verses listed below like warm friends who regularly show up on their doorstep.  Others may be interested enough to look them up, especially in the order they are shown.  Of course the hard part is actually acting on what the verses call for.  I never knew if Crayton did the hard part before his car crashed.  It is the unknowing that brings the tears when I think of Crayton, just like it did writing this story.