All the ice from the winter months in the north was helpful to the southern states in the olden days as can be seen from this story. 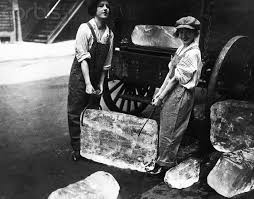 The Iceman Made Life Easier Before the Arrival of Electricity

My grandpa had a problem with ice, but not the type we are familiar with today. He never heard of the highly concentrated form of methamphetamine that so many people are now addicted to, nor did he have to deal with U.S. Immigration and Customs Enforcement (ICE) since there were no foreigners working on his farm south of Arab (unless “Arabians” are considered foreigners).

Grandpa’s biggest problem with ice was to prevent it from melting before placing it in a glass of sweet tea or the water jug that he took to the field each morning. Ice is something that the majority of us take for granted these days. We simply walk up to our refrigerator and press a glass against the ice dispenser on the door. The crushed or quarter moon-shaped ice comes tumbling out, and we pour our favorite beverage over it. Things weren’t so simple before electricity reached rural North Alabama in the 1940s.

Ice – or rather the availability of it – was considered a luxury at the time. Grandpa had to hitch a pair of mules to his wagon and travel to Guntersville to purchase a 100-pound block of ice. A tow sack was draped around the ice to shield it from the hot sun during the return trip home. Then there was the matter of how to preserve it once the wagon rattled up to grandpa’s farm in the New Canaan community.

Grandpa first dug a dirt pit in the side-shed of his barn. The block of ice was then placed inside a wooden crate, which was lowered into the pit. Cottonseed or sawdust was packed around the ice to serve as insulation. A tow sack was placed on of the ice block to keep dirt from getting on it. Finally, boards were placed across the top of the crate and dirt thrown over them to provide more insulation. Ice stored in that manner lasted about a week. 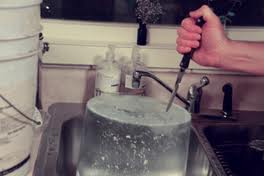 Armed with an ice pick and dishpan, grandma would walk down to the barn and chip off enough ice to fill tea and water glasses. A little dust and grime would settle on the frozen block of ice when the boards, tow sack and dirt was removed, so the ice had to be washed off before it was dropped in the drinking glasses. To receive a sliver of the cold refreshment was considered a special treat by Dad and his siblings.

Of course, the real treat would be on the 4th of July when Grandpa used the ice to make homemade ice cream. Sliced peaches or strawberries would be added to the vanilla and milk ice cream mixture to create a variety of flavors. Dad would furiously crank the handle on the freezer in anticipation of being rewarded with the creamy delicacy.

The fun was not over once the ice cream and headaches from eating it too fast had disappeared, however. The salty ice used to make the frosty treat would be eaten and enjoyed almost as much as the ice cream itself.

Before electricity was introduced to our area, country stores were able to sell cold soft drinks from a metal storage container (commonly referred to as a “Coke box”) that held crushed ice. The preferred manner for crushing it was to hit the ice bag with a hammer or drop it on the hard floor. 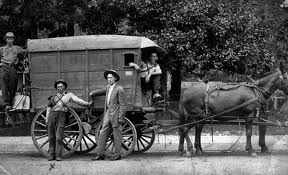 The availability of ice was much greater for those living in large cities. There, ice would be harvested from local ponds and lakes during the winter months and delivered directly to homes by the “iceman” in a horse-drawn wagon. This “natural” ice was later replaced by “manufactured” ice that had been made in plants. Ice companies supplied their customers with “ice cards” that listed the amount of ice they needed on delivery day.

The one-sided cards usually listed the number of pounds of ice (25, 50, 75 or 100) to be delivered. A wife would place the card in a window facing the street with the desired weight turned toward the top.

The card was highly visible as the iceman made his way down the street toward a customer’s home. This was especially important when delivering to apartment buildings since he didn’t want to needlessly lug a huge block of ice up a long flight of steps. Single-family dwellings required less ice and the iceman would remove the desired amount from the main 300-pound block on his wagon. A good iceman could chop off the requested amount of ice and be within a pound or two of the correct weight. He would then grab his ice tongs, throw the desired amount of ice over his shoulder and make his delivery.

Most suburban housewives stored their ice in store-bought iceboxes that were usually insulated with mineral wood, charcoal or cork. The interior was finished with galvanized metal, wood or porcelain while the outer wall was finished in wood or metal.

Melted water flowed from a drain into a pan underneath the icebox. Since the pan had to be emptied rather frequently, most wives placed their iceboxes on the back porch in case the pan overflowed.

In a scene resembling mice following the Pied Piper, neighborhood children would chase after the ice wagon and beg for slivers of ice chopped from the main block. More often than not, the iceman would accommodate them. 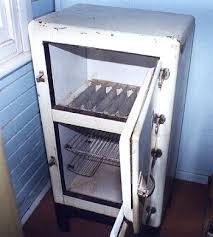 The arrival of electricity in 1943 made life much easier for my grandparents and others living in our area.

Most people eventually purchased refrigerators, which meant they no longer had to cool gallon jugs of milk by lowering them into their wells. Refrigerators also came with a small freezer compartment that allowed folks to “make” their own ice.

Metal ice trays that came with the refrigerator were simply filled with water and placed in the freezer. The cubes were frozen within a few hours and ready for use.

Grandma usually poured water over the top of the cubes so they would break loose more easily when she raised the handle on the tray.

Unfortunately, these early refrigerators were not “frost free” and the freezer compartment would often freeze over to the point that the ice could not be removed. Grandma mostly defrosted her refrigerator by unplugging it. Then she would take a knife and gouge at the ice and rake as much as she could into a dishpan.

Even though there was a drain pan at the bottom of the refrigerator, it would usually overflow at some point during the defrosting and leave water all over the kitchen floor to be mopped up. Cleaning up after defrosting a refrigerator was an aggravating chore, but it sure beat going down to the barn to chip off a little ice from a slowly melting, 100-pound block that had been buried in the ground.