I was born in this house on the wintry day of January 4, 1926.  Dr. Helms from Smith Grove came to “deliver” me.  This house was home to me for the first 16 ½ years of my life.  In September 1943 I enrolled in Campbellsville College, and my mother and dad moved to Bowling Green shortly afterwards.

My problem with the suggestion that I write a “short story” of my life in Rocky Hill is the word, SHORT.  All at once the memories are flooding in, and I’m not sure I can stop.

I remember that the greatest experiences of my life occurred in a winter revival at the little Baptist Church when I gave my heart to Jesus at age seven.  The preacher had to push away a thin layer of ice on the Whittle’s Pond that December day when I and several others were baptized.  Family and friends, in warm coats, sang, “Shall we gather at the River” as we came out of the water.  I remember the cooperation between the two little churches, when the Methodist had a revival, the Baptist attended every service and visa versa.  School dismissed for morning services, and we students marched down that rocky road to church.

I remember sweet little girls in pretty little hand made dresses.  Then there were those rascally teasing boys.

I remember the heart-breaking tragedy at the railroad tracks.  Each year at school we were given sheets of Christmas seals to help find a cure for tuberculosis.  There were contests to see who could sell the most.  Big brother Harold Cooke was driving little sister, Willodean and her little brother, Mearle around town to sell the seals.  Returning home, their car was stalled on the railroad tracks and all were killed when the car was hit by the afternoon train.  The whole community grieved with their parents. 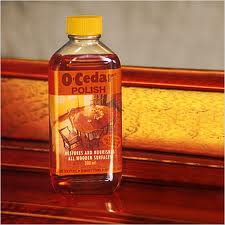 I remember “spring cleaning.” Each spring my mother and I cleaned that big old house from top to bottom, dusting and mopping with O-Cedar Oil.  Then the two of us would walk down the railroad tracks and gather armloads of honey suckle to put in Mason fruit jars in each room.  The house smelled wonderful! 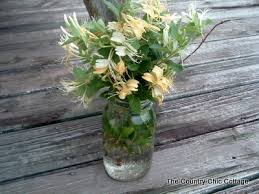 And I remember “Uncle Abe.”  Even in adulthood my mother loved to learn.  After teaching for nine months, she would go to Western Kentucky College and take a course or two during the summer.  In an English class, about 1934, her assignment was to write an essay.  She entitled her essay simply, “Uncle Abe.”  I still have those faded crumbling pages, and I’d like to share some of the excerpts form her essay describing a memorable resident of little Rocky Hill long ago

He lives in a crude, tin-covered dug-out which lies just on the other side of the railroad tracks.  The dug-out itself would be insignificant were it not for the thin spiral of smoke which rises form the rough hole in the rusty tin roof at all hours of every season.  Who is the keeper of this perennial fire?  Of course, it is Uncle Abe, the town’s most unique inhabitant.  He is much a part of the town as the “loafers bench” in front of one of the stores, where he is often sits and sleeps.

Uncle Abe can usually be seen— There!  He’s passing my window now!—his smoothly shaven head well covered with and old greasy-blackened cap.  This cap is the last reminder of his days as a railroad employee.

There’s a charred cob pipe held firmly between toothless gums, and a torn gray work shirt draped loosely over shoulders tired and stooped form work with a pick-axe for the railroad company.  His gnarled hands are clasped loosely at his back as he lumbers awkwardly along with his faded old eyes fixed upon the way before him—as if searching for some lost jewel. 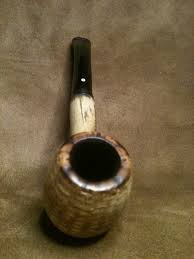 He lives alone living on his pension from the railroad company and pay for odd jobs around town.  He is getting old, but he is still known as the best “day laborer” ever.  His oily, filthy look is not caused by a desire to be unclean, but a delusion, which leads him to feel all bodies, especially his are infested with insects which, if not controlled, will take one’s life.  Consequently, he is known to bathe daily in various concoctions of gasoline, kerosene, and sand.  His clothing is always saturated with such mixtures.

Stooping to peer in the door of Uncle Abe’s home, one can see dimly in the inner darkness, two chairs with four rough planks resting on them and covered with a tattered blanket.  This is where he sleeps.  A small sheet-iron stove, a nail keg, and a wobbly-legged table complete the furnishings of this abode.

In spite of difficulties, Uncle Abe continues to mumble his prayers and to sing in an unintelligible monotone as he walks slowly along.  Who knows how soon it may be that he will fail to waken from a nap?  People will say, “There is one less man who tends to his own business and asks nothing of anyone.”  The story of his life will become a legend to be told to the children of those who are growing up now.  It will gain romance as it is repeated.

In July 1941, in the middle of the night, a fire swept through the little town of Rocky Hill.  Mark and Mary Wheeler’s store and home were among the many buildings completely destroyed.  The Wheeler family moved next door to our house, and at the end of world War II, I, Joyce Ray married the boy next door, Ruric Wheeler, on May 31, 1946.

In 1943 when Ruric volunteered for the Air Force, I went with his family down to the railroad track where a troop train would stop to pick him up.       (He and I were not seriously dating at this time.  I was just, “the girl next door.”) Uncle Abe also came to say “goodbye” to the soldier boy who had been his good friend through the year.  A the chuffing of the train began to leave, Uncle Abe shuffled over to stand by me and softly crooned in his gravelly old voice, “Oh, who will hold he snow-white hand when I am far, far away?”— Perhaps he knew something I didn’t know!

In conclusion, may I add one other bit of nostalgia?  Before our wedding, Mrs. Wheeler invited Rocky Hill folks to come by the house for a wedding shower.  Toward the end of the gathering, there was a knock a door.  I went to the door, and there stood Uncle Abe, stooped and dressed in the same greasy cap and clothes my mother had written about.  He spoke not a word, but held out to me a small paper bag twisted tightly at the top.  As I took it from him, he turned and walked away.  I opened the little bag and discovered a bar of SWEETHEART SOAP purchased at Ruric’s dad’s store. 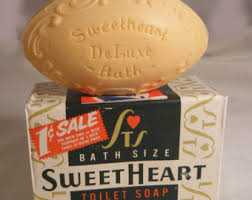 It was my favorite gift.