The filming of major news events was new when the San Francisco earthquake occurred in 1906. These rare films give a glimpse of life before and after the quake. 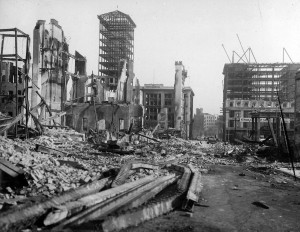 This film was take May 9, 1906, less than a month after the Great Earthquake occurred in April 18, 1906.  The location is Market and Mission streets, San Francisco, California and is a  compilation of views and pans among the ruins of San Francisco after the earthquake and fire and dates from Wednesday, May 9, 1906.

[Frame: 0100] The camera, positioned at the southwest corner of Mission and 5th streets, makes a hurried and jerky pan from the east side of 5th Street eastward to the south side of Mission Street. At the start of the pan, the ruined Lincoln School building is seen, with the dark profile of the Flood Building behind it on Market Street.

The camera pans right on a long row of windows in the ruined west wall of the Emporium department store [0130]. The tent in the foreground is probably a temporary “office” of the business formerly on the site. The pan continues further right and looks northeast down Mission Street.

[0338] The Rialto Building stands in the distance. The camera pans farther right, to another tent and a sign — “Safes opened 105 5th Street” [0420]. Many safes fused shut in the heat of the fire and others had to be cooled for weeks before being opened. [0441] The camera is at the southwest corner of 4th and Market streets, looking northeast across Market Street in afternoon light.

The Mutual Savings Bank (two blank walls) is in the background at Geary/Kearny and Market streets. The street traffic is part of the afternoon commute down Market Street to the Ferry Building. [0485] Note the heavily-laden wagon (perhaps containing a family’s possessions) and the Sanitary Laundry Company wagon. [1638] The camera captures a traffic jam on Market Street. The view is probably north, across Market Street just east of California Street, in the afternoon.

The laying of streetcar tracks along this section of Market Street may be the cause of the bottleneck. [1835] The view is northwest, near the southwest corner of East and Market streets, just west of the Ferry Building. A heavily-laden streetcar approaches the Ferry Building. [1908] Note the beggar on crutches. [2075] In the hazy background are Nob Hill and the south slope of Russian Hill (right). [2135] The view is approximately the same as the previous segment, with a streetcar beginning its run up Market Street. [2814] Note the sailor patrolling with fixed bayonet.

In the hazy distance unburnt dwellings on the summit of Russian Hill are visible. Nob Hill is in the distance, with the rectangular silhouette of the Fairmont Hotel. [3000] In this very brief scene the camera focuses on workers removing debris. The view is east on Mission Street between 4th and 3rd streets, just east of St. Patrick’s Church, part of which is visible at left. [3075] The camera pans to show the demolition of the facade of St. Patrick’s Church.

The camera is southwest of the church on Mission Street between 4th and 3rd streets. After a brief view of ruins along Market Street, the camera pans right (eastward) past two men near a fire engine [3270], to the church facade being demolished [3957].

Of particular interest is the cameraman seen in the foreground filming the action. He is photographing the film titled San Francisco Earthquake and Fire, April 18, 1906.

“Two filmed journeys down Market Street shot in April of 1906 sourced from the Prelinger Archives at http://www.archive.org. The video on the left has enjoyed wide circulation online, but has often been incorrectly dated to 1905.

Subsequent research by Historian David Kiehn of the Niles Essanay Silent Film Museum, has determined that the footage was actually shot by Harry and Herbert Miles on April 14th, 1906, only 4 days before the catastrophic event and subsequent fires leveled much of the city, resulting in conditions depicted in the video on the right, and of which the initial production source is unknown. Rick Prelinger, of the aforementioned Prelinger Archives has suggested that the post-event footage depicted on the right may have been shot by an Edison cameraman.”