My Dad grew up on a four hundred acre farm in eastern Kentucky. About one-third of the farm was thick forest which was very good for hunting, two-thirds of the farm was great for growing crops. Dad had five brothers and one sister and it took everyone doing their part to run and maintain the farm. The closest pharmacy, dentist, doctor, hardware store, etc. was 35 miles away.

Basically, you made your own clothes and repaired whatever you could, raised livestock, grew vegetables, and shot game (Dad was an excellent shot with anything) canning as much food as possible without wasting anything. I have Dad’s 8th grade (the last grade he finished) school book and it is mostly about things important to life on a farm, history of America and our Presidents. Dad had a talent for carpentry and he learned the trade after he married and moved to the city of Ashland, Kentucky where he helped my mother’s uncle build houses. He later got a job with Armco Steel Company in their carpentry shop and worked there until retirement.

He later got a job with Armco Steel Company in their carpentry shop and worked there until retirement. 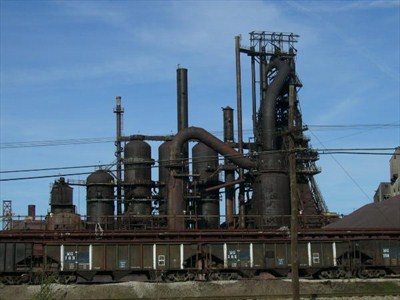 When my brother and I were growing up, Dad was very strict. I am sure this came from my Grandfather installing discipline necessary to run their farm. Dad believed in honesty and in doing the best job possible with anything you did. He also believed there was a place for everything and everything should be in its place (cleaned, oiled or whatever). He let my brother and I know that our thoughts and actions should be the same. Dad was not much for talking and his punishments were severe.

He had many talents

Dad had a talent for gardening and continued to do that throughout his life. Two relatives had land suitable for growing crops. These two pieces of land were about 45 feet by 80 feet and this is where my brother and I learned what work was. We gave away whatever we did not sell or use ourselves. The neighbors also benefited from Dad’s desire to help others by his talent for fixing things (as long as it did not include plumbing or electrical expertise).

One Christmas, Dad made a life-size reindeer out of wood and gave it to our next door neighbor. It was rustic, detailed and quite an eye-catcher. The neighbor put it in his front yard. There was a picture and article about it in the hometown newspaper. The local newspaper also had a segment called “Hometown Hero” and asked people to submit the name of a person who they thought were qualified for the title. Dad was chosen and got his picture along with a write-up about all the things that he did to help others.

After I married and was living in other cities, my wife and I made regular trips back home. I would always put my arms around Dad and give him a hug. He was slow to do the same as if it wasn’t a manly thing to do. On one of these trips back home, my brother and I talked about the best Christmas we had as children. We both quickly agreed that it was the Christmas of 1939 when both of us received bicycles.

My brother got a fancy 26” Columbia with a headlight on the front fender. My bike was a plain 24” Goodrich. 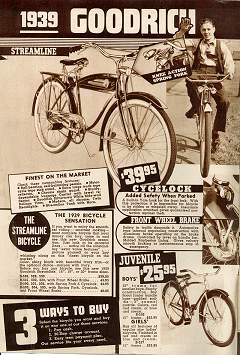 It would not be long before saddlebags, a light, and an ‘ah-ooo-ga’ horn activated by a plunger on top, would be added.

About 3 years later Dad went to a circus and upon returning told me that I should learn to ride the bike backwards. I looked at him with a puzzled look. He said, “You sit on the handlebars, face the rear of the bike and peddle backwards”. I fell many times but got to where I could ride backwards and change to the normal position, back and forth while the bike was moving. Dad never said anything about my riding backwards but I think he liked to watch.