Put up your Dukes – means to put up your fists and prepare to fight.

There are various thoughts as to how ‘dukes’ came to mean ‘fists’. 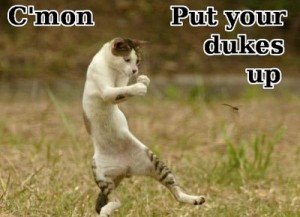 The most commonly repeated suggestion is that it derives from the Cockney rhyming slang – Duke of Yorks = forks = fingers/hands.

Another suggestion is that on the early 1800s, the Duke of York, Frederick Augustus, shocked English society by taking up boxing. He gained such admiration from boxers that many started referring to their fists as the “Dukes of York,” and later “dukes.