One of the most pathetic characters in its history

On 17 De Hart Street, hidden somewhat by the foliage of giant trees from the spires of the lower Green, is the old dwelling of Monsieur Sansay, the courtly dancing master of early Morristown New Jersey, and one of the most pathetic characters in its history. 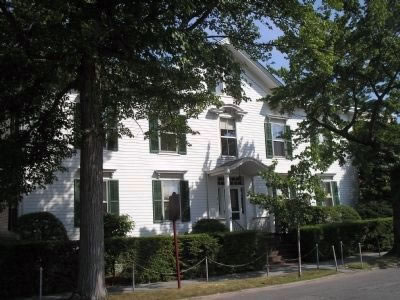 Past hidden in shroud of mystery

Any interesting long resident of Morristown who may be asked for information about Monsieur Sansay is sure to answer, “Why, he was the man who gave the dance to Lafayette;” but further than that they cannot go, for his past is hidden by the shroud of mystery, and tradition says the name itself was but a nom de guerre.

It was many years after the dreadful Reign of Terror in France when Monsieur Sansay first appeared in Morristown. 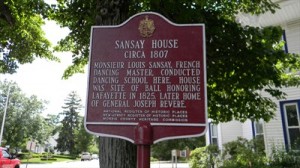 Count Auguste Louis de Singeron, one of the gallant band of officers who defended the king on the August night it ran blood at the Tuileries, had long ago taken his wares away from the corner by St. Paul’s in New York City; Madame De Bonneville, the friend of Thomas Paine, had closed her French school in the same city; and the famous Talleyrand no longer sat at his window in Newark counting the days to the time he was free to return to ” la belle France.”

They had all gone like so many birds of passage,—a picturesque phrase of early American society was ended; and comtes, vicomtes, and others bearing the titles of France’s fallen nobility no longer masqueraded as waiters, barbers, shopmen, and in like menial vocations.

The people of Morristown were quite familiar with French emigres when Monsieur Sansay arrived in their midst. The town, like every other noted spot in New Jersey, had its French visitors, and a few stray reminisences of them still live in the minds of some who cherish their memory.

One still saw the handsome Thebaud, whose father had been of the royal bodyguard to the unfortunate King Louis XVI., telling stories of the French court, fair Trainon and its lovely demoiselles, and the beauty of Marie Antoinette the Austrian, to a group of rustics in one of the village emporiums; another remembers Vincent Boisoubin, an elegant aristocrat of the old regime who detested Lafayette as “le traitre Lafayette;” and yet another cherished the tale of a Comte Massue eating in one of the rooms of the Sansay House and crying from sheer joy between each mouthful at the sight of his little countryman.

Sansay moved there in 1807 and taught dancing

Some time about the year 1807 Monsieur Sansay erected the house on De Hart Street, and there he gave notice to the public that he was an instructor in the art of terpsichore.

Early in the history of Morristown dancing seems to have taken a strong hold on the aristocratic portion of its small population. In the memorable winter and spring of 1780 there were the assemblies at O’Hara’s Continental Bail-Room.

The subscription list* for these affairs is in the possession of the Biddle family of Philadelphia, and it is most interesting, as it tells us that the five or six dances cost no less than thirteen thousand six hundred dollars. Our currency was at a low premium in those days, and the thirty-four gentlemen, headed by General Washington, who paid four hundred dollars apiece for a few evening’s enjoyment could have purchased very little with a like sum, as “silver hair-powder, such as the French court uses,” then cost three hundred dollars a box.

After the army had gone and the best people of the town no longer attended assemblies on the officers’ invitations, the few who loved their quadrilles and morris-dances still danced on. The ladies discarded muskmelon hats and brocaded stomachers for the littlewaisted, slim Greek gowns of the directoire, and viewed with favor the dances the expatriates had brought them.

Gay expatriates they ofttimes were, and they still saw in their minds’ eyes the Place Royale, St. Cloud, Versailles, and the Louvre basking in the sunlight and untouched by the bloody fingers of the new France of the Sans-Culottes, and so they had the heart to be merry among the more simple-lived Americans. They had forgotten the horrors of the Conciergerie, La Force, and Des Carmes.

Morristown was ready for him

When little Sansay opened his dancing-room, a few years later, Morristown was ready for him. In the morning, before the hour of eight, was his time for the children, and hundreds of eager boys and girls in the long ago trooped to his house after the sun had risen and laughingly peered into the windows.

Their older brothers and sisters came later, and the Sansay who met them was more elegant,—a Sansay, tradition says, appearing in all the glaring impotence of a silk and broadcloth attire a trifle the worse for wear.

Many and many an aspirant longing and stumbling for the grace of a Nash or a Brummel he initiated in the mysteries of the feather step, the spring step, and all the intricate mazes of the courtly dances of the old regime.

At stated intervals of once a month Monsieur Sansay held his exhibition days, and on such occasions many proud mothers would rustle up the stairs leading to the dance-room to view their childrens’ progress with delighted eyes.

Then it was that the little dancing-master was happiest. Like an aged butterfly under the influence of the sunshine he would flit and pirouette over the floor with his pupils, now and then pausing with a grandiose manner to compliment some blushing damsel on her pas leger or belair.

From one corner of the room would come the notes of the harpsichord tinkling protestingly the sweet melodies Sansay had learned in his youth in the Salles de Dance of the West Indies. “Now swing this way, mes petites” he would call out as he essayed a movement. “All ready for the minuet? It will entrance you, mes dames.”

A memorable ball was held for the Marquis de Lafayette

With bows to his smiling patronesses, he would form the pupils in lines. Then a clap of his hands was the signal for the most graceful of dances to begin. Those were happy days, for at that time the clergy of Morristown permitted their flocks to practice the graces of their ancestors, and poor Terpsichore was not held to be in league with the devil.

For the long contemplated arrival of the Marquis de Lafayette from Paterson, on July 14, 1825, Monsieur Sansay arranged the memorable ball which has caused his name to go down as the most famous dancing-master in New Jersey history. 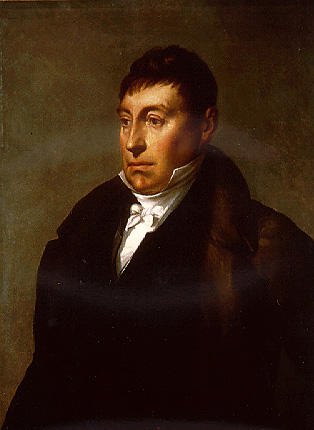 On that evening, after the much feted marquis had finished dining at the home of Charles H. Ogden, a noted citizen living at the corner of Market Street and the Green, all the well-known Morristowners of that period hastened to the Sansay dancing-room. There by the lights of myriads of wax candles the hero-worshippers braved the hot summer weather by dancing and feasting in honor of the popular idol.

The Palladium of Liberty, the Morristown paper of that day, does not contain an account of the assemblage and a description of their costumes like our modern journals, so we will have to picture the company ourselves. The most important and wealthy men of the town were all on the reception committee, and we can see them with their good wives a pompous line along the wall.

Popularity of the school began to wane

On the floor the pretty Morristown girls are whirling about with their country cavaliers in some merry waltz or gallop. There were others besides country-bred youths present that night, too; for it is said at least one bevy of gay city sparks drove over by post-chaise from the Forest Garden at Paterson to share in the festivities.

Some time after Sansay’s ball for Lafayette the popularity of the little Frenchman’s dancing-school began to wane. The rigid Presbyterians talked of too much dancing in Morristown and of a set of young people growing up pleasure-loving and ungodly. The dancing classes began to thin rapidly, and affairs reached a crisis when the Rev. Albert Barnes, the Presbyterian clergyman, preached a fiery sermon against them, even reviling the personal character of the little Frenchman. 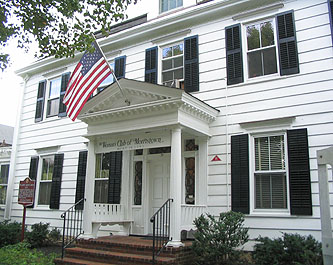 Although still upheld by many of the best of the townspeople, poor Sansay was too much of a gentleman not to take the matter to heart. He soon sold his house for a very small part of the sum it had cost him, bade good-by to his old friends, and left by coach one morning for Elizabethtown, that one spot in New Jersey which always held out welcoming arms to the exiles of France.

Mystery shrouds his death as well as his life, for there is a tradition that, becoming a prey to melancholia, he hung himself in one of those old houses on the outskirts of that town, and another that he came back to die in his former Morristown home. The first tale is probably true; but we could think of his pitiful fate with less sorrow if we knew he really died in Elizabethtown, for there at that time some of the customs and traditions of the France of the Capets he loved still lingered.

The house he built on De Hart Street was purchased by Jacob King, a member of the well-known King family still prominent in Morris County, and was afterwards sold to General Joseph Revere, a grandson of Paul Revere, of Revolutionary fame. The dancing-hall where Monsieur Sansay gave a ball to a marquis was years ago divided into bedrooms, but the old house is in many respects unaltered.

* This paper reads as follows: “The subscribers agree to pay the sums annexed to their respective names, and an equal quota of any further expense which may be incurred in the promotion and support of a dancing assembly to be held in Morristown the present winter of 1780.” Among the names it contains are those of Generals Knox, Stirling, Wilkinson, and Greene; Colonels Hamilton, Jackson, Hand, Erskine, Baron de Kalb, and others.