Lewis Wickes Hine (September 26, 1874 – November 3, 1940) was an American sociologist and photographer. Hine used his camera as a tool for social reform. His photographs were instrumental in changing the child labor laws in the United States. Below are some photographs he took in 1913 in Texas with his comments.

The song below, “Firebrands for Jesus” was recorded at Arvin FSA Camp, July 28, 1940 of the Texas Gospel Singers. The performers include Mr. and Mrs. Trueman (from Library of Congress)

Two Photographs below is of some Itinerant Texas farmers who rent a farm for a year or so and then move on, giving them nomadic habits and everything is temporary. House unpainted and ill-cared for. The children from five years old upward pick cotton and help with the farm work, but get little or no schooling. It is estimated by State University that 300,000 children are thus affected in Texas alone. Beginning with the five year old girl here who picks some, all work including the women. The nine year old girl picks one hundred and fifty pounds a day. Father is in town. Farm comprises fifty acres and they get about twenty bales of cotton, this year which is not a good year. Been here one year. Farm of J.W. Vaughn. Route 6. Location: Corsicana, Texas. 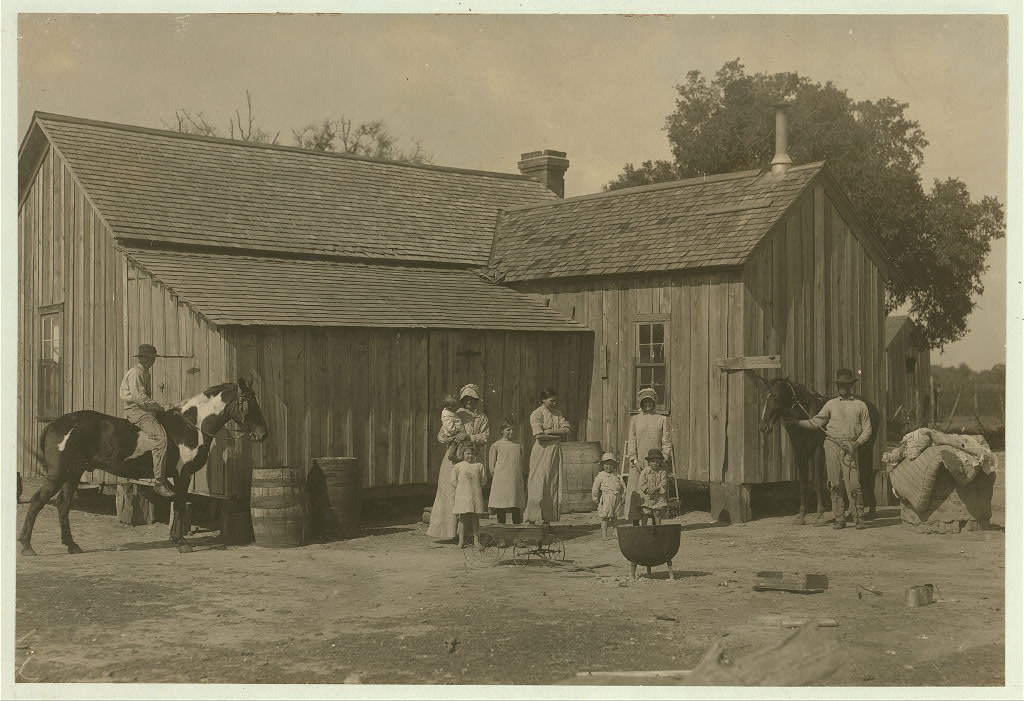 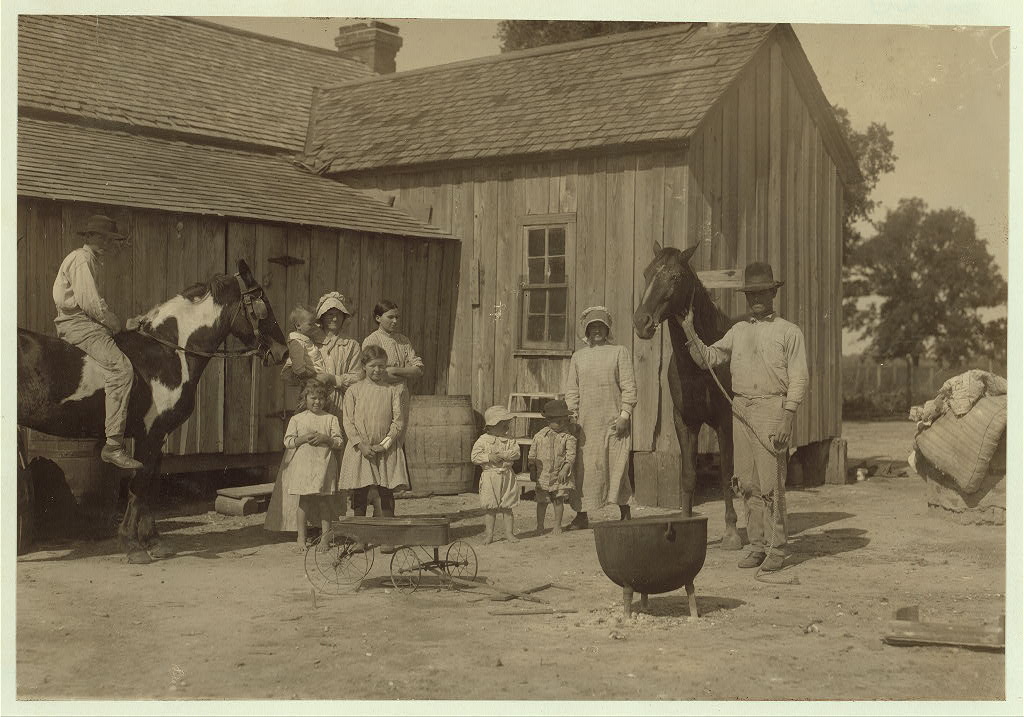 Home of family of “Renters.” 9 members, near West. Everything run down. Location: West, Texas 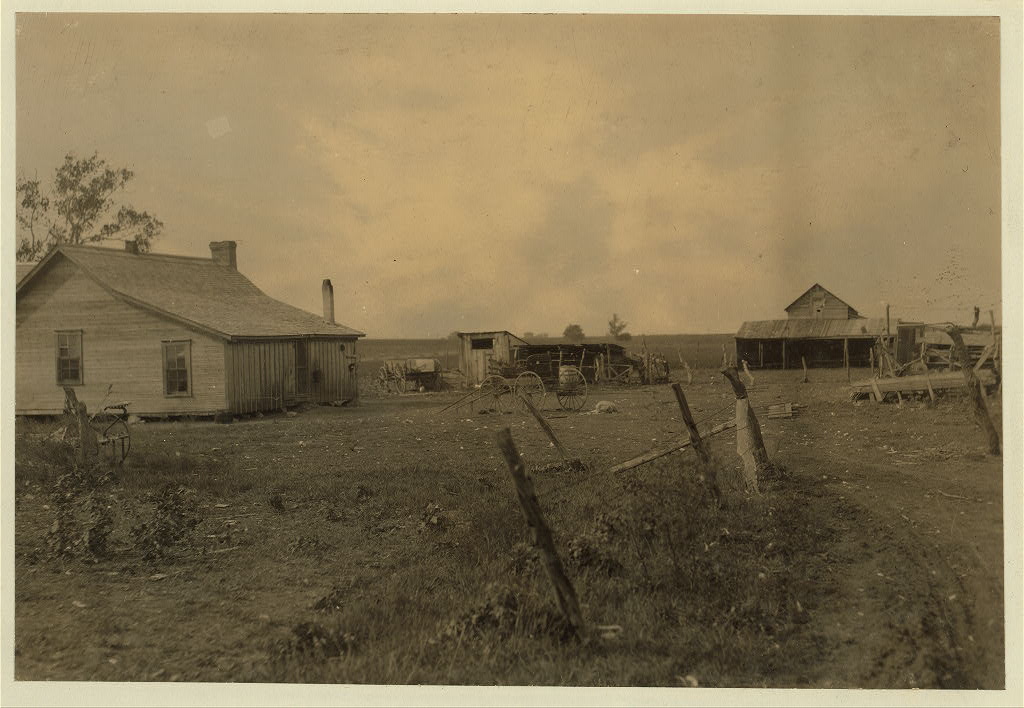 A dilapidated “renters” home near West. The Tripp farm. Five in the family. Girl (apparently fifteen years old) is married. The farm contains a hundred and fifty acres now. A larger farm of eight hundred acres was cut up into this and three others – to rent.  Location: West, Texas 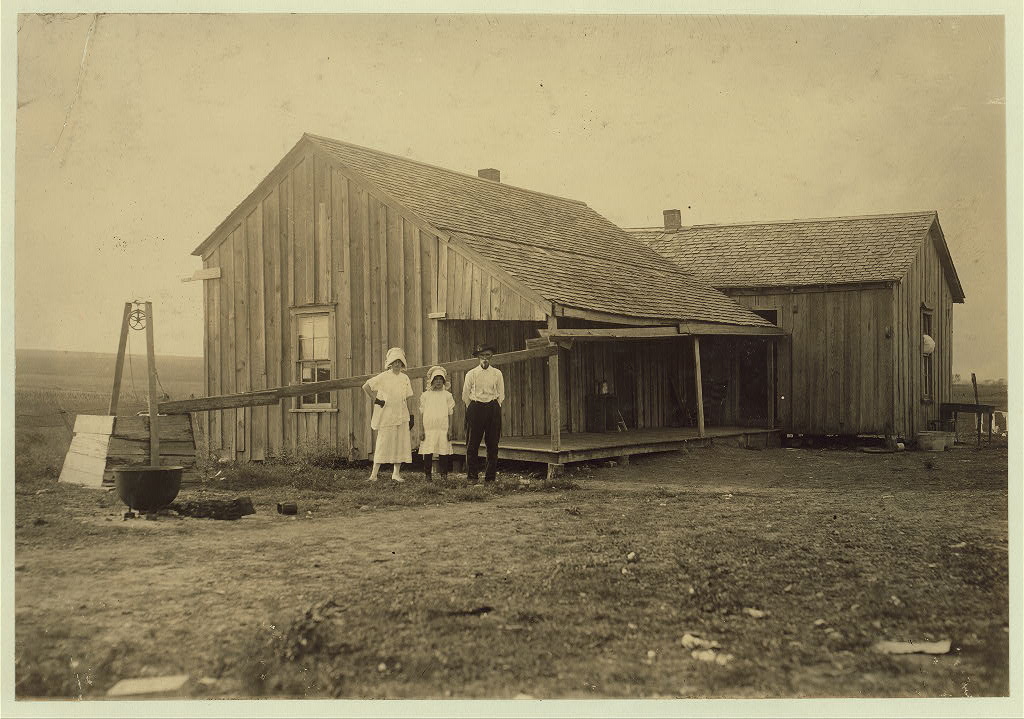 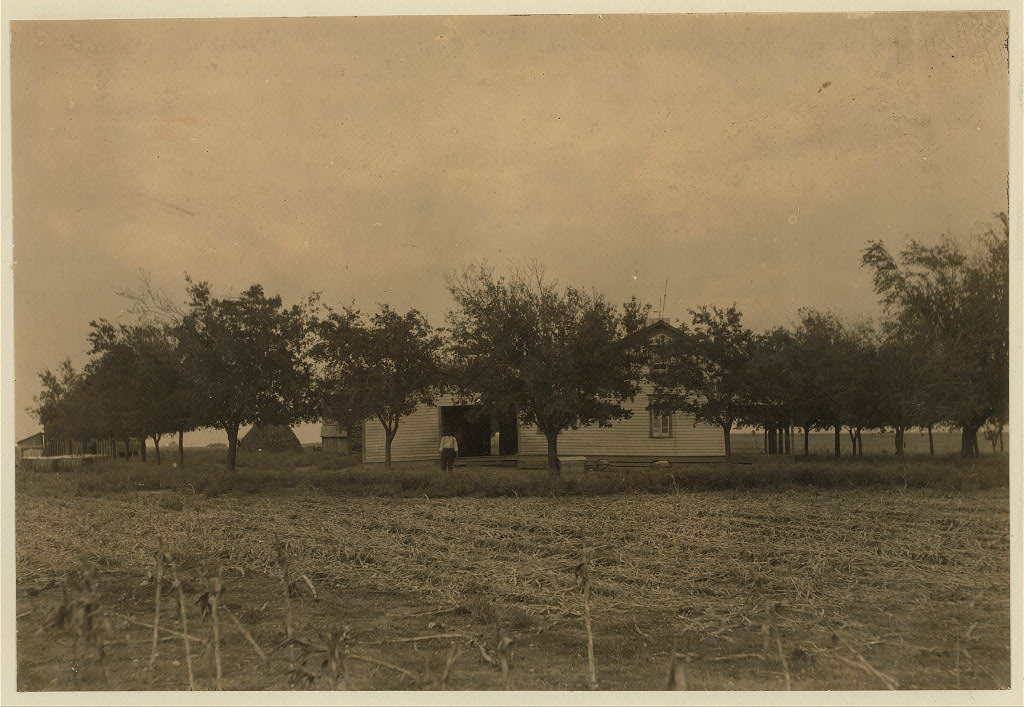 Sulak family, frugal Bohemian farmers own an eighty acre farm near West. Will raise twenty bales of cotton this year. These are all members of family. The five year old picks cotton some. The seven year old picks one hundred pounds a day. The nine year old picks about a hundred pounds. The eleven year old two hundred pounds, thirteen year old two hundred and fifty pounds. The adults pick three or four hundred a day. Note the care they take of the children and of the home. (It was the end of a week and a sort of holiday, but the whole situation shows how much better standard the farm owners keep than do the “renters”.  Contrast with this photo some of those of the “renters.” Location: West, Texas 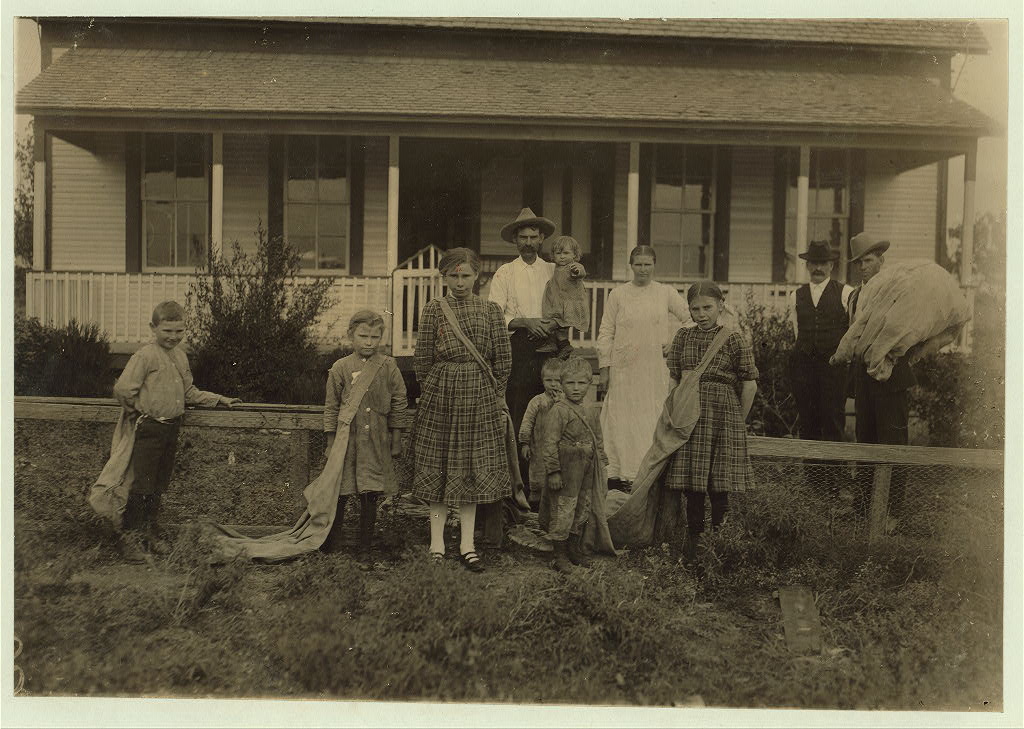 Part of a family of Louis Benkendorfer a Bohemian farmer who owns this farm of eighty acres near West. Will get twenty bales of cotton and other crops too. The five year old picks fifteen pounds; ten year old three hundred. The 12 year old girl and other pick, (not in photo). Farm well kept up. Location: West, Texas 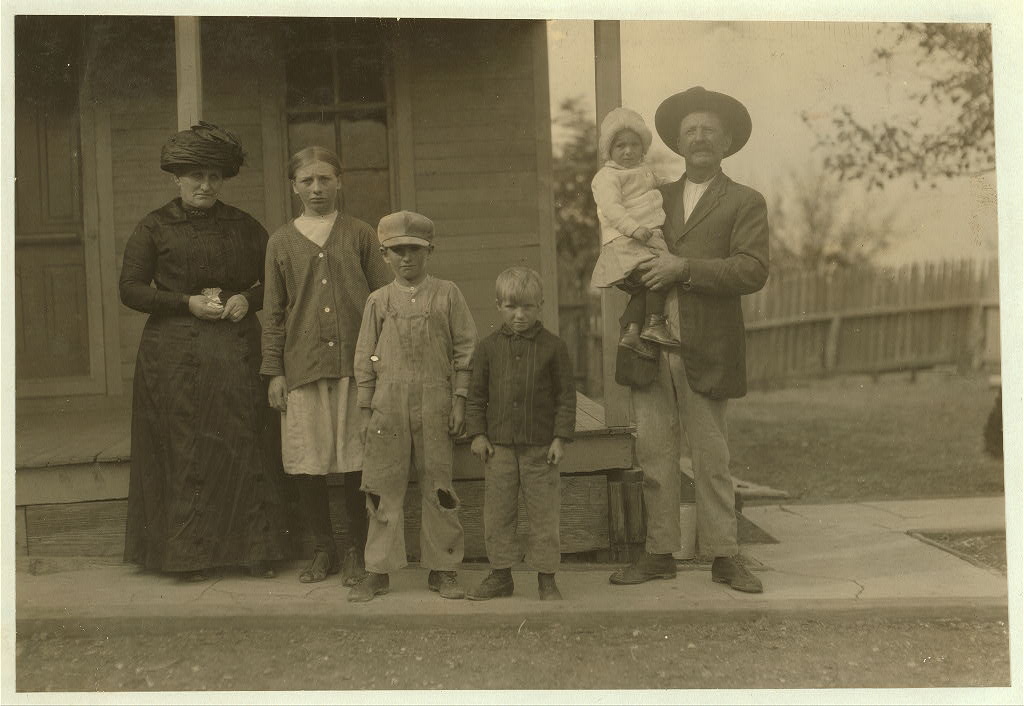 Another Benkendorfer farm near West. Owned by father and well kept up. Mandy, six years old, picks twenty-five pounds a day. Sophie, nine years old picks ninety pounds a day. Seven in family. Frugal Bohemians. Contrast these owned farms with those of the renters. It is estimated that over half of the farms around here are rented. Location: West, Texas. 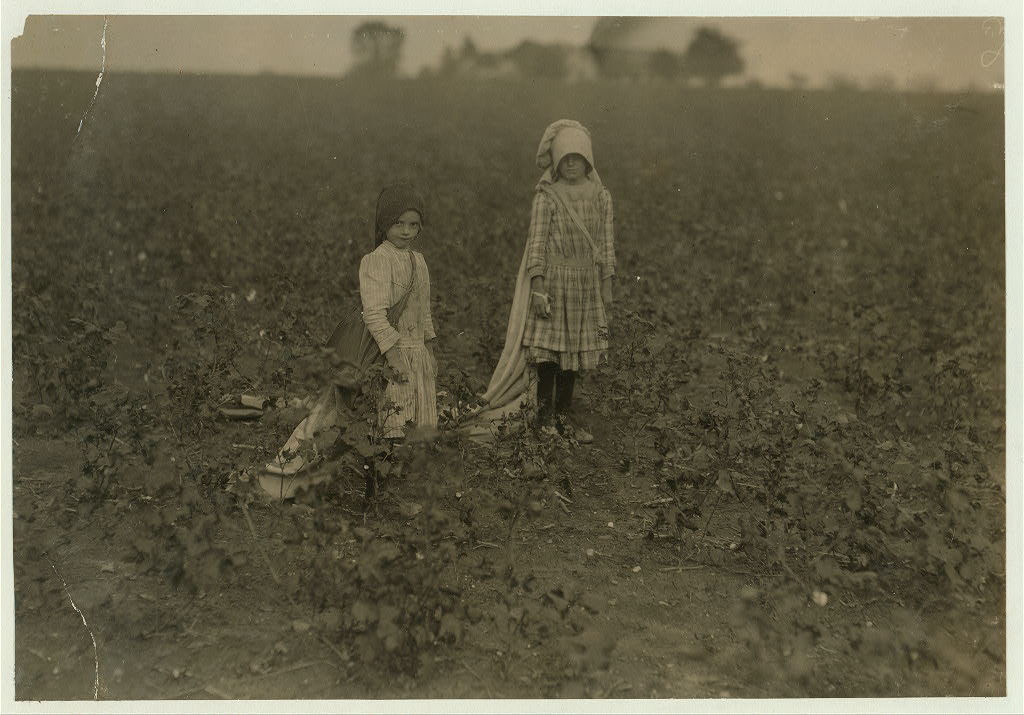