“He’s coming to town? Really? Did you say we were taking a field trip to watch the filming of the movie, ‘Beneath The 12-Mile Reef?’” (You could view it free of charge at retrovision.tv)

That was my 9th grade voice. I was unbelievably excited about the prospect of seeing Robert Wagner. At that time, he was in his early 20’s and I was an awkward 14-year old, who was very shy and reserved.

Questions filled my mind, even though I was excited.

“Would we get to see him up close? Would he be friendly? How could I possibly talk to him when I can’t even talk to my fellow classmates because I am shy?” 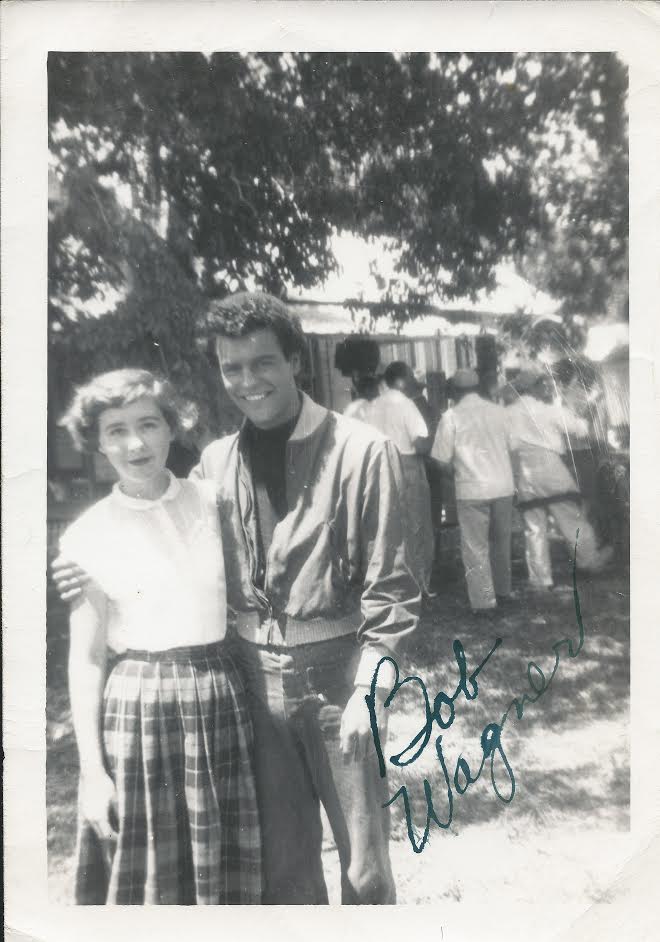 There he was. (Even though Terry Moore and Gilbert Roland co-starred, my eyes were only for Robert). He had black (dyed) hair that had been curled and dark skin. Apparently, his looks were the product of what the movie industry thought Greeks would look like. At any rate, he was handsome with a great smile that showed even white teeth. He was wearing a jean-type pants, a dark tee shirt and a half-zipped jacket.

I don’t remember any conversation or whom I was with. My eyes were only for Robert Wagner, the most handsome guy I had ever seen. I was mesmerized.

Our teacher had taken us on this adventure as a field trip. As I recall, we watched the filming most of the day. The same scene was shot about 7 times. It was the scene of a woman walking toward a gravesite. You would think that would be an easy one, but she patiently did it over and over again. (I think this scene involved Gloria Gordon who played the part of Penny Petrakis).

I don’t even know who had the camera because I was in la la land but suddenly we were standing in line and waiting to have our picture snapped with Robert Wagner (Terry Moore was not on the set that day). I watched with eagerness and anticipation and then, it was my turn.

Robert greeting me with a big smile and “hello” just like a regular guy would do. That eased my shyness a bit, although I can’t remember if I even spoke. Just before the picture was snapped, he came closer to my side and put his arm around me. Then, “click” and it was over.

I realized he was more than a movie star. He had a kindness that was shown towards a shy, awkward 14-year old that I would never forget. He was just a regular – kind of.

Beneath The 12-mile Reef

I have seen the movie a few times and love it. It was filmed in Tarpon Springs, Florida (where I went to school), Key West, Florida and the beautiful Gulf of Mexico.

The movie begins with a narrative: “he world beneath the sea is beautiful and dangerous… and the 12-Mile Reef was too dangerous and too beautiful… The deep you go, the more beautiful it was…”

It is a great love story between Gwyneth Reys (Terry Moore) and Tony Petrakis (Robert Wagner). The problem was that their two families and two cultures are fighting for existence. The situation was that Gwyneth is a Conk (Key West) and Tony is a Greek (Tarpon Springs). Both families were at war regarding sponge diving. More specifically, it was about territories and who could get the most or best sponges. The sponge divers did their diving always knowing they could lose their life. The sponges would vary greatly in shape, size and color…The more prized and valuable sponges were found in the deep of the 12-Mile Reef. The sponge was valued for its size, woolly texture and irregular surface.

Here is the cast of the movie:

Variety does not give a good review of the performance of Robert Wagner and Terry Moore but I thought it was outstanding. Here is what Variety said.

“[The squeeze-lensing gives punch in the display of underwater wonders, the seascapes and the brilliant, beautiful sunrises and sunsets of the Florida Gulf coast. In handling the young cast, Robert D. Webb’s direction is less effective, particularly in the case of Robert Wagner and Terry Moore. Both are likable, so the shallowness of their performances is no serious handicap to the entertainment.”

If you choose to watch this great movie via retrovision.tv let me know what you think.

Especially let me know what you think of Robert Wagner……

to see all her books.