We often remember the Titanic sea disaster, but did you know there was a sea disaster that even surpasses the Lusitania and Titanic combined.

On 30 January 1945, 30,000 people mostly women and children drowned in the freezing waters of the Baltic Sea. Thirty thousand people—at least, that is the safe estimate. The true number might be 40,000, for the sandy beaches of Rugen and Pomerania were piled high with corpses in the days that followed, when the Baltic began to reject the pitiful remains of those whose lives it had taken.

At the time of the disaster Hitler was still alive, and he wanted no publicity regarding the disaster. Additionally the war in the Pacific had reached a climax.

Forty thousand Americans had landed in Subic Bay and MacArthur was pressing forward from Leyte Gulf to conquer the Philippines. No one had any attention to spare for what was happening in the Baltic.

And at the time the Russian government did not wish the world to be told, nor since that time has it wished the world to be reminded of the fact, that several millions of the future subjects of Russian and her satellites fled in terror before the “liberating” Russian forces, and that during that flight the Russian navy was responsible for a maritime disaster so huge that the loss of the Titanic seems insignificant beside it.

It was a frigid winter in January, 1945 when the flight of a panic-stricken people from the eastern provinces of Germany began. With temperatures below zero, no fuel, no food, and roads and railways choked with convoys, hundreds of thousands of women and children and old men headed westward. Millions of Germans fled from the Russian forces towards a homeland “that made no preparations to help them. 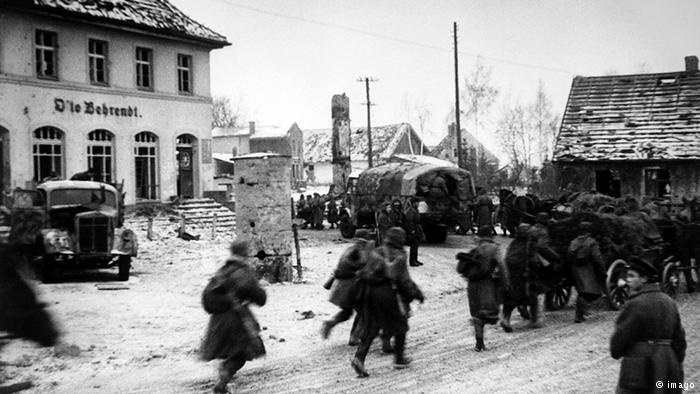 As the Russian armies reached East Prussia, masses of refugees “were squeezed into the narrow peninsulas jutting out into the Baltic.” Many starved and froze along the shores of the Baltic sea. Admiral Doenitz, Hitler’s right hand man, was appointed to handle their evacuation on ships in the Baltic. He gave the order, “and floods of refugees came pouring on board the ships like water through a burst dam.”

The decks were thick with snow and ice, and the gloomy sky of the short winter day bore promise of further storms. Every available inch of deck throughout every available ship was occupied by refugees.

One of the ships, the Wilhelm Gustloff, set out into the storm alone, for she drew too much water to take the inshore route followed by the other ships. As she pitched and rolled in the Baltic sea, the passengers endured the miseries of seasickness. It is estimated that she held at least 10,582 passengers and crew.

Meanwhile Russian submarines had pushed far out into the Baltic. One of them was watching this obvious escape route. Perhaps the Russian captain was not aware that the ship was loaded with thousands of helpless people. He approached the ship at close range and took aim.

At nine o’clock at night he hit the Wilhelm Gustloff with three torpedoes. Even so, she floated for half an hour—half an hour during which the frantic people on the icy decks fought for room in the lifeboats, and during which an ancient German torpedo boat was able to arrive and try to save lives; not as many as she might have saved, for she had to beat off further torpedo attacks.

The Wilhelm Gustloff finally turned on her side and sent the passengers into the icy waters. At the same moment, a second evacuation ship, the General Steuben was on her way to Pillau and she probably had 10,000 people on board as well. She was hit by a torpedo off the Stolp Bank and sank in minutes in the darkness. This ship was followed by the Goya, another old ship which was also hit by torpedoes. Her boilers exploded and she sank in a few seconds. There were other evacuation ships sunk along the coast at that time, too, making this incident the largest maritime disaster ever recorded in peace or war.

Death in the Baltic: The World War II Sinking of the Wilhelm Gustloff