DYK: Did you know

To close ranks means to join with someone in a cause, or agreement.

In the old-time European armies, the soldiers were aligned side by side, in neat rows, or ranks, on the battlefield. 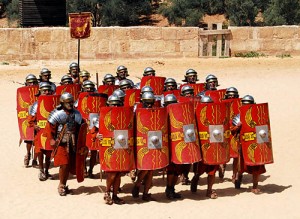 When the enemy attacked, officers would order the troops to close ranks; that is, to move the rows close together, so that the enemy faced a seemingly impregnable mass of men.