Toe the line means to was to position one’s toes next to a marked line in order to be ready to start a race, or some other undertaking. 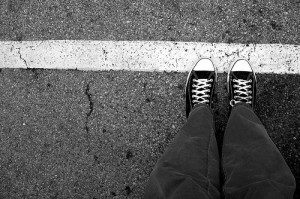 In the early days of the British Parliament, members wore swords in the House of Commons. To keep the members from fighting during heated debates, the Speaker of the House of Commons forced the Government and Opposition parties to sit on opposite sides of the chamber.

Lines, two sword-lengths plus one foot apart, were drawn in the carpet. Members were required to stand behind the lines when the House was in session. To this day, when a member steps over the line during a debate, the speaker yells: “Toe the line!”