While operating a small shanty that served hot beverages and snacks on a frozen river to tourists that were visiting the “Ice bridge”, a man heard the ice below him tremble and he immediately sensed disaster.

The morning was said to be a cold and misty one, the weather and the time of day, about noon, perhaps limiting the number of tourists, and so the scale of the eventual disaster. Red Hill Sr. frantically tried to wave the spectators to safety. 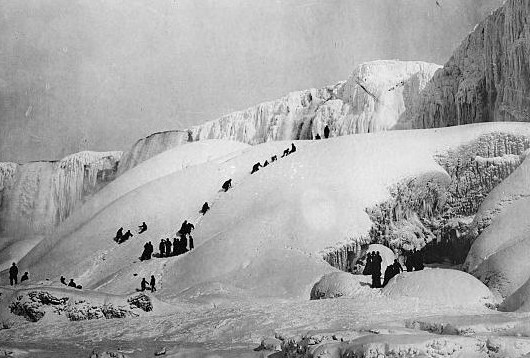 Evidently, it is not that uncommon of an occurrence

In fact, at one time the ice bridge that formed at the base as sheets of ice from the upper river went over the falls and fell to the rocks below, freezing there and growing larger as more went over.

In the early part of the century thousands of tourists would venture out onto the ice bridge that forms in the pool at the base of the falls during extremely cold winters.

The tragedy was described by WGRZ.COM as follows:

In the past, thousands of people would make the trek down to the base of the falls to enjoy an afternoon out. “It was a festive thing,” says Carol Rogers of New York State Parks Department. “They would put these makeshift shanties on the ice, and they would sell food, hot drinks, as well as alcoholic beverages.”

“Kids would go down there and play, and take their toboggans down,” says Bob Kostoff, a Niagara Falls Historian. “There would be big mounds of ice that they could slide down. It was an interesting thing that they really promoted.” 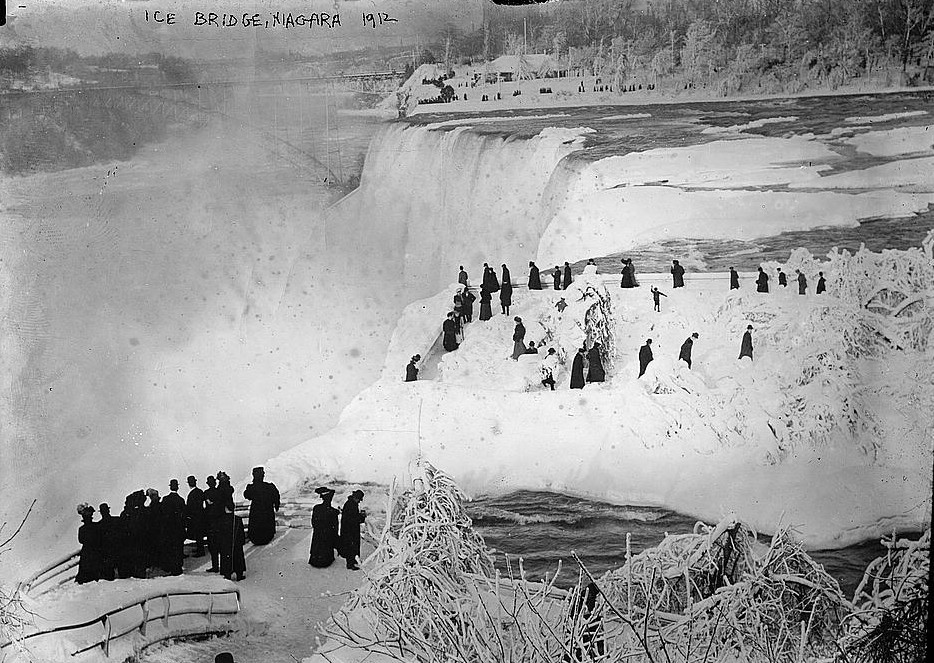 But all that changed on Sunday, February 4th, 1912, when a tragedy struck that would forever alter the lives of all involved and change visitors access to the Ice Bridge forever.

Crowds on the ice bridge sometimes numbered in the hundreds, but it was said that this day only about 35 people were there. Among them were Eldridge and Clara Stanton, a married couple visiting from Toronto.

“They had been down there before, it wasn’t their first time,” says Rogers. “They were married seven years, they regularly visited friends in the Falls, so this was just one of their weekend getaways.”

Also on the ice that fateful day were Ignatious Roth and Burrell Hecock, two 17 year old railroad clerks from Cleveland who were in Niagara Falls only because of a small twist of fate.

Burrell Hecock became a hero that day.  Hecock rushed toward the Stanton’s in a desperate attempt to save them. Hecock reached the Stanton’s and helped Eldridge lift his wife to her feet. Together they tried to get Clara to shore but the gap between the ice and shore was quickly widening. The three were now stranded as the ice bridge flowed ever quickly downstream.

As told by Ignatius Roth ““Burrell and I had crossed the ice bridge from the American side nearly to the Canadian side,” he said “We took some pictures and then started back toward the American side. There were a man and a woman near us. We were about in the mid­dle of bridge when I heard a cracking sound. I laughed, because it didn’t seem to be anything serious, and we did not run.”

Roth then caught the rope thrown him and was drawn to safety.

The bodies of the Stantons and Burrell Hecock were never found, and after this terrible tragedy, people were banned from walking on the ice bridge.

The ice was quite thick that year, almost 40 feet, but a large sheet of ice that plunged over the brink dislodged the bridge and set the wheels in motion for what would be one of the most dramatic events in Falls history.

Red Hill Sr. was a Canadian daredevil and rescuer, born in Niagara Falls, Ontario in 1888 and a legend in Niagara.  He realized the ice was breaking up below and tried to wave the spectators to safety on the Canadian side. Realizing that four people were still on the ice, Red Hill Sr. returned and managed to pull one person, a young boy to safety.

Three others were not so lucky, and despite frantic efforts to drop ropes from the bridges, the three terrified people were swept to their deaths, their bodies never recovered. Had it not been for the quick actions of Red Hill Sr. that day the tragedy could have been much worse

A News article described the event

DRIFT TO DEATH ON FLOATING ICE.

IN VIEW OF THOUSANDS.

THEY ATTEMPTED TO CROSS ICE BRIDGE, WHEN THE MASS BROKE AND THEY WERE CARRIED AWAY ON CAKES OF ICE.

Niagara Falls, N.Y., Feb. 5. — One woman and two men, who had ventured to cross the Niagara River near the falls on the ice bridge, were drowned in the whirlpool rapids, two miles below the falls, to which point they had drifted on the ice in full view of thousands who were helpless to render aid, though every effort was made.

Their names are MR. and MRS. ELDREDGE STANTON, of Toronto, Ont., and BURRELL HECOCK, of Cleveland, O.
A great mass of ice broke away and was swept by the current toward the rapids and pool. When the ice broke there were at least eight persons on the ice, but five of these are believed to have gained the shore in safety, some of them a mile below the falls and midway to the rapids.

Two men and a woman did not escape. One of the men floated on a cake of ice ahead of the other man and woman. When the jam started out the fact was phoned to the lower steel arch bridge and to the cantilever bridge, this latter being about 300 feet above the lower arch. Both stand directly over the entrance to the rapids.

Men with long ropes had rushed out from the Canadian and New York ends of the bridges and dropped the ropes down to the river, and then had moved along the deck of the bridge until right over the persons on the moving ice.

The first man grasped the rope and held it fast. The men on the bridge started to pull him up, but when he had been drawn up forty feet he let go and dropped into the river and was lost.

The other man and the woman next reached the rope as the current swept them on. The man caught the rope and seemed to attempt to tie it about the woman, but the current hurried them along and their chance for rescue was lost. They drifted under both bridges into the rapids in full view on the ice. They were seen to sink to their knees and then the waves washed over them and they disappeared in the seething, grinding mass of ice and water.

It is believed that the man first lost was about twenty-one years old. The woman was older. She wore a suit of gray, a white sweater and a big black hat with plumes. Some watchers believed she fainted when the man tried to tie the rope about her.

The current sweeps under the two bridges with great rapidity, and it may be that the rope was too short to allow of the movement of the current during the time he was trying to put the rope around her.

Persons who were near the falls when the jam broke say they are centain other lives have been lost. One man reports having seen a womana leap from the ice into the water near the upper arch bridge.

The thermometer has ranged around zero and the cold was intense in the gorge. For this reason the man and woman who died together must have been benumbed by the time they had reached the point of attempted rescue, for they were drifting nearly an hour.

Have you heard excessive brain labor causes baldness or the cure for wrinkles is a tepid bath in bran?Do you want to know Thomas Jefferson’s recipe for Vinegar of the Four Thieves or how to make Ox Tail Soup?Have you ever had ‘blueberry pickles’, ‘batallia pie’ or ‘snow birds’? You will learn all this and more in “Vinegar of the Four Thieves.”Our ancestors had to be resilient when they faced obstacles in daily life, from dealing with pests, medical emergencies, caring for clothing, and cleaning shortcuts. Almost everything they used in daily life was homemade. Some ideas were great but some were very strange.This book is a collection of household tips, medical cures, clothing care, and old recipes from the 1800s and 1900s. Many of the tips, such as the household cleaners, cooking tips, and ways to control pests, still work and are helpful in today’s ‘green’ environment while others such as ‘how to cure a dog of eating eggs’ will make you laugh. Either way, this book will help you appreciate the difficult life your grandparents endured.With Bonus: First two chapters of novel Ribbon of Love