The source of the idiom – LAUGHING STOCK  is unclear.

Stocks were a means of punishment in use at the time the phrase was coined, by which people were tortured or ridiculed. Victims were held by having their ankles, and occasionally the wrists too, trapped in holes between two sliding boards. 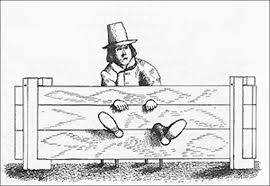 The punishment, although not as harsh as the pillory, in which people were confined by the neck, was severe and certainly not intended to be humorous.

It may be that the association between ‘laughing-stock’ and the practice of ridiculing people in the stocks grew over time.