Did you know that in the seventeenth century, a person’s social standing determined what he or she ate at dinners? The best food was placed next to the most important people. Also, people didn’t tend to sample everything that was on the table, they just ate what was closest to them. 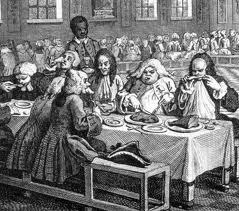 In the seventeenth century people weren’t served their meals individually. Foods were served onto the table and then people took the food from the table and ate it. All the servers had to do was move the food from the place where it was cooked onto the table. People ate with spoons, knives, and their fingers. They wiped their hands on large cloth napkins which they also used to pick up hot morsels of food.