*Note: Some of the language below may be a little antiquated because its excerpts and transcriptions from a the book  -Transcription from Historic Houses of New Jersey By Weymer Jay Mills .J. B. Lippincott Company – written in  1902 = The original words provide a unique glimpse of the people and early times in New Jersey.

Almost under the shade of the great Franklin Palace is quaint little Kearny Cottage, nestling like a sparrow under the wing of an eagle. It was erected about 1780 by Michael Kearny, and is still occupied by a member of his family,—a thing not unusual in this old township a decade or two ago.

Kearny’s belonged to the Irish gentry

Up to the time of the Civil War, life there was closely run on the lines of an old English village,—the woollen=draper’s daughter never thinking of speaking first to the lawyer’s wife,—and the equality among the classes which now reigns was then a thing unknown.

The Kearnys belonged to the Irish gentry, and soon after their arrival at the ancient capital became one of the important families of the place. Members of one of the younger branches left there some time previous to Governor Franklin’s rule and established themselves on a narrow jetty of land farther down the coast. They called it Kearny-Port, now corrupted to Keyport.

These Kearnys, of Kearny Castle, Kearny-Port, of which one-time elegant residence only a small portion remains, were socially prominent in New York as well as in the Jerseys. At the former place one of the younger sons, Major James Kearny, wedded the beautiful mother of Philip Freneau, the poet of the Revolution. 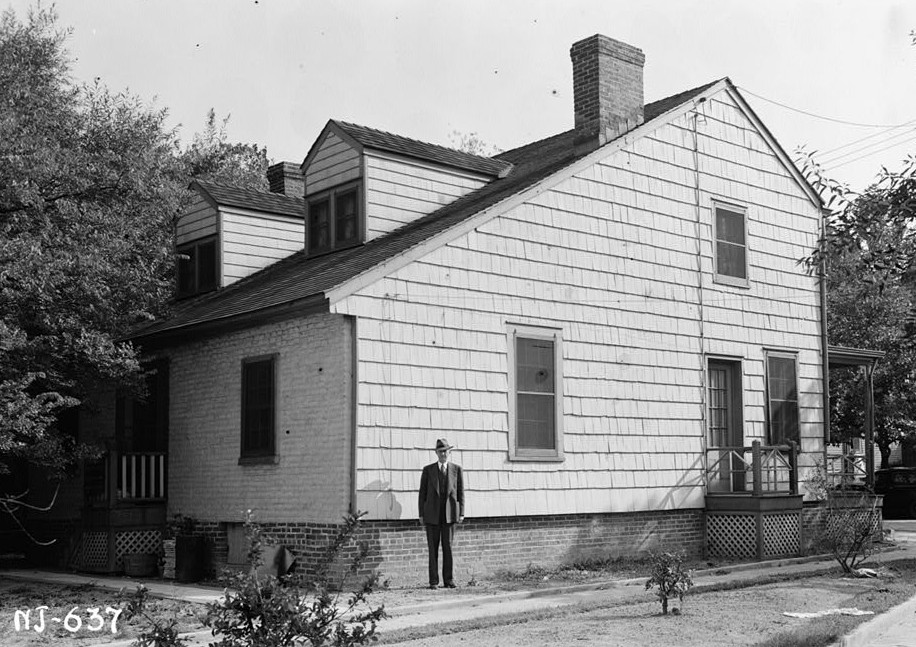 It is to this Mrs. Kearny, neeFreneau, who carefully preserved her letters and papers, that we are indebted for a few pleasing glimpses of the first mistress of the Kearny Cottage,—Mrs. Michael Kearny (Elizabeth Lawrence), better known to Perth Amboy and the literary world of her day as “Madam Scribblerus.” She sometimes signed herself ” Pinderina,” in the romantic fashion of the period, when writing to the press or to her intimate friends, who included the most prominent people of culture in the young republic.

This interesting figure, whose little rush-light of renown long ago flickered out, was a daughter of Judge Lawrence, of Burlington, and a half-sister of Captain James Lawrence of “Don’t give up the ship” fame, for whom she seems to have entertained an ardent affection, notwithstanding about fifteen years’ disparity in their ages.

Taught him the love of poetry

There in the rooms of her cottage, which look so small from the outside, but seem to widen mysteriously when one enters, she tells us in one of her faded scribbles that she taught this future hero the love of poetry. It is inferior to many of her verses, yet from its interest should be preserved. It reads:

“My brave, brave Jim’s a sailor Jack
Upon the treacherous sea,—
A sailor who loves poetry
All taught to him by me.”

It is to be hoped that young Lawrence was pleased with this poetic teaching when visiting his sister, of whom one of her intimates wrote: “She occupies the highest seat on Parnassus.”

Others in her Perth Amboy world did not take their occasional doses of the muse at all patiently. Betsey Parker, who lived once over at the Parker Castle, wrote to her sister, ” Oh, why won’t Madam Scribblerus stop her scribbling?” And her own household of growing boys is said to have openly scoffed at her effusions.

She spent winters in Philadelphia

But Madam Scribblerus still wrote on, despite the jeers of her friends and family; and she must have ridden her galloping muse at a rapid pace, if the one unpublished volume of her works, still in existence, entitled the seventh, is anything like its forerunners. In that, amid a chaotic mass of dolorous elegies and the chapters of a novel entitled “Altamont and Lothario,” written in a good imitation of the style of the once famous Madam D’Arblay, who set the London world agog when she was “Little Burney,” there are many references to the current events of the time and the country’s famous citizens.

During her girlhood she had spent several winters in Philadelphia, and in the first years of her marriage she made two or three journeys there to visit old friends. Among her intimates were Peggy Chew, a noted Quaker City belle who had replaced Honora Sneyd in Major Andre’s affections, the famous Shippen sisters, and “the dazzling Mrs. Bingham.”

She dedicated poems to his memory

Poor Madam Scribblerus! we can picture her to ourselves working away with her goose-quill pen in her little Amboy cottage, far into the night, with only a primitive candle to light her labors. Many and many a tired reveller, leaving those famous Brighton House balls in their heyday at the old Franklin Palace long before 1812 brought gloom and war, must have stopped before the light casting its glow from her chamber window and been cheered by the thought that some one was awake as he faced the darkness of old Amboy lanes and alleys.

The blue-stockinged Pinderina never looked with favor on those merry affairs where the conviviality often exceeded the bounds of the most proper decorum. Her “beloved Michael” died a few years before their advent, and she had no desire to don her rich pink brocade wedding-gown and appear again in society. The idea of constancy after death she cherished with touching faithfulness. Upon every anniversary of his departure from this life she dedicated poems of two or three hundred verses to his memory.

Those were sorry occasions for Amboy! The neglectful ones who evaded her cottage did so with fear and trembling. They were pretty sure of indignant visits from her, or worse still, her far reaching pen was capable of dealing them swift retribution.

She was against everything French

In the last years of the eighteenth century, during our breach with France, Madam Scribblerus conceived a violent aversion for everything French. Other Perth Amboy dames might look to France for their manners and their gewgaws, but she “detested” the nation. Taking the matter to heart, she set about to improve the perverted taste of the town, and hurled several bombastic poems at the “frog-eaters.”

Little of Elizabeth Kearny’s work ever saw the light of the press, and it is sad to think much that would have interested posterity should have been lost when the original manuscript was destroyed.

Deserves a small place in history

Although apart from Philip Freneau, Joel Barlow, and Timothy and Theodore Dwight, the four most noted disciples of American literature of the time, she deserves a small place in the history of our belles-lettres. In her own Perth Amboy she was a much lauded celebrity and had her large group of admirers. These were the solace of a life adversity had narrowed and blighted when in its full bloom. Their praise to her ears was the world’s sweetest lullaby. When surrounded by them she forgot the whispers of carping care and smiled with Calliope. 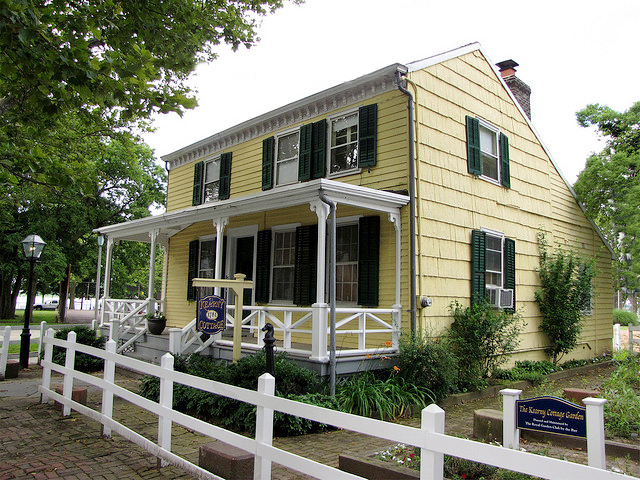 Built in 1781, Kearny Cottage was originally located on High Street but was moved to Sadowski Parkway when the last Kearny descendent died in the 1920s. The building was later moved again to where it now stands at 63 Catalpa Avenue, just inland from the mouth of the Raritan River. The four-room cottage is a museum operated by Kearny Cottage Historical Society and serves as a repository for many items donated by citizens of Perth Amboy reflecting the maritime history of its owners and the city. A colonial garden is located on the grounds.

* Agnes Watson, a Jersey beauty, married Pierre Freneau, of New York, in 1748, and became the mother of Philip Freneau, the poet of the Revolution, four years later. The Freneau mansion, on Frankfort Street, was one of the fashionable resorts of the early French society of New York City. As early as 1716 the family is recorded as prominent in the city, and it is several times mentioned in the interesting journal of John Fontaine, a kinsman of the celebrated Commodore Maury.

*  The house where Elizabeth Lawrence (Madam Scribblerus) lived as a girl is still standing in Burlington, at the corner of Main and Library Streets, and is now the residence of Mr. James Birch. Captain James Lawrence was born there, and in later years it became the residence of Governor Bloomfield. An old legend is still repeated in Burlington in reference to its occupancy by the Lawrence family. At one period of the Revolution, when some British ships were on their way to Philadelphia, they fired on Burlington, and a cannon-ball struck the building, which was taken as a sign that one of the family would die at the hands of the British. In the tragic death of Captain James Lawrence the omen or foreshadowing proved true.