With news of the Zika virus, mosquitoes are in the news again.  There was a time when they came close to stopping the growth and expansion of the United States and many other countries, especially port cities.

Death toll in Philadelphia was over 5,000

On October 11, 1793, the death toll from a yellow fever epidemic in Philadelphia hit 100. By the time the epidemic ended, 5,000 people, over 9 per cent of the total population, were dead.

Yellow fever was one of the most dreaded diseases in the port cities of the United States in early days. Doctors were uncertain of the cause of yellow fever and why it reached epidemic proportions so quickly.

Lazaretto Quarantine Station, Wanamaker Avenue and East Second Street, Essington, Delaware County, PA in 2005  was built after the 1793 epidemic in response to epidemic 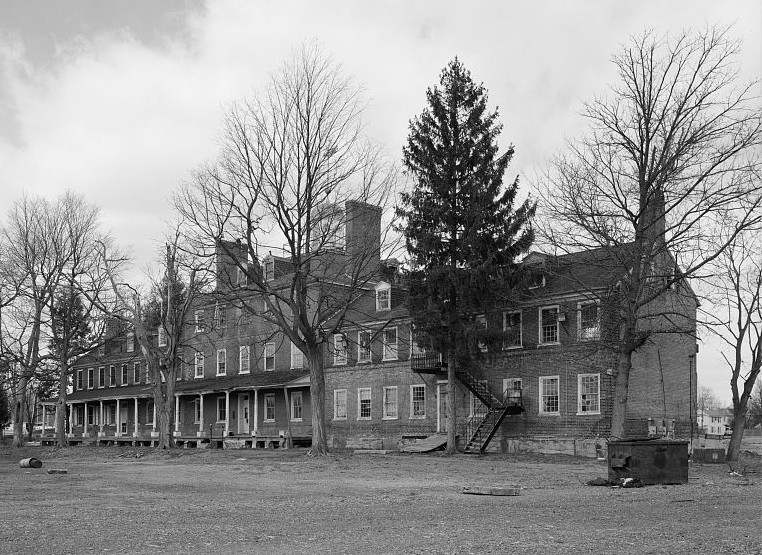 Yellow fever was not troublesome in tropical climates

In the tropical context, where deadly varieties of malaria were far more common, yellow fever was not of especial concern for the following reasons: 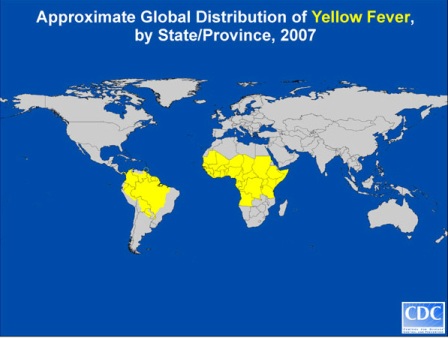 Virus was brought to Americas by slave trade

The virus as well as the vector Aedes aegypti, a mosquito species, were probably brought to the western hemisphere and the Americas by slave trade ships from Africa after the first European exploration in 1492.

The first probable outbreak of the disease in the western hemisphere was recorded by Spanish colonists in 1648 in Yucatan,Mexico, where the illness was termed xekik (black vomit) by the Maya.

At least 25 major outbreaks followed in North America, the first outbreak in the United States took place in the late 1690s. In the late summer of 1793, refugees from a yellow fever epidemic in the Caribbean fled to Philadelphia.

Within weeks, people throughout the city were experiencing symptoms. By the middle of October, 100 people were dying from the virus every day.

Caring for the victims so strained public services that the local city government collapsed.

Philadelphia was also the seat of the United States government at the time, but federal authorities simply evacuated the city in face of the raging epidemic.

The American government, including George Washington, had to flee the city.

Eventually, a cold front eliminated Philadelphia’s mosquito population and the death toll fell to 20 per day by October 26. 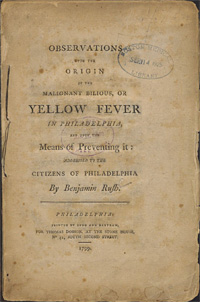 Mobile, Alabama has a severe outbreatk

In 1819, a severe epidemic at Mobile, Alabama from August 19 to November 30, resulted in 274 deaths. In 1822, a severe epidemic occurred in Blakely, Alabama, a port city that rivaled Mobile at the time with around 4,000 residents. It devastated the booming town.

The population never really returned and it is now a ghost town. Yellow fever cases waxed and waned each year from 1821 through 1843 when a severe epidemic occurred with 1,350 cases and 750 deaths.

As in other cities, the ‘Can’t Get Away Club‘, was a benevolent organization formed by brave citizens to help coordinate assistance in the form of funds, supplies, and medical professionals and volunteers.

A letter from Rev. John Wesley, Starr, Jr. written shortly before his death reveals how bad the situation was in Mobile.

The outbreak in 1853 killed thousands

The 1853 outbreak claimed 7,849 residents of New Orleans. The press and the medical profession did not alert citizens of the outbreak until the middle of July, after more than one thousand people had already died.

The New Orleans business community feared that word of an epidemic would cause a quarantine to be placed on the city, and their trade would suffer. In such epidemics, steamboats frequently carried passengers and the disease upriver from New Orleans to other cities along the Mississippi River.

starring Bette Davis. A ship carrying persons infected with the virus arrived in Hampton Roads in southeastern Virginia in June 1855.

The disease spread quickly through the community, eventually killing over 3,000 people, mostly residents of Norfolk and Portsmouth.

The Howard Association, a benevolent organization, was formed to help coordinate assistance in the form of funds, supplies, and medical professionals and volunteers, who poured in from many other areas, particularly the Atlantic and Gulf Coast areas of the United States.

Photographic copy of historic medal,The Yellow Fever Medal, presented to the Portsmouth Naval Hospital by the Town Council of Portsmouth, 1856 (Library of Congress) 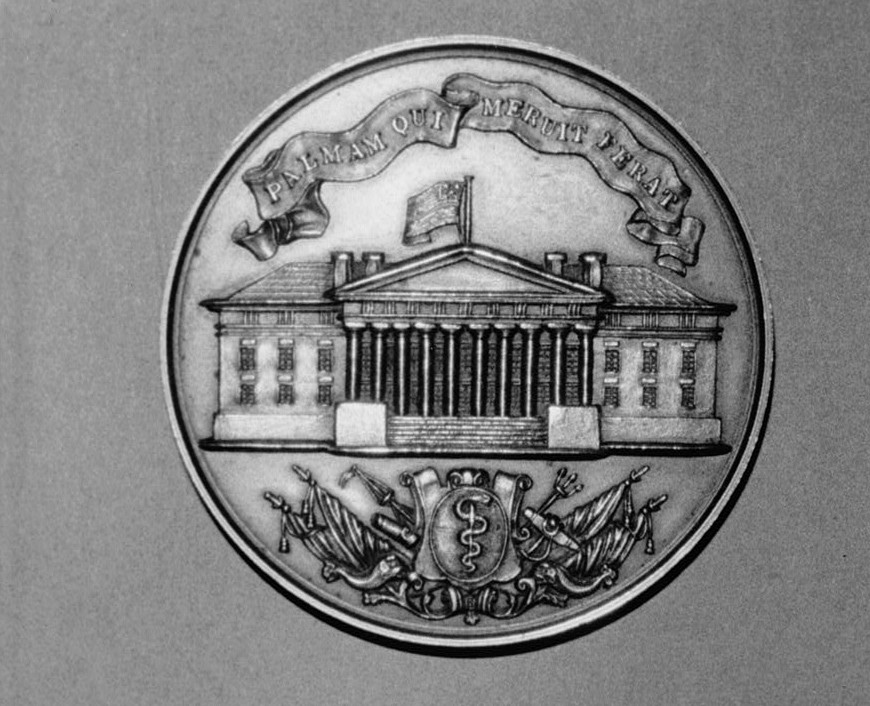 “In mid-August of 1873 men dropped dead on Texas Street in Shreveport, Louisiana for unknown reasons.

Then at least five people died each day. Reverend Dr. W. T. D. Dalzell of St. Mark’s Episcopal Church, who had visited Savannah, Georgia and cared for the victims of in the 1857 yellow fever epidemic there, tried to warn the officials that they had an epidemic on their hands.

Officials, who ignored Dr. Dalzell, tried to calm the panic-stricken city, but Shreveporters packed up their belongings and headed west to Texas and north to Arkansas.

The population shrank to about 4,500. East Texas communities set an embargo on traffic arriving from Shreveport, intercity commerce was halted, and all trains to the city stopped running.” 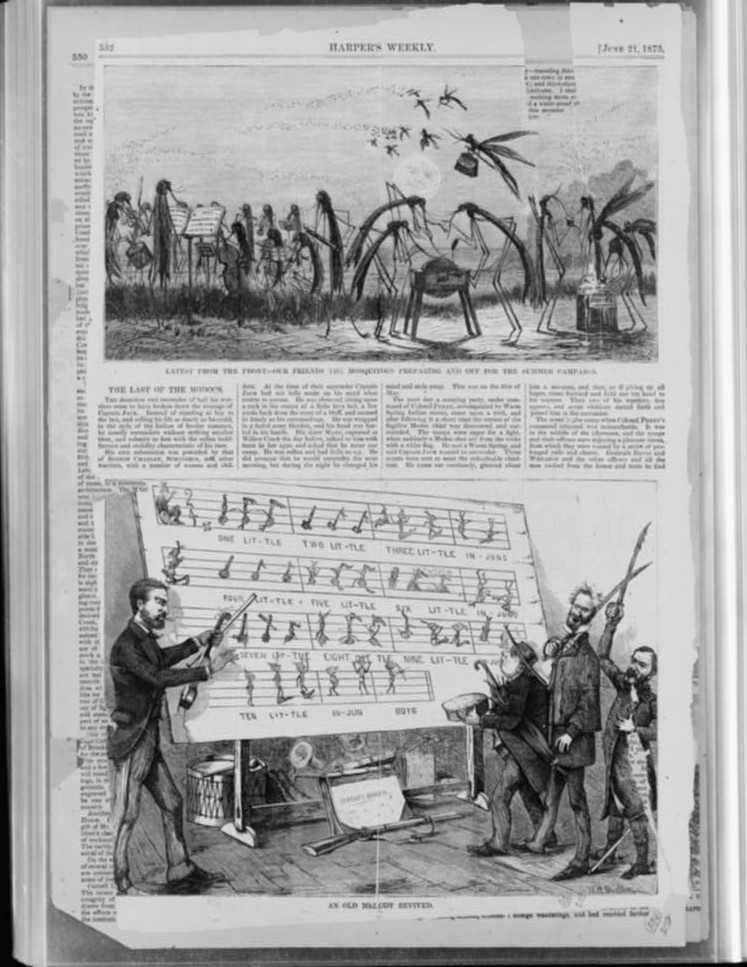 People did not understand how the disease was transmitted

Memphis, Tennessee suffered several epidemics during the 1870s, culminating in the 1878 epidemic (called the Saffron Scourge of 1878), with more than 5,000 fatalities in the city.

Some contemporary accounts said that commercial interests had prevented the rapid reporting of the outbreak of the epidemic, increasing the total number of deaths.

People still did not understand how the disease developed or was transmitted, and did not know how to prevent it. In 1878, about 20,000 people died in an epidemic in towns of the Mississippi River Valley and its tributaries.

The 1878 epidemic was the worst that occurred in the state of Mississippi. Sometimes known as ‘Yellow Jack,’ and ‘Bronze John,’ devastated Mississippi socially and economically. Entire families were killed, while others fled their homes for the presumed safety of other parts of the state.

Quarantine regulations, passed to prevent the spread of the disease, brought trade to a stop. Some local economies never recovered. Beechland, near Vicksburg, became a ghost town because of the epidemic.

By the end of the year, 3,227 people had died from the disease. This epidemic affected many cities throughout the south.

From 1882-1889 French effort to build the Panama Canal was damaged by the prevalence of endemic tropical diseases in the Isthmus.

Although malaria was also a serious problem for the French canal builders, the numerous yellow fever fatalities and the fear they engendered made it difficult for the French company to retain sufficient technical staff to sustain the effort.

The French hospitals contained many pools of stagnant water, such as basins underneath potted plants, in which mosquitoes could breed. The eventual failure, as a result of the numerous deaths, of the French company licensed to build the canal resulted in a massive financial crisis in France.

He felt that it was possible that the mosquitoes could bite infected people and spread it to others through their lancet.

Dr. Finlay’s research, except that they made sure their volunteers were non-immunes. By February of 1901 they had determined that the mosquito required ten to twelve days after it had bitten an infected person before it was able to transmit the disease to another.

While at Fort Brown, Texas in 1882–84, Dr. William Crawford Gorgas and his wife fell victim to yellow fever.

His wife, Marie Cook Doughty, whom he married in 1885 also had survived the disease.

Because of this, they were immune and he was sent to Havana, Cuba during the occupation of Cuba after the Spanish American War. The city was ravaged with yellow fever and malaria.

“Dr. William Crawford Gorgas first efforts against yellow fever were in Havana, Cuba where more than 500 deaths to the disease had been counted in each of the preceding ten years.

Gorgas assumed the herculean task of listing, inspecting, and controlling every possible breeding place in the city. Within months the city was clear of yellow fever and it was 18 years before another yellow fever death occurred.”

By the time the United States took control of the Panama Canal project on May 4, 1904, the Isthmus of Panama an estimated 12,000 workers had died during the construction of the Panama Railway and over 22,000 during the French effort to build a canal.

Many of these deaths were due to yellow fever and malaria. At several times, construction on the Panama Railway had actually halted due to the lack of healthy workers. 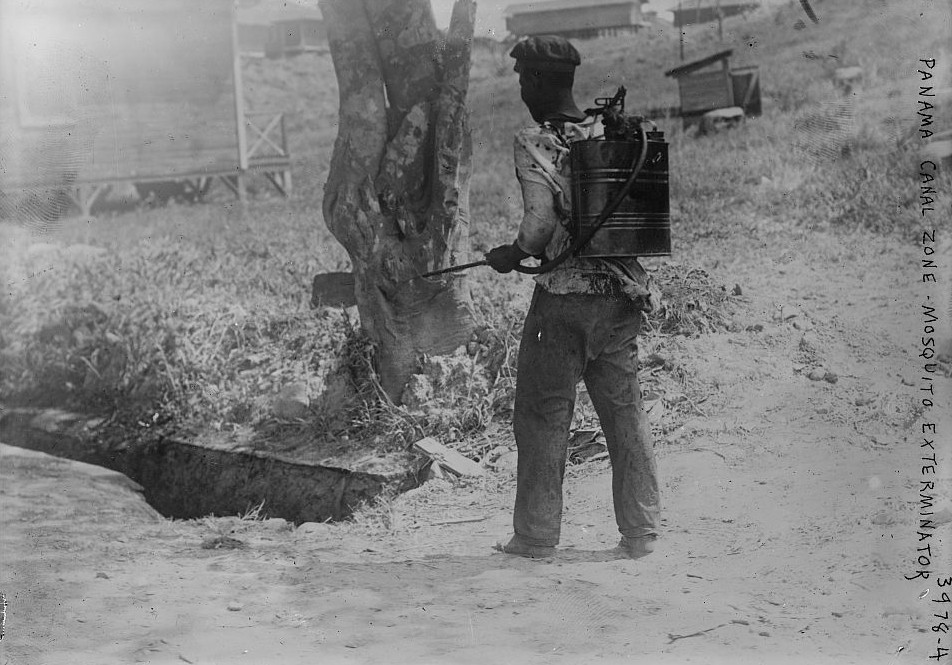 The Canal Commission appointed Colonel William Crawford Gorgas in March 1904 as head of hospitals and sanitation. Under his leadership, many new departments of sanitation were founded, covering different aspects of the sanitation problem.

Commissions were also formed to look after the basic welfare of laborers.

Utilizing similar programs Dr. Gorgas had instituted in Cuba, by 1906, yellow fever was virtually wiped out in the Canal Zone, and the number of deaths caused by the other top disease, malaria, was also reduced significantly.

The hospitals maintained were by far the best to be found anywhere in the tropics; some 32,000 patients were treated per year. The last major outbreak in the US occurred in 1905 in New Orleans.

If you want to get rid of mosquitos, drain the swamp that breeds them (Udo J. Kepler, artist 1909) – Political cartoon shows how much mosquitoes were on the mind of the people 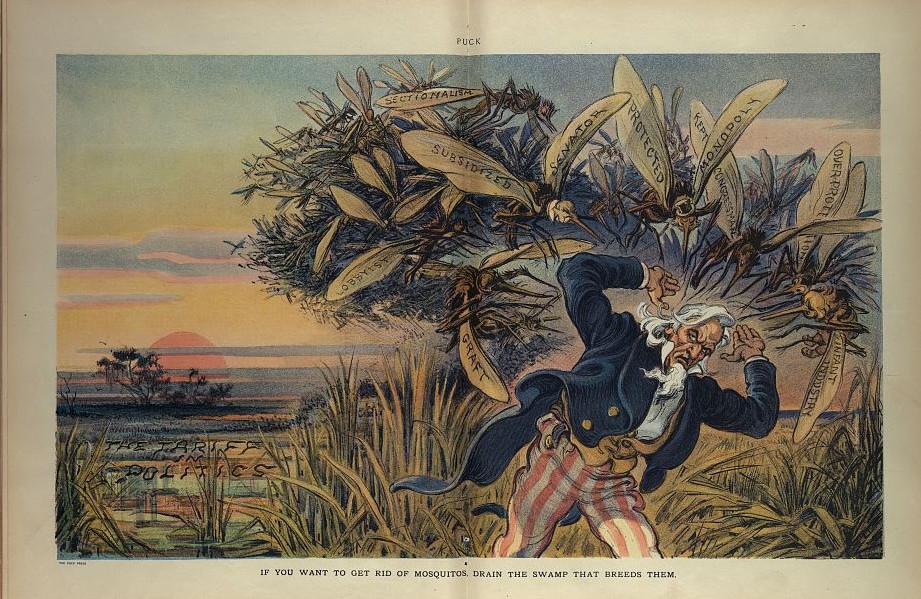 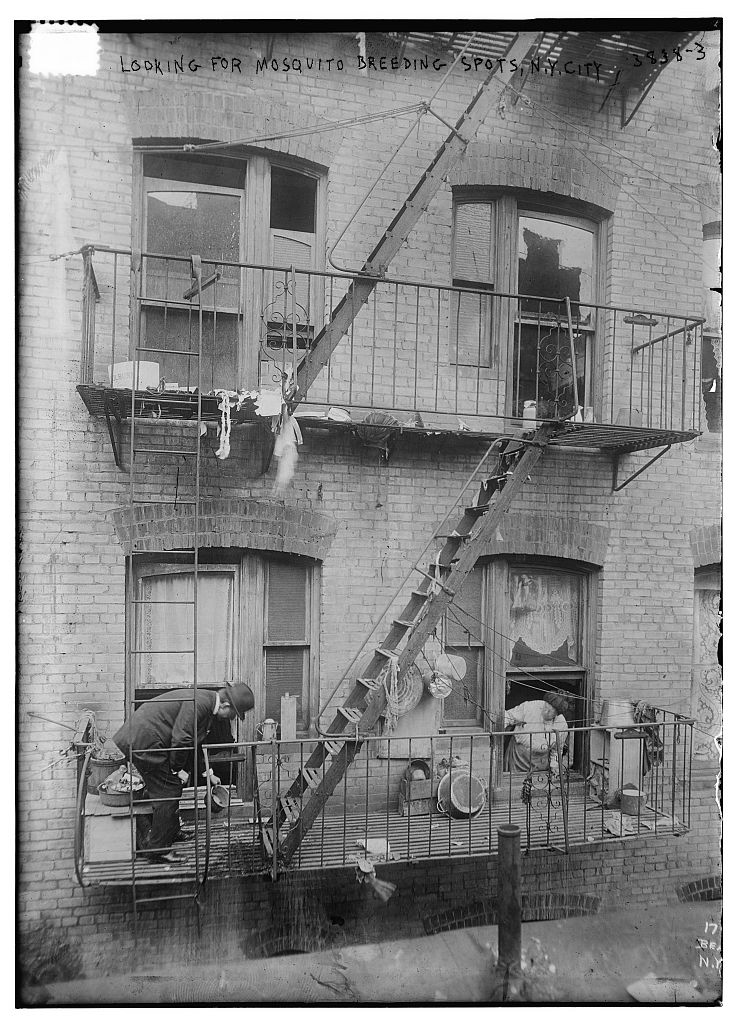 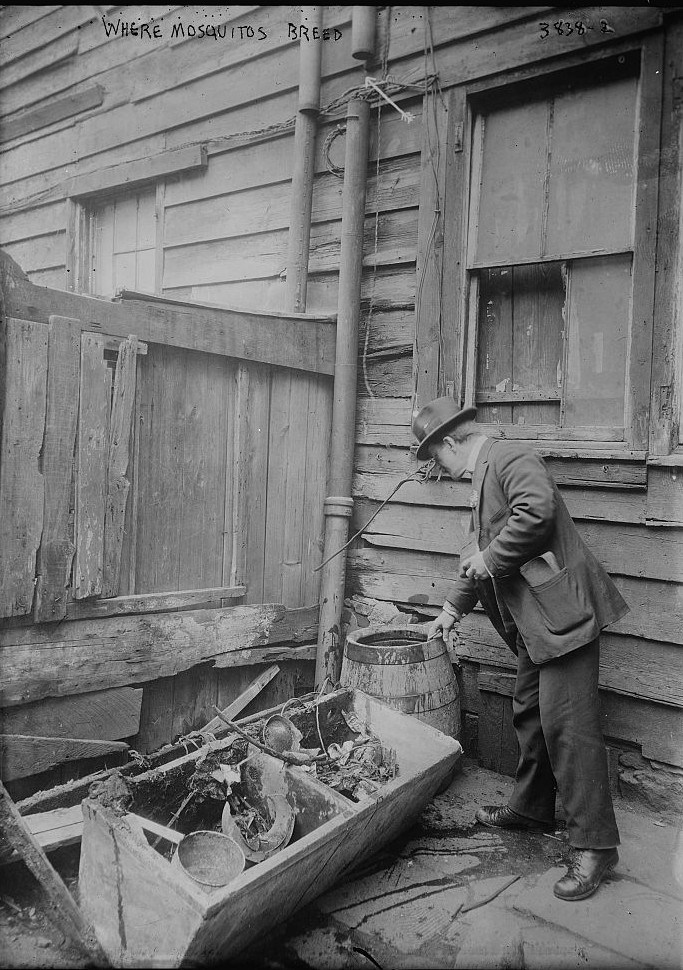 Spread by bite of female

The yellow fever virus is spread by the bite of the female mosquito.

It only infects humans, other primates and several species of mosquito. In cities it is primarily spread by mosquitoes of  the Aedes aegypti species.

In 1927, scientists isolated the yellow fever virus in West Africa.

Following this, two vaccines were developed in the 1930s. Today, a vaccine prevents yellow fever in much of the world, though approximately 20,000 people still die every year from the disease.