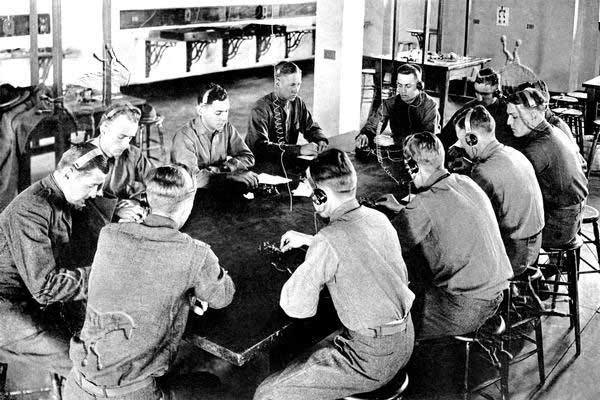 Remember those movies we saw during WWII in which our GIs tapped out secret messages to the commanders in Morse Code? Dot, Dot, Dash!

Early childhood memories come to me suddenly. A memory pops into my mind as if in Morse Code…. Dot, Dot, Dash! I must jot the memory down quickly so I can expound on it later. Webster defines dash as, “ Write hastily.” I call these written memories my “Dash Memories”.

One such memory was the annual Tom Thumb Wedding, which was held at the elementary school in Childersburg, Alabama each year during the early forties. This was a mock wedding put on by the school.

My brother, who was three years younger, was selected to be in the wedding party. I was so jealous! He was an usher and had to wear a tux and white gloves to escort each “Lady” down the aisle in the mock wedding. Mother made lots of pictures with her box Kodak camera.

Another event at Childersburg Elementary school was the springtime Maypole Festival. The tall pole painted white was set up on the lawn in front of the school.

Hung from the top of the maypole were streamers of pastel ribbon. The girls were dressed in organdy pastel dresses to match each ribbon. As the event proceeded the girls would slowly walk around the pole intertwining the ribbon. This was our celebration of spring and the result was very pretty when we finished.

My dad always wanted me to play the piano, so in 1943 he bought me a second hand piano and had it tuned. My piano teacher in Childersburg was Miss Daisy Lee who lived with her sister, Mrs. Lightsey about three blocks up the hill from the Baptist Church. She had attended the Talladega School for the Blind and majored in piano.

I always got a kick out of the game Miss Daisy and I played when I would meet her at church or came to her house for lessons. I would quietly go up to her and make her guess who I was. She would very lightly put her hands on my head and face and she would always guess correctly. I would giggle. I remember that her piano was located in her living room and it was always dark, only very dim lighting. As a child, I couldn’t understand this, if she was blind why the room was always so dark? Of course I never said anything about this to her.

One of my piano recitals was held at the USO Building in Childersburg on April 19, 1945. I discovered a faded program in a drawer I was cleaning out one day. Sadly, I never developed any talent in playing the piano, although I took lesson for several years. Five years ago I finally called the Goodwill Agency and donated the piano to them.

In conclusion, I would say that my “ Dash Memories” seem to surface more easily than what I had for the breakfast the day before! Dot, Dot, Dash!

Do you remember 4-H clubs? Eight-party lines? Fashion in the 1950s? Going to school during World War II?
In this collection of Alabama memories, Jean Butterworth takes readers on a nostalgic journey through growing up in Alabama during the Great Depression, World War II, and beyond. She pays homage to a time before the Internet, cell phones, and all of the distractions of modern life.
Readers of all ages will enjoy taking a step back in time and preserving these memories, which, like Chinaberry trees, may soon be hard to come by.