My Grandmother had a wild persimmon tree.  I learned at an early age to wait until the fruit was soft before attempting to eat it.  If I ate them too soon, my mouth would pucker. 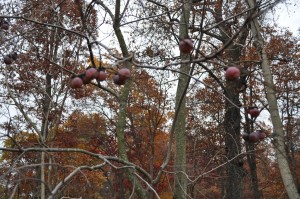 I delighted in collecting the calyx and stringing them to make a necklace.  My husband was pastoring a small church when he reached the age of fifty.  The members of the church had quite a celebration.  He was given a wooden hairbrush form covered with a bath cloth.  Of course, he was already missing a lot of hair; so everyone understood the joke.  A group of young people gave him a brown paper bag that contained green persimmons.  His instructions were to mash the persimmons and rub the goo on his bald head.  It would not grow hair; but would shrink his head to fit the existing hair. 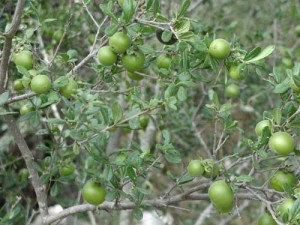 My mother planted a domestic persimmon tree.  In the Fall the tree was covered with tangerine size persimmons.  She would wait patiently until they softened before gathering them.  I saw some of those large persimmons at a plant market in Shelby County last Fall.  I commented to the clerk that it would take a while for those to ripen enough for consumption.  These were a different variety.  You could begin eating them earlier.  They were similar to the texture of a crunchy apple. 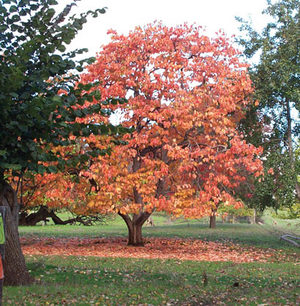 Persimmons originated in Japan and China.  They now are in Italy, the Mediterranean and Mid East; as well as the US.  Even though there are several varieties, two types are more readily available.  Both are the chalky orange color.  The Hachiya which is heart shaped grows in Japan; while the Fuyus from China is round.  The species from Japan is bitter and puckers the mouth.  It has to ripen until very soft to be edible.  The variety from China ripens sooner and can be quartered and eaten like a crunchy apple.  The variety grown in America is inedible until fully ripe. 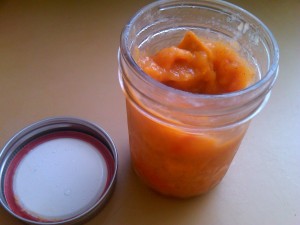 The persimmon fruit can be used for jams and jellies.  It is also used in salads and desserts.  This fruit is very healthy; high in vitamins, minerals, and dietary fibre.  The seeds, when roasted, are delicious as a snack or added to salad.  Sometimes the wood of the American variety is used as a substitute for ebony, from which some musical instruments are made.  Persimmon sales have more than doubled in the US the past year.