Memorial arch was a monument dedicated to a child

This is probably the earliest film taken of Stanford University in Palo Alto, California.

It was made in 1897 taken by Edison Manufacturing Company. The film is was taken at the above University, noted the world over, being the personal gift of the late Senator Leland Stanford.

Construction of the Memorial Arch was postponed, so that the first academic and administrative buildings, the Inner Quadrangle, could be built in time for opening day, October 1, 1891.”

The view in the film shows an immense arch in the background through which are seen coming groups of students, some walking, others on bicycles. The figures show life size, clear and distinct.

Could not be rebuilt after earthquake

Faced with this information, the University decided that Memorial Arch would not be reconstructed. The top of the Arch extending above the arcades was dismantled and the bases capped with pyramidal red tile roofs.

Today, the bases bearing the dedication plaque are all that remains of the original monument, but it is generally agreed that this alteration by natural occurrence actually improved the strength of the overall architectural ensemble of the Main Quadrangle.”1

Statue toppled off perch during earthquake

“A big marble statue of Agassiz was toppled off his perch on the outside of the quad and fell foremost into the ground (right through a cement walk) up to his shoulders, and still sticks there, legs in the air and his hand held out gracefully.

People came running from the quad with such sober faces, but when they saw him they couldn’t help laughing, and one fellow went up and shook hands with him.”

“Agassiz in the concrete” remained a legend associated with the earthquake period. According to one account, “Many stories were told about Agassiz’s natural instinct that when the earthquake came he decided to stick his head underground to find out what was going on in the earth below and with his finger pointing saying, ‘Hark! Listen!’2 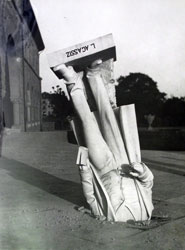 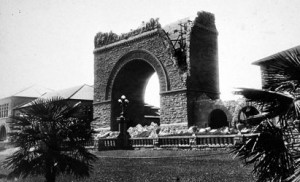 – Ribbon of Love was a wonderful love story of Henry and Mary living and struggling to succeed as one of the first families in the colony of Virginia in the 1600s. Inspired by real people and actual events; Ribbon of Love is a beautiful romantic story of colonial America woven within the framework of history